In a remarkable return to form, Dave “Chizzy” Chisnall won both matches in his Darts Premier League double header in Belfast last week to move within two points of the top four.

Darts Premier League: as it happened

Just weeks ago, Chizzy was looking elimination in the face, a downturn further highlighted by the fact that he hadn’t recorded a win since Exeter’s week five, when he also won two in one evening.

All that was quickly forgotten on Thursday however as Chisnall saw off Stoke pair Adrian ‘Jackpot’ Lewis and Phil ‘The Power’ Taylor. 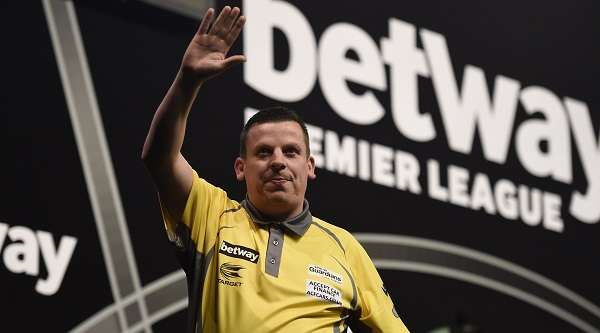 The 2015 Premier League semi-finalist began the night by seeing off “Jackpot” 7 legs to 3. Lewis, who last week hit a nine-dart finish, dropped the first three legs before he had even got started.

Winning three successive legs, Lewis looked set for a fourth straight victory before Chisnall landed a maximum to set up double 16 which he duly found. From then on, Chizzy dropped just one set to secure his first victory of the night.

Around 90 minutes later, Chizzy re-entered the arena to defeat Taylor in a match where he averaged 104 having raced into a 4-1 lead. After this, Taylor took just one more set as Chizzy saw out a very memorable night.

It wasn’t all bad news for Taylor. Earlier, he had seen off Gary Anderson 7-4. Anderson is having a dip in form at the moment and here he let another result slip away, this time from a four-set lead.

At four down, however, “The Power” morphed back into prime Taylor mode as the old consistency returned; T20 was found time after time while Anderson, despite his imperious lead, was restricted to just one shot at the finish, a missed bull.

Barney, now 50 years old, was shot down 7-2 but remains in contention for a place in the upcoming London finals. Mighty Mike, however, sits atop the league by two points with a game in hand. An appearance at The O2 looks like a mere formality for the world number one.

An apologetic Peter ‘Snakebite’ Wright didn’t need to be at his best to beat James Wade.

A poor-quality match between the two played out to a 7-3 victory for the Scot, who further strengthened his grip on second place before saying sorry to the fans for the uninspiring darts show.

Two the previous week’s losers open up the play this week at the Barclaycard Arena in Birmingham when James Wade and Adrian Lewis step up to the oche.

Wade, in eighth place, needs to make up four points on the top four places in order to throw himself back into contention for a finals spot. This looks increasingly unlikely.

Lewis also sits outside the qualification pool, albeit only by one point. “Jackpot”, possessing the better form currently, should take this opener.

Despite a brilliant week last time out, Dave Chisnall comes up against the worst possible opponent to meet when attempting to put a run together: Michael van Gerwen. Despite two great Chizzy throws in Belfast, MVG will look to wrap up qualification early here and should win with ease.

SkyBet have provided another great match treble for this one: Michael van Gerwen to win the match, hit the outright highest checkout and score more 180s at 15/8.

Phil Taylor this week plays Peter “Snakebite” Wright. Since his dull win, Wright has enjoyed tournament success in the inaugural German Darts Open and so comes into this match with confidence further boosted by his second-place position in the table, a place he should solidify here.

Out-of-form Gary Anderson meets Raymond van Barneveld next and, while I will be putting my money on Barney, if Anderson can recover from whatever he is going through he should be the winner.

He is, for now at least, the world number two and double world champion and he needs to put some points together soon if he is to make London.

Finally, Adrian Lewis and Michael van Gerwen will come back out for a second appearance of the night and bring Matchday 13 to a close.

Lewis has found some form recently but lost last time out and it’s hard to see him getting one over Mighty Mike.

This week’s accumulator: Lewis, MVG, Wright, Barney and MVG, which returns at a rate of 20.47/1 with tournament sponsors Betway.

It’s worth taking a look at the outright prices as the league stage has two weeks left to run.

With just four points separating the bottom-placed player and the top four, things are getting exciting.

You will have guessed already that MVG is odds on everywhere, but the best price available on Peter Wright is the 7/1 on offer with Bet365.

Despite falling behind in the table, Gary Anderson remains second-favourite in the betting and can be picked up for 6/1 with Betway.