Adrian Lewis Storms It To Set Up Dramatic Darts Night

Backers of Adrian Lewis were rewarded on Thursday night as “Jackpot” rewound the clock and staged a magnificent performance against Dutch master Raymond van Barneveld, including a perfect nine-dart finish. 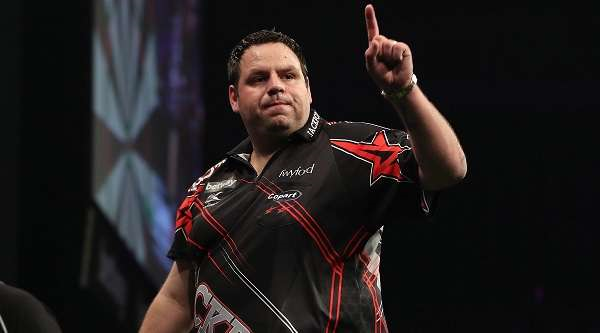 Let’s check out the action and see how our accumulators fared.

Taking the match 7-4, Lewis raced into a 2-0 lead before Barney began his comeback – a comeback that was emphatically ended in the fourth set after the two-time world champion Lewis took out the leg with his nine-darter.

Lewis’s form remained with him, largely unchecked, before he fittingly put the game to bed by landing on the bull.

Elsewhere, James Wade came from behind to beat Phil “The Power” Taylor 7-5.

At various points in the match, Wade looked in serious trouble, finding himself down by two sets on separate occasions, but an unanswered run in the last four legs gave Wade the points.

Earlier in the evening, Peter “Snakebite” Wright had to surrender himself to a draw with Michael van Gerwen having led by 5-1.

An unusually flat performance from the world number one saw MVG drop an uncharacteristic double in not only the first first set (allowing Wright to take that) and the following three sets. Wright raced into a 4-0 lead and that shock scoreline obviously sparked MVG into action; the Dutchman, where most would be unable, grabbed himself a share of the spoils.

The night’s opener also played out to a tie, one in which Dave Chisnall fluffed his lines at the last minute despite having the points seemingly in the bag.

With seven attempts to close out the match, “Chizzy” lost the form that had put him in such a good position following a fight back from 5-3 down against the world number two. Gary Anderson was allowed back into a game he looked to have thrown away before hitting a double 10 and claiming the draw.

The opener seemingly gave Anderson fresh belief as he finished off the night by beating Peter Wright in an all-Scots closer. Anderson, who had saved a point, played Wright, who had blown all but one of his.

Both were clearly feeling the mental impact of their earlier exploits. Anderson, who landed six maximums and averaged 113.44, saw off Snakebite with relative ease  in a 7-2 victory.

On Thursday, the players head to at Belfast’s SSE Arena for the twelfth week of Betway’s Premier League. Let’s look at some likely value as Dave Chisnall steps up for a double header, taking on the Stoke pair Adrian Lewis and Phil Taylor in bookend matches.

Just like Chisnall, Lewis has turned his league campaign around and sits sixth in the table, just one point off a playoff place. Amazingly, “Chizzy” can also still make the cut but will need to see off “Jackpot” and “The Power” to do so. He will certainly need to tighten up his double shots, too many of which have been dropped thus far and cost him plenty of momentum along the way.

Momentum, however, should not be a problem for “Jackpot” who has last week’s nine-darter to spur him on. Lewis to win then – and for some side action, this SkyBet treble at a tasty 9/2:

Gary Anderson sits third in the table and needs to beat Phil “The Power” Taylor, something he does with increasing regularity these days.

While we would never rule The Power out, Anderson has to be favourite in the night’s second match. The Power is well capable of course; at 2/1, he is a decent shout to break throw first in the match with Bet365.

Peter Wright and James Wade step up for the next match and while second-place “Snakebite” should claim the points here, his form has dipped alarmingly of late.

True, he nearly scored an incredible whitewash against the world number one last week, but his sloppy double shooting returned at the wrong time to snatch a draw from the jaws of victory. If he can hold his nerve better here, then a Snakebite win looks a sound bet.

Everything goes Dutch for the night’s fourth match as MVG and RVB meet in what I suspect might just be a draw. Mighty Mike has proven himself to be human in recent months and nobody seems to have the measure of him quite like his fellow countryman, who should be happy enough to share a point this week and stay in the hunt.

“Chizzy” and “The Power” return at the end of night and, as ever, earlier evening exploits will likely impact the final match. If, as predicted, both have dropped points earlier in the night then this might boil down to a test of mentality from which the 16-time world champion will surely emerge on top.