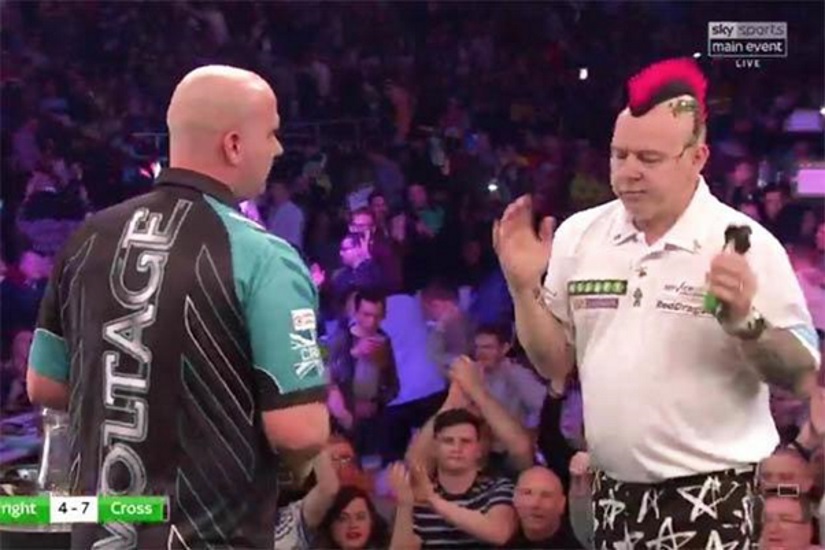 An angry Peter Wright refused to shake hands with Rob Cross after losing an ill-tempered match in Newcastle last week. Cross registered his first ever Premier League victory over world number two Wright, who was woefully out of form in the game’s closing legs. Snakebite has defeated Michael van Gerwen in the previous match.

Cross guaranteed himself at least a draw after he moved ahead 6-3. Cross then looked to have fluffed his lines when he squandered two match darts in the 10th leg where Wright banked a 101 to keep himself in the game. His mini-revival was not to last long however, as he went on to miss a crucial three darts. This left Cross to capitalise on the opportunity and land a double 16 and with it his first ever Premier League win. The match’s main talking point came shortly after its climax as Wright refused to shake Voltage’s hands, causing an unexplained row for which the Scot has since apologised.

In the night’s opening match, Mensur Suljovic took on Michael Smith with Bully Boy making it three wins from three in this year’s Premier League. Smith recorded two brilliant finishes of 72 and 68 to establish an early 2-0 lead before The Big Gentle responded brilliantly to level things out at 2-2. Smith wasn’t done there as he reeled off five straight legs, including finishes of 116 and 91, as he marched on to victory. This left the Austrian Suljovic cut adrift at the bottom of the table, without a solitary point so far this campaign.

The second match of the night saw Gerwyn Price fight back from 5-1 down against Daryl Gurney to secure a point against his fellow Premier League debutant. Superchin Gurney initially raced 5-2 ahead but saw his lead chopped back after Price took down 148 which brought the score back to 5-3 before landing the following leg. A superb 136 finish in the penultimate leg was equaled by Gurney, who secured his point following a 15-dart hold in the decider leaving both players inseparable.

In the night’s fourth match, Michael van Gerwen resumed normal service as he brilliantly beat Gary Anderson 7-3. MVG was back to his imperious best, averaging 110.62 and booking seven maximums to secure an awesome 7-3 victory and eradicate the memory of last week’s blip against Peter Wright.

Anderson himself averaged a decent 110.79, which included four 180s along with two 177s. Despite the strong start, Anderson found himself trailing 2-0 after the first two sets, a gap he closed in two legs before edging briefly ahead in the fifth courtesy of a 170 checkout. Mighty Mike equalised in the follow-up set taking the lead soon after. It was an advantage he never threatened to squander, ably assisted by Anderson missing seven darts at the double over the final three legs.

The action came to close after league leader Simon Whitlock maintained his 100% undefeated record by beating Raymond van Barneveld 7-4 in the final match of the night. Five-time world champion Barney had an off night, landing just 4 from 14 shots at the double. In contrast, his rival from Down Under, Simon ‘The Wizard’ Whitlock boasted an medicore 58% checkout success rate that might. On another night that have cost him dear but on this night was enough to secure yet another triumph, making it three wins from three on his Premier League return.

Here’s a complete look at the results from week 3 of the Darts Premier League:

The 2018 Premier League this week heads to the Mercedes-Benz Arena in Berlin on Thursday with coverage underway from 7 pm on Sky Sports Action HD and Sky Sports Main Event HD.

Thursday’s action gets underway with Michael Smith up against Simon Whitlock, the unbeaten League leader with Smith himself sitting second in the table. I keep thinking that Whitlock’s time at the top is up; however, while I’m convinced the bubble will burst soon, I don’t think that will happen this week, even with Smith’s impressive form. Both men were relegated in their last Premier League campaign, but it shouldn’t go unnoticed that The Wizard’s only major title – the European Championship – was collected in Germany, making this happy hunting ground for the Australian.

Next out are Gerwyn Price and Mensur Suljovic, with both men looking to pick up their first win in the event. Despite the Austrian being able to bank on the German crowd’s support — much like Price himself did last week in Cardiff — he has been woefully short of form and the only man to have lost all three games. This performance finds himself at bottom of the table and a favourite for the chop when the cut comes on judgement day five weeks from now. For this reason, I’m siding with the Welshman here to further strengthen his growing reputation in the game.

The night’s third match brings Michael van Gerwen and Daryl Gurney to the oche in a match I just can’t see Mighty Mike losing — and we all know why.

This match is followed by Rob Cross and Raymond van Barneveld, with Voltage finally looking like he is moving in the right direction following his dismantling of Peter Wright a week ago. Barney usually enjoys his time back on the European continent and the German crowd could be too much for Cross, just as the Irish were in Dublin on Matchday One when he crumbled in front of MVG. To be fair to Cross, he has a decent continental record in European Tour events and intriguingly is undefeated against Barney, winning three times. That said, I’m sticking with Barney to come on top in a close tie.

The most anticipated match of the night is the all-Scottish affair between Peter Wright and Gary Anderson which brings the curtain down on the night’s action. The last time these two played was in the Grand Slam of Darts semi-finals when Anderson fell apart and Snakebite was able to come back from 14-8 down to win 16-15.

For this alone, Anderson, evens at Betway, will be smarting and determined to set the record straight. Up one week and down the next, it is never easy to call Peter’s results, but he does usually do well in Germany, winning six tournaments there last year. And while Anderson has the upper hand, he also suffers from an ongoing back issue so I’m going to pick Snakebite in this battle of the Celts. Oddly, in the first three matches, the Scot has a draw, a defeat and just one Premier League win. But what a win it was, inflicting a rare defeat on world number one Van Gerwen two weeks ago, showing just what he can be capable of when he is on form.