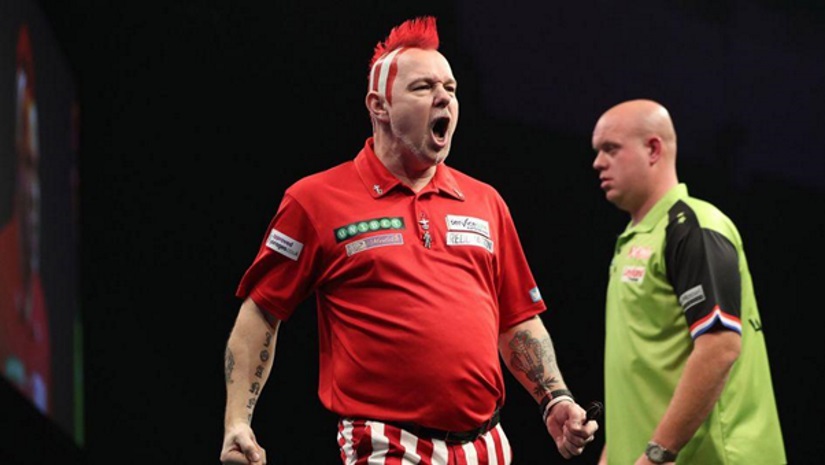 In another week of unpredictable upsets in the Darts Premier League, Peter Wright had one of those nights we all know he is capable of but seldom produces as he went on to shock Michael van Gerwen 7-5. Elsewhere, Rob Cross lost again, this time in a 7-1 thrashing by Simon Whitlock who, following back-to-back wins and a 100% record, now sits atop of the League after two weeks.

Snakebite could only manage an unconvincing draw with Gerwyn Price last week, but his outlook quickly improved early in the fourth leg as the pre-match 6/1 underdog maneuvered himself into a 3-1 lead before MVG raised his game enough to level the match. Wright though soon quashed his opponent’s rebellion, punishing the Dutchman for three missed darts at the double and taking out a 116 to move back into the lead. Before long he found himself within one leg of guaranteeing at least a point and victory within reach. Soon after, Wright landed his third maximum of the match on his way to a 12-darter, followed swiftly by a 13-darter.

Things are currently far less smooth for Rob Cross, however, as he suffered a second successive heavy defeat. This time his loss was at the hands of current League leader Simon Whitlock who battered the World champion 7-1 at the Motopoint Arena. Whitlock, by the way, this week fired out a warning on Twitter that the Instagram account swhitlock180 is fraudulent and in no way affiliated to the Aussie professional. So there.

Back to the oche where 27-year-old Cross has now lost his last six matches, with his only win since January 1st coming at the Masters first round against Ian White. Despite his current downswing, Voltage was the odds-on favourite pre-match but instead it was the Wizard who conjured up another win.

There were no such issues for Gary Anderson who comfortably won his grudge match against the Welsh crowd’s favourite Gerwyn Price, whose scoring simply let him down while Anderson produced his best performance of the season so far to win 7-3. Price did manage to bank an average of 92.71 but only chucked off eight shots at double whereas Anderson posted an average of 99.22.

Raymond van Barneveld scored his first win of the season with a 7-5 victory over Mensur Suljovic in a much tighter affair where both players averaged over 100. The game hinged on Suljovic missing three attempts at the double in the fourth leg leaving the door ajar for Barney to sneak in and land a 167 checkout to move 3-1 up, a lead that widened a leg later. From there, the remaining legs were shared equally leaving the Barney to take all three points.

The League’s only other 100% record was held on to after Michael Smith recorded a 7-4 victory over Daryl Gurney in the night’s opening match. Bully Boy stormed into a 3-0 lead, with the help of a 124 checkout. Numerous 13-darters and 14-darters were to follow before a fourth 180 of the match put Smith ahead 5-4. Smith capitalised on his rival’s four missed double attempts to go 6-4 up before nailing the final leg too.

The first game of the night features Mensur Suljovic and Michael Smith with the former currently on a great roll sharing the top of the table with a 100% win rate. In contrast, Suljovic is in the opposite situation, although it was Mensur that beat Smith in the Masters only a matter of weeks ago, making this something of a cloudy bet. That said, we’re putting our money on the Englishman at 11/8.

This match is followed by the Daryl Gurney and Gerwyn Price contest in which we’re siding with Gurney despite both players slightly under-performing at the moment. The reckoning here is that Gurney is showing the better form of the two right now. Again, Price should be more than comfortable against Superchin and actually beat him at the Masters, but I’m backing the Northern Irishman to emerge victorious this time around.

Hands up, Peter ‘Snakebite’ Wright caught me off guard last week. I was not alone in expecting World number one Michael van Gerwen to do what he so often does and wipe the floor with his opponent. Yet, it was the Scotsman who won on the day. He now meets up with another player to have beaten MVG at the oche, Rob Cross, who has barely won since. On that note, we could back a draw now, but given that I simply don’t have faith in Rob Cross on the Premier League stage right now, I’m selecting Snakebite to march on in the Premier League with another win.

Thursday’s match number four is a whopper as the world’s number one and two collide when Gary Anderson meets Michael van Gerwen. Mighty Mike was defeated last time out but won’t lose twice in a row so he can be safely expected to bounce back and win this week. This is even more likely given the grief Anderson keeps getting from his bad back which might continue to plague him again. Yes, Peter Wright managed the task last week but whether or not Gary is up to it yet is another matter.

Finally, league leader Simon Whitlock meets the legend that is Raymond van Barneveld. Barney is looking good on three points so far, and he’ll be aiming to leapfrog his opponent at the top of the table with a win. This is providing that Michael Smith loses the night’s opener against Mensur Suljovic. That, for me is more than enough encouragement to pick Barney on Thursday night.

Or if you are a bit more daring, try Michael Smith, Daryl Gurney, Peter Wright, Michael van Gerwen and Raymond van Barneveld, which is worth over 28 to the pound, again at Betway.