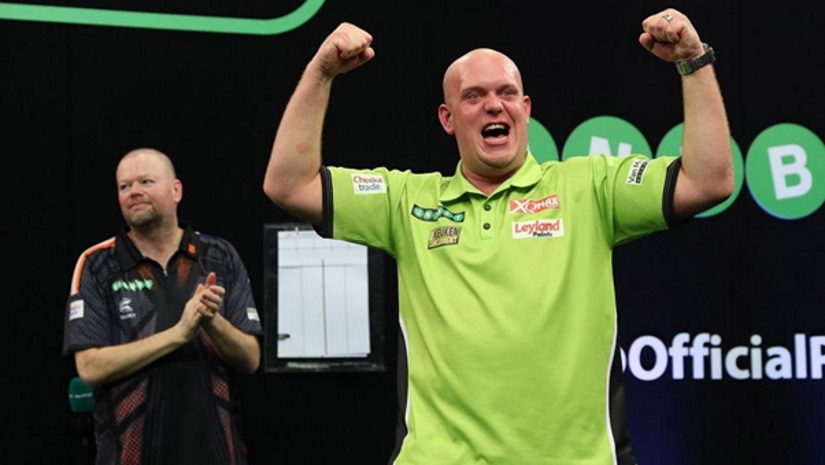 Gerwyn Price became the first eliminated from this year’s Darts Premier League and did so with a week to spare as Judgement Night in Liverpool finally comes around this Thursday. The Welshman’s fate was sealed after he lost 7-2 to a vastly superior Michael Smith, who continued his brilliant maiden league campaign.

Sitting pretty with 12 points, Bully Boy has six wins in eight and emphatically put last week’s heavy defeat by the same score line to Michael van Gerwen firmly behind him. Smith averaged 93.84 and banked a lone 180 while treating the crowd to a 160 checkout as part of the 15-darter on his way to victory.

A recap of last week

In the night’s opener, Gary Anderson recorded a hard-fought 7-5 victory over Mensur Suljovic, who remains in danger of elimination this week when he faces Mighty Mike. The Flying Scotsman posted an average of 97.41 and hit two 180s as Suljovic averaged 98.17. The Big Gentle did score a checkout of 124, which he closed on the bullseye, but that was as far the resistance lasted. Before long, Anderson moved 5-3 ahead and followed this up by producing finishes of 140 and 171 to set up a decisive 14-darter and with it the tie.

Michael van Gerwen was in a typically ferocious mood during his 7-2 win over his fellow countryman Raymond van Barneveld. The result consolidates Mighty Mike’s place at the top of the Premier League Darts where he currently enjoys a two-point and a +29-leg difference lead over Michael Smith. MVG averaged over 104 and hit 70% of his doubles while claiming six legs in a row after falling behind early. The victory marks the 30th consecutive Premier League match in which the world number one has averaged over 100.

A win for Daryl Gurney pleased the Belfast crowd in match number four. Superchin landed a near-record nine 180s during his brilliant 7-5 win over world champion Rob Cross. This tally was second only to the competition’s record of 11, which has been held by Gary Anderson since 2011. It was actually Cross who averaged the higher score of 100.16. Cross also hit five of his nine double shots, but Gurney — seeking a point to stay in the competition — just had too much for his rival.

Finally, Peter Wright moved out of the bottom two after he came back from 6-3 behind to rescue a point in his match against Simon Whitlock. Following three successive 7-1 defeats, Snakebite — who was runner-up in last year’s competition — went into Matchday 8 second-bottom in the table. Whitlock had initially led 6-3 which secured him at least a point before Wright landed a critical 11-darter to keep his Premier League hopes alive. Requiring double 16 for the match, The Wizard missed to let keep Wright alive. A 120 checkout for Snakebite forced a deciding leg, allowing Wright the chance to snatch a draw — which he duly did. Snakebite is now a point above Mensur Suljovic, who plays MVG next Thursday.

This week we’re off to Liverpool’s Echo Arena for Judgment Night after which we will be saying goodbye to another player, having lost Gerwyn Price last week in Belfast. Live coverage of the event can be found on Sky Sports Action HD and Sky Sports Main Event HD from 19:00 GMT.

We begin Judgment Night with Simon Whitlock against the relegated Gerwyn Price, who is now playing purely for pride alone. Whitlock, however, is still very much in the hunt for a top four place as he continues to show good form — enough to beat Price here certainly. If this match is as one-sided as looks, it’s worth picking Whitlock to win and hit the most 180s plus Price to average under 95, which is available for 9/4 at Betway.

Raymond van Barneveld and Michael Smith in match two is a much tougher one to call, but as much as it wouldn’t surprise me to see Barney win, Michael ‘Bully Boy’ Smith has been in such magnificent form that he deserves to see it continue. I’m betting he will as his confidence must be soaring right now. Neither player will be leaving the competition this round and the main focus is on the battle for survival, so this is all about hustling for position. Siding with Smith, I’m also backing him to hit a minimum of two 100+ checkouts in the match for 9/4.

Match three sees Gary Anderson take on Rob Cross in another very close battle. On paper, it’s Gary Anderson all the way, as we has won all five of their previous games. To be fair to Voltage, he is on a good role — in the league at least — but consistency has been fleeting, while Anderson has slowly but surely been picking up results after a slow start. I can see why the odds are with Gary, but Cross at his best could be ready to finally step up and beat The Flying Scotsman — and that’s what I’m backing him to do.

Everything hinges on the next match, which sees Mensur Suljovic try and pick up the vital points required to keep him in the tournament. It’s a shame for The Big Gentle then that his opponent is the near-imperious Michael van Gerwen. It’s also unfortunate that the match comes as Mensur has been playing a lot better than his position suggests, even if the league doesn’t lie. All the same, it looks like he’s heading out this week. It literally couldn’t be a tougher ask but Suljovic can draw some comfort from the fact that he beat MVG in their last meeting back in October. It probably won’t help though. Jump on van Gerwen to win by over 2.5 legs, average over 100 and hit a 110+ checkout at 9/4.

Having fought back to claim a draw a last week, Peter Wright is still not safe but might very well be by the time he takes to the oche for his match against Daryl Gurney. Either way, he still needs to start putting some points on the board in order to climb the table. It won’t be easy though; Snakebite has lost the last four meetings between the pair and is without a win in six in the Premier League. Superchin, on the other hand, beat Rob Cross last Thursday and again at the weekend. He is showing good form and is under considerably less pressure, which leads me to bank on him to win the match at 7/4. For maximum value extraction, let’s go with Gurney to win and hit the most 180s and both players to average under 100 at 9/2.