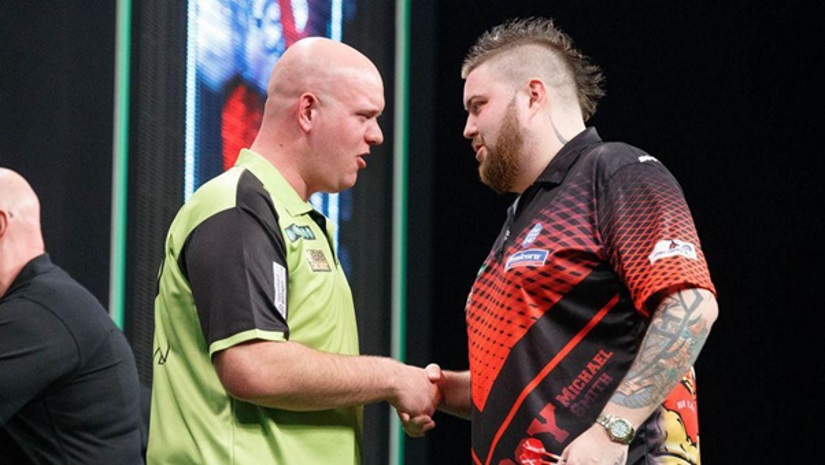 On his way to victory, Mighty Mike reeled off seven straight legs to take break throw in the first and take the lead. MVG was relentless after that, winning the following two legs in 14 and 13 darts before a 148 finish gave him a third. The world number one followed this up with a maximum in leg six and another 12-darter, before a 116-finish put the Dutchman just about out of reach. Almost banking a nine-dart finish in the next leg, van Gerwen rounded things off with a 107 finish for the match. In the loss, Smith remains in second, albeit on leg difference.

Birthday boy Daryl Gurney opened the night’s action and finally recorded his first Premier League victory, getting the better of Mensur Suljovic. Before Thursday, Superchin had drawn four from six, but in Scotland found the form he has been looking for. Hitting five maximums on his way to securing a 7-3 result, Gurney saw off the Big Gentle, who has now suffered two defeats in as many weeks.

Elsewhere, Gary Anderson pleased the Scottish support by beating Simon Whitlock 7-4, putting an end to a run of three successive draws. The first two legs went with throw before The Flying Scotsman took control of the game with a 101 finish. The next two legs also went to Anderson, before Whitlock rallied to cut his opponent’s lead in half. Anderson soon moved 5-2 up after The Wizard missed a shot at the bull, before the pair each banked a 13-dart leg. Whitlock held the 10th leg, but it was academic at this point as Anderson secured the win by taking out 74 to maintain his average of 102.68.

Amazingly, Peter Wright suffered his third straight 7-1 reverse, this time to Raymond van Barneveld, leaving him flirting dangerously with the cut. Priced at Betway as 6/4 to miss the cut, Snakebite — who made a European Final in Leverkusen over the weekend — missed four darts in the opening leg and managed to take the third, after which it was all Barney.

We closed the night with the same score line, this time recorded by Rob Cross who brilliantly swept aside Gerwyn Price 7-1. Voltage, who was 9/2 to win his inaugural Premier League title, averaged 103.54 and scored four 180s. Price took the first leg after Cross had missed a bull shot but one leg later the world champion drew level, taking out 143 for a 12-dart leg and with it the lead. He followed this up with a 11-dart leg and then three straight 14-dart legs before a final 66 to put an end to things. Cross now moves level on points with second-placed Michael Smith in the standings.

Here is a look at the 2018 Premier League Darts standings through eight matches.

The bottom two positions in the standings after Judgement Night in Liverpool on April 5 will miss the cut and be removed out of the competition.

The SSE Arena in Belfast will play host to Matchday nine of the Darts Premier League. As always, the live coverage can be enjoyed on Sky Sports Action & Main Event HD from 19:00 GMT.

Austria’s Mensur Suljovic is the first player out of the blocks this week for a match against Gary Anderson, who showed glimpses of his best form last week while back in Glasgow. Following back-to-back defeats in the Premier League and only one week to go before Judgement Night, the pressure is on Suljovic, who is being kept out of the relegation zone by leg difference only. I think this one should go quite easily to the Scot.

Next up, Michael Smith and Gerwyn Price meet at the oche in another, quite possibly, one-sided fixture. Price has lost the last six tournament matches he’s played, whereas Smith –- save for last week’s brutal beating to MVG -– is having the tournament of his life. I can’t see his form deserting him this week against a bottom placed Gerwyn who must feel as good as gone now. The potential difficulties for the Welshman are reflected in the following punt; Smith to win, hit 5 or more 180s and a 120+ checkout is priced at 10/1 with Betway.

We go double Dutch for match three as Raymond van Barneveld takes on Michael van Gerwen in a game that Michael will expect to win. It should be closer than some of Michael’s other challenges, as Barney seems to thrive in difficult matches — these two have a habit of bringing the best out of each other. That said, should Mighty Mike find his best form, it’s probably worth taking advantage of Betway’s 5/2 offered on MVG to win and hit 5 or more 180s.

The next match is followed by a much tougher game to call, Daryl Gurney v Rob Cross. Daryl finally registered his first Premier League win last week, which was nicely timed as the action moves to his hometown Belfast this week. His rival, Rob ‘Voltage’ Cross is on a run of five straight wins and is playing at his best level since the World Championship back in the deep mid-winter. How well he does here will depend on how he deals with the hostile atmosphere. It’s a toughie, but I’m calling a tie.

After three straight 7-1 defeats in the Premier League, Peter Wright drastically improved at the weekend by reaching the European Darts Open Final and will hope to take that version of himself into this week’s battle against Simon ‘The Wizard’ Whitlock. An early front runner, Whitlock has suffered a run of three defeats, which has seen the Aussie lose momentum and drop down the table. This one could go two ways: Either the original Snakebite turns up, buoyed by weekend form, in which case he should win; Or the other, a much worse version of himself could make a return, which is still very possible. For this reason, I expect the Wizard to take the points. I like the look of Whitlock to win OR draw, hit the most 180s and Wright to average under 100.

On that note, Anderson, Smith, MVG, X, and Whitlock all combine to make 53/1 on the Betway sportsbook. Don’t fancy that? Try the boosted treble; van Gerwen, Cross and Wright to win now 4/1 at Betway!