With its pub game background, darts can sometimes be a volatile sport – as proved back in June’s World Cup when Michael Van Gerwen and Adrian Lewis exchanged angry words in a World Cup row.

With this in mind, and no live darts to tip this week, we thought that now would be the best time to look back at five more memorable bust-ups on the oche.

After their 2012 World Championship semi-final at Alexandra Palace, Phil Taylor weirdly took offence to a strong handshake from his “friend” and competitor Raymond Van Barneveld at the end of the match.

Failing to see the irony, “The Power” (who won the match 6-4) claims to have been hurt by the big Dutchman’s strong post-game handshake, after which the pair became embroiled in a shoving match before a stroppy Taylor stormed off stage.

For his part, Taylor apologised by text to Van Barneveld, who immediately dropped the row and forgave Taylor. Taylor, after admitting that he felt ashamed of himself, even considered his future in the game at the time.

Speaking afterwards, Taylor said: “It’s upset me; of course it has. To put the record straight, Raymond is a very strong lad and when he shook my hand and pulled me, he hurt me a little bit.

“That was all it was and I reacted, to be honest with you, disgracefully. I am ashamed of myself and I feel terrible. At the minute, I could just walk away tomorrow night and retire.”

In truth, it is just as well Taylor didn’t quit at the time; he went on to win his 16th world title that year. 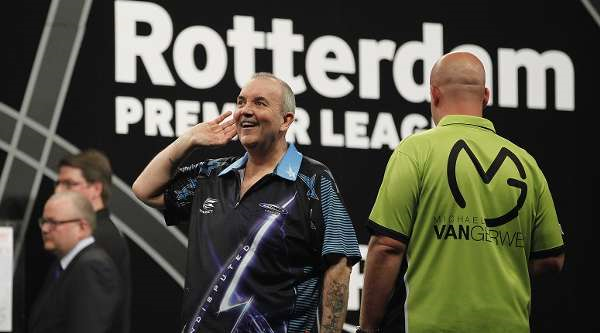 Pipe won the game to book a place in the quarter-final of that year’s event, but it was his body-popping, breakdancing celebrating that annoyed “The Artist”. Pipe, who has a slow throwing style due to a 1993 motoring accident that left him partially paralysed for three months, expressed remorse over social media following the wild celebrations that provoked such an angry response from his opponent.

In truth, the game was over when Pipe threw a double four and he should be allowed to celebrate – even if punching the air repeatedly before doing “The Worm” may be classed as excessive. Either way, a touchy Painter treated Pipe to a few strong pats on the back of the head before issuing an angry X-rated dressing down after the handshake had taken place.

Five years ago on a Premier League trip to Exeter, Michael van Gerwen and Peter Wright fell out over the latter’s attitude to crowd showmanship. Wright, at the oche, tactically played to wind up and annoy his opponent which, given Van Gerwen’s form at the time, looked like it would be a smart decision.

Looking like he was about to throw his dart, Wright, who bases his wind-up playing style on the wrestler Ultimate Warrior, turned to the crowd and called for more noise before going on to take his shot in front of a clearly annoyed Dutchman.

Unfortunately for “Snakebite”, he missed the double 20 he was aiming for but, despite making a fool of himself, the match was eventually tied 6-6. In the after-match television interview, the Dutchman said: “what that guy does has nothing to do with darts. He does it on purpose. He’s not a professional.” 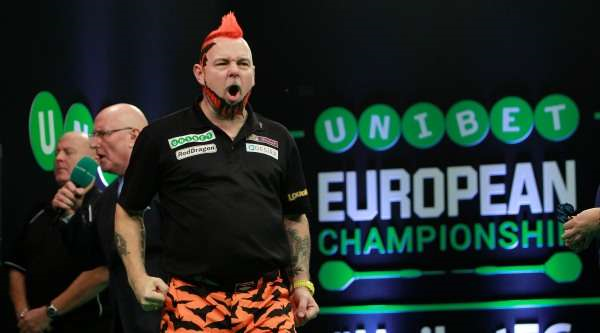 Back in 2011, at a UK Open quarter-final at Bolton’s Reebok Stadium, “The Asset” Paul Nicholson behaved more like an ass than an asset when he mockingly waved goodbye at the crowd after eliminating a stroppy Phil Taylor in the last 16.

The Newcastle-born Australian had already gained an aggressive reputation on the darts circuit but upsetting the king of the oche pushed the crowd over the edge.  Known as the “Bad Boy” of darts, Nicholson, wearing a tie and sunglasses, is not your usual player and this wasn’t the first or last time the pair have fallen out.

On this occasion, however, Nicholson won 9-8 before bidding farewell to “The Power” by finger-waving dismissively at the crowd while Taylor was collecting his match equipment. Taylor missed the dubious incident as it took place behind his back, but friends watching at home soon contacted him to inform him of Nicholson’s gesture.

Afterwards, Taylor had this to say: “I thought it was very disrespectful. I don’t expect people to bow and curtsy in my presence, but I’ve won 70-odd titles, including 15 world championships, and I think I deserve better than that.

“The next time Paul wants to wave me off into the sunset, or make sarcastic gestures at my expense, he should do it to my face and not behind my back. I don’t see why I should have to put up with opponents taking the piss when my back is turned. Fortunately, I know of a good place where we can put it right, just me and him. On the dartboard. We can sort it out there.”

For his part, the unpopular Nicholson insisted the gesture was not meant to be an insult.

Ten years ago, at a World Championship quarter-final match, Adrian Lewis was so upset at Peter Manley’s antics that he stormed off stage.

The event, back when it was hosted at the Circus Tavern, became heated after “One Dart” deliberately slowed down the tempo of the match when collecting his darts and at one point even paused after missing a shot at a double.

Lewis then accused Manley of swearing just as he was about to throw and lodged a complaint with the match referee, before exiting stage left while trailing 3-1.

Despite returning to the oche to try and claw things back, “Jackpot” eventually lost out to Manley, who is famous for these kind of shenanigans, and who went on to complete a 5-3 victory. A beaten Lewis, then just 20 years old, explained that “[Manley] turned round and said I was tutting when I wasn’t, and was saying things when I was throwing. I didn’t actually hear what it was but it was swearing. Phil [Taylor] told me to walk off if anything like that happened. But Peter beat me fair and square. I’ll be back.”