Place Your Bets For The European Darts Open 2016 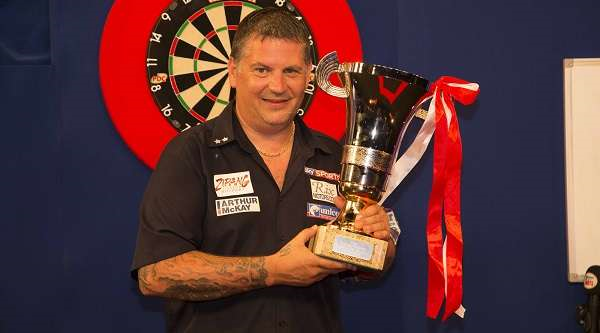 The PDC European Tour action resumed in Dusseldorf yesterday and, although some of the earlier first round matches will have started by the time you read this, the real action gets underway tomorrow when the big boys enter play.

The tournament runs from July 29 – 31 at the Maritim Hotel in Düsseldorf, Germany, with all matches to be contested over the best of 11 legs.

Absent from the sixth event of the series will be Phil “The Power” Taylor, beaten finalist in last weekend’s Matchplay final, and fellow Stoke thrower Adrian Lewis, leaving a clear straight shot for the likes of Michael Van Gerwen, Peter Wright and Gary Anderson, pictured above after his win in Tokyo. These all feature in a field of 48 players, including last year’s winner Robert Thornton (100/1), competing over three days of action for the £115,000 in prize money.

Darts man of the moment (indeed the past few years) Michael Van Gerwen is aiming to follow up last Sunday’s World Matchplay victory with his fourth European Tour triumph of the year, having also claimed the glory in Venray in the Netherlands, Munich and Gibraltar. Bet365, who incidentally will be streaming live coverage of the event, are laying evens for him to do exactly that.

World Champion Gary Anderson, himself having a storming 2016, is naturally the second seed and can be backed at 4/1, while fellow Scot Peter Wright is the next in the betting at 9/1, also at bet365. James Wade and Dave Chisnall are also in attendance and both are 25/1, although in the absence of England’s top two players it is hard to look beyond the first three, so we’ll go with Gary Anderson on this one as the only likely threat and challenger to the big Dutchman.

Save for Thursday’s qualifiers, the internet-streamed tournament begins for real on Friday with the first round where 32 qualifiers all face off, before the top 16 seeds enter play on Saturday in the second round, with the tournament concluding on Sunday.

The European Darts Open will be streamed worldwide through www.LIVEPDC.TV and bet365 for all subscribers.

Michael Van Gerwen made it back-to-back Blackpool wins last weekend when he saw off the challenge of Phil Taylor to win this year’s World Matchplay title, his 12th victory of 2016. 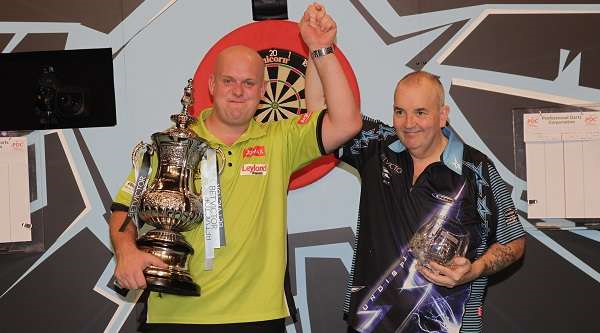 It was a brutal performance by the Dutchman who closed the game over fifteen-time Blackpool winner Taylor with an 18-10 victory at the Winter Gardens on Sunday evening, hitting two-thirds of his darts at doubles as well as 12 maximums.

Van Gerwen lost to Taylor on the Winter Gardens stage two years ago, but there never looked like there would be a repeat of the defeat even after a maximum helped Taylor take the opening leg. Van Gerwen responded immediately and closed at 70 to level and 77 to break Taylor’s throw in the third leg. Soon after, a brilliant 11-dart finish, which included two 180s, saw the Dutchman move 3-1 ahead.

Taylor struck back in the fifth leg and finished 70 on the bull, only for MVG to respond with a two-dart 93 checkout which was followed by finishes of 65, 110, tops, 63 and 76 over the next six legs to move 11-4 clear of Taylor.

Taylor won two out of the next three, and also claimed legs 11 and 12 to pull things back to 13-8 but a 13-dart finish from the Dutchman was followed by a checkout of 112 as the match swung firmly in the Van Gerwen’s favour. For what is was worth, Taylor rallied once more with a 130 finish and then took out 81 for a 12 darter to stay within touching distance at 15-10, but, with the end in sight, Van Gerwen landed double 16 to complete a brilliant triumph.

The win here means that van Gerwen becomes only the third player in history to retain the prestigious World Matchplay title, a feat shared only by the vanquished Taylor and Rod Harrington back in 1998 and 99.

Van Gerwen said: “It feels amazing to win this title again. I think I played well all through the tournament and I dominated the final – against Phil you always need to step up a bit and I did. To beat Phil is always nice because he’s a legend and I’ve got so much respect for him. He knows that and that makes it even better to win this trophy by beating him.”

Top Five Darts Bust-Ups And FightsTaylor’s Made For Blackpool: The Power Is A Must Bet