Michael van Gerwen and Raymond van Barneveld led The Netherlands to their third World Cup of Darts title last weekend after they saw off the challenge from Welsh pair Gerwyn Price and Mark Webster in Sunday’s 3-1 final win in Frankfurt, Germany. 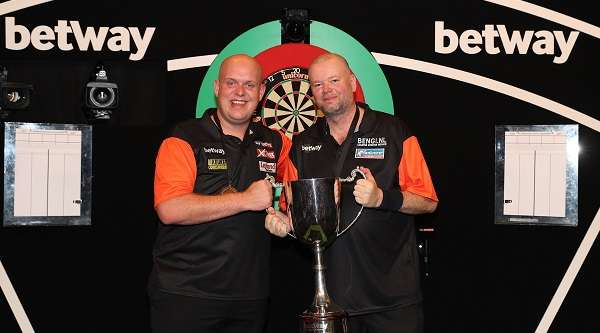 World Cup of Darts: how it happened

On route to the final the Dutch pair, second favourites to Scotland, faced the Czech Republic, USA and Germany before seeing off England’s pairing of Dave Chisnall and Adrian Lewis in the semi-finals.

Scotland were shot out early in a massive shock loss to Singapore, a match that the Scottish pair Gary Anderson and Peter Wright were 1/20 to win; for a team made up out of two out of the world’s top three players, this was hugely disappointing for everyone except the bookmakers.

As top seeds, their 5-2 defeat at the hands of Paul Lim and Harith Lim provided the game with by far its biggest upset of the season so far.

Beaten finalists Wales were the best-represented home nation having won against the Republic of Ireland in a first round 2-0 before repeating the score against both Russia in the quarter-finals and Belgium a round later in the semis.

Gerwyn Price, incidentally, will now take Adrian Lewis’ place in the World Series of Darts events in Shanghai and Las Vegas next month as “Jackpot” chooses to remain at home with his wife who is expecting a baby this summer.

UK Open finalist Price, whose professional career is definitely on the rise, was crushed in the opening round against the Dutch as MVG ran out a 4-0 whitewash against the 32-year old Welshman.

Wales immediately drew back level though as Mark Webster beat Raymond van Barneveld 4-1 but from then on fell behind to an all-too-powerful Dutch display. Barney and Mike won the remaining legs to mark a 3-1 victory and crown themselves champions.

Up next, there is the European Tour’s ninth leg which begins in Hamburg this Friday and for which there is a smattering of bets available.

All of said bets are with Bet365, as SkyBet and Betway chose to sit this one out.

It’s a quiet week and these odds are all outright winner prices, such as the 4/6 available on Michael van Gerwen and 7/2 for Peter “Snakebite” Wright.

The likes of Phil Taylor, Raymond van Barneveld and Gary Anderson will not be in attendance, meaning Dave Chisnall is next in the betting at 16/1 ahead of Adrian Lewis at 25/1 and James Wade who, at 33/1, is worth an outside each-way punt.