Another week, another title for Michael van Gerwen!

This time, it was a European Tour title – his second of 2017. He beat Mensur Suljovic in the final of the European Darts Matchplay in Hamburg. 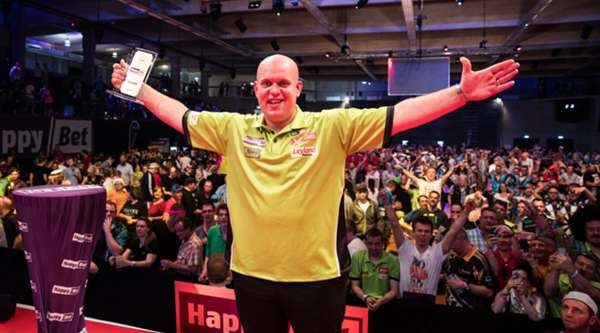 Opening with a 136 checkout to capitalise on Suljovic’s missed double 10 in the first leg, Mighty Mike never looked like faltering from there on.

In fairness, Suljovic started well enough himself, holding his throws until the fourth leg when the Dutch world champion broke by way of a 180 (his second) and a 25 checkout to move 3-1 ahead.

A third 180 allowed the Dutchman to further pull away a set later before Suljovic clawed a leg back. This proved futile. A 75 checkout in the final leg gave MVG his 16th European Tour title and the £25,000 top prize.

Earlier in the run, van Gerwen had dismissed Mervyn King in a 6-3 victory, landed a 5-0 win over Peter Hudson and eliminated Michael Smith to make it to the final.

The European Tour continues in a fortnight with the Austrian Darts Open in Vienna.

As we reach the halfway point of the year and with no event this week, now seems as good as a time as any to take a quick look at the ante-post betting for December’s World Championship.

Unsurprisingly, MVG is the man to beat, something nobody has managed to do for a while now as he has racked up a pair of World Championship wins.

Since then he has remained pretty much invincible landing the Darts Premier League and, in partnership with Raymond van Barneveld, the Darts World Cup.

At 4/6 with both SkyBet and Betway and 8/15 at Bet365, even at this early stage there is no value on the Dutch master.

Is Anderson made of the Wright stuff?

Gary Anderson is a best price of 6/1 with SkyBet but it has been awhile now since he looked MVG’s closest challenger.

For our money, that title has gone to Anderson’s countryman Peter “Snakebite” Wright. As frustrating a player as he can be, has at least maintained some momentum in being this season’s bridesmaid. He finally landed his first televised PDC win back in March, when he claimed the UK Open.

Snakebite can be backed at 6/1 with both Betway and SkyBet and with each way bets paying a quarter of the odds, looks as good a bet as any to make money on, paying out at just over even money.

He’s got The Power

What about one last shot at glory for Phil “The Power” Taylor?

The legend will bow out from the game that he has served so well in January, when the Championships are over and will likely move onto the veteran’s tour or Sky punditry.

A win for The Power is an unlikely shot, but one which will appeal to arrow romantics and worth 18/1 with Betway.

The same sportsbook is offering 22/1 for Adrian Lewis – quite unlikely at first glance, but he has won twice at the Ally Pally before so shouldn’t be dismissed for nothing, however horrible his 2017 form has been.

Bet365’s 33/1 on Dave Chisnall has been matched by SkyBet for those interested, while Betway are laying 40 on James Wade.

Who Are The Best Darts Players Of All Time?Double Dutch Darts World Cup Title For Michael Van Gerwen And Barney