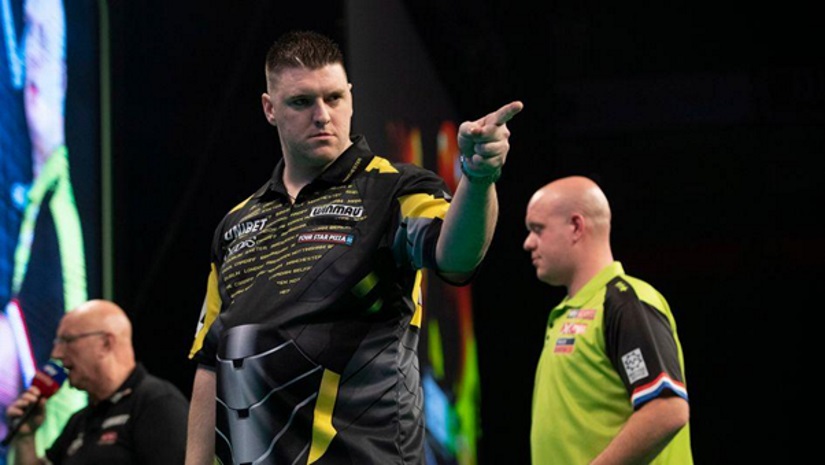 Daryl Gurney recorded his third successive triumph over Michael van Gerwen on Thursday as he ran out the 8-5 winner to blow the league wide open. The win also means that Superchin becomes only the second player ever to complete a Premier League double over the world champion, the first being Peter Wright last year.

Gurney now finds himself fourth in the table and with every chance of making the playoffs. Meanwhile, MVG loses top spot with just two weeks to go, meaning he could — for the first time in seven years — not top the table at its conclusion. There is even an admittedly slim chance that he might not make London at all, but I wouldn’t bet on it. Mighty Mike was way short of his normal game and fell 4-0 down early on in the contest before landing a 127 checkout to inspire a little hope. After van Gerwen took the following leg, the Northern Irishman took another two to hone in on victory, which came not too long after.

MVG now finds himself one point behind Rob Cross, who defeated Michael Smith in a brutal beating at the start of the night in a match that now secures at least a playoff place for Voltage. Cross averaged 102.54, hit five 180s and landed eight of his 14 doubles in a thoroughly one-sided contest that was never in doubt. So dominant was Cross that in seven of the eight legs that he won in six darts or less. The tone was set early doors after Cross hit a 101 checkout to take the first and from there the win looked inevitable, reeling off the next four legs. Bully Boy, who averaged a surprisingly high 97.65, finally got points on the board when he took the sixth, but thereafter the 2018 world champion was unbeatable in the next three, cleaning up in 33 darts to put the game to bed.

There was a typically bad-tempered match between the league’s two pantomime villains in the night’s final match in which James Wade overcame the challenge from Gerwyn Price. In a playoff fight, the Englishman claimed an 8-4 victory over the Welshman, who refused to shake hands after the game. Both players have previous experience when it comes to winding opponents up, but Wade didn’t appear to do anything wrong so it’s hard to see where The Iceman lost his cool. However, it did look like Price’s game plan, which backfired, was to slow throw his opponent, a tactic which has worked for others against The Machine in the past. To be fair to Wade, he didn’t take the bait and kept calm to claim a fairly routine win. Wade, winner in 2009, now sits third in the table, while Price sinks to sixth with two points between him and the top four. Price slowed down his game for the night and was 3-0 down before getting back in the game one leg later with an 11-darter. Soon after, Wade restored a three-leg advantage when Price pulled back another leg. The Machine then proceeded to killed finish him off with 12 and 14 dart legs.

In match two, Peter Wright was once again the victim to defeat. This time to Mensur Suljovic, who almost threw the game away but chucked a decent 12-darter in the final leg to keep himself in the hunt for a playoff place. The Gentle started the night with a 144 checkout as he raced into a 5-1 lead. Snakebite, who actually climbed off the bottom on leg difference, found some fight in the seventh and went on a winning run of three in a row to give Suljovic a fright. The Austrian kept going and soon found himself shooting for the match but missing twice. This slip let Wright back in forcing a deciding leg, which went the way of The Gentle, who averaged 93.91 compared to Wright’s 89.49.

It’s over to Sheffield for DPL Night 15 where all eyes will be on the race for the top four. We open with James Wade and Michael Smith, with The Machine looking to take the points needed to further cement his bid his for a playoff place. Wade was helped enormously by his squashing of Gerwyn Price last week. Bully Boy returned to the bottom of the table in Manchester after he was battered by Rob Cross. There is little reason to believe he will fare much better this week, especially when given statistics that weigh heavily in Wade’s favour and show the Machine to have beaten Smith in 16 of their 19 meetings.

League leader Rob Cross takes to the oche next as he looks to beat playoff hopeful Mensur Suljovic and stay top for another week, with only Leeds left on the schedule to play before London. Following his win over Smith, Voltage is now Betway’s 5/4 favourite to finish first at the end of the campaign. He has done well to topple Michael van Gerwen so far, who has topped the table for the past six seasons. The Gentle currently occupies the final playoff place, aided last week by securing a wobbly win over Peter Wright. Form-wise, both of these players have won six in twelve, but Cross is playing like a world beater right now and so must be favoured.

Daryl Gurney gave his top-four hopes a massive boost by stunning Michael van Gerwen 8-5 last week and now sits just point from the top four with two weeks remaining. This week Superchin faces Gerwyn Price, who has only one point less himself. Now more of an outsider, The Iceman is running out of time and now needs to begin winning in order to make up those points. Given that he has won nine of their past eleven meetings, the Welshman has a slim chance to do so in what is comfortably the hardest match of the night to call.

After losing last week, Michael van Gerwen is now chasing top spot, and given how Rob Cross fares in match 2, he has every chance to catch up after he surely beats Peter Wright, whose campaign never really got going this year. While MVG’s winless streak stretches to two, Snakebite is in freefall after nine games without a victory and a straightforward win for the Dutchman is expected.

Your weekly accumulator with Betway is as follows; James Wade, Rob Cross, Gerwyn Price and Michael van Gerwen which pays 11.91/1.