Gerwyn Price And Daryl Gurney Tie Before Coming To Blows 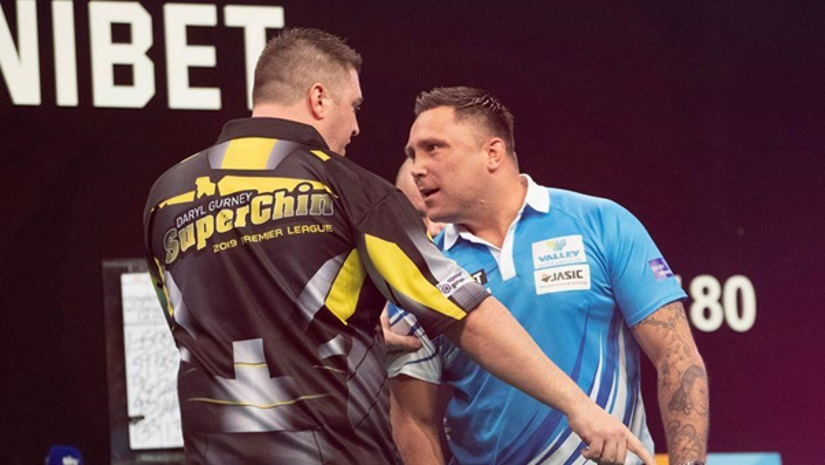 Following a stormy 7-7 draw, Daryl Gurney and Gerwyn Price had to be held back on the oche in Sheffield on Thursday night. Security was required to step in and separate the pair after Price and Gurney scuffled following some perceived over the top celebrations and what Price believes to be other players trying to get him banned.

Both players are still in the hunt to qualify for the end-of-season play-offs, with The Iceman looking for long periods that likely take the spoils. That was before the Welshman let a 6-3 lead slip to open the door for Superchin to level the game at 6-6. Price rediscovered some form in the nick of time, securing a double-double finish and clinching a point. Gurney then took the final leg of the match to earn himself a point also, but then erupted into a Price-esque, shouty celebration.

This then led to an argument with the players blowing up and exchanging heated words. It was another charge on Price’s rap sheet after he refused to shake James Wade’s hand last Thursday along with a row with Gary Anderson when winning the Grand Slam of Darts that also resulted in a three-month suspended sentence, which is still hanging over the Welshman.

Rob Cross is now guaranteed a Premier League Darts play-off spot after posting a decent 8-4 victory over Mensur Suljovic that also keeps him top of the table for at least another week. All Voltage requires now is to beat James Wade in Leeds this week and he will become only the third player in the 15-year history of the tournament to finish the league stage on top two years in a row. The others, as I’m sure you know, are Phil Taylor and Michael van Gerwen.

It is exactly what Voltage deserves in what is only his second Premier League campaign and one in which he has performed magnificently. This latest win saw him post his 10th 100+ average of the Premier League season, one aided significantly by hitting four 180s in the opening three legs on his way to a 4-0 lead.

Suljovic is also a play-off hopeful, fighting hard to stay in the contest for as long as he could by managing to half the deficit to 4-2 before Cross produced a 126 checkout on the bull. Voltage then took the next for good measure to bring the score to 6-2 before the pair distributed the next two legs equally. The Austrian had one last leg in him before Cross sealed victory with a 15-darter that included back-to-back 180s.

As expected, Michael van Gerwen is keeping the pressure on Cross and remains only the one point behind after his much expected and brutal 8-1 win over Peter Wright. Mighty Mike is looking to top the table for a seventh successive season but is fast running out of time with only the week left before London. The Dutch world number one is looking to win the competition for the fourth year in a row and, although still not top, this battering of Snakebite certainly increases his chances of making it to the O2 going into next week’s final round of fixtures. He even managed to bank an impressive average of 110.85 despite not landing a single 180 in the match.

MVG got off to a great start, opening up with an 11-darter plus two back-to-back ton-plus checkouts to go 3-0 up, before Wright scored his only leg of the contest after banking an 81 checkout. Snakebite, who averaged 102.29 and pinned four 180s only got to shoot for a double three times as Mighty Mike ran off with the match thereafter.

In the night’s opener, James Wade narrowly missed out on securing his place in London after dropping the last two legs in his match against Michael Smith, which ended in a 7-7 tie. The Machine went into the match third in the table and a victory looked a sure thing after a superb 161 checkout on the bullseye put him 7-5 up. From there Wade slipped up, failing to make it to a finish in either of the following two legs, leaving Bully Boy free to step in and salvage a point.

It’s over to Leeds for the final week and where the first match sees Gerwyn Price take on Peter Wright. The Iceman is sitting one point outside the top four and needs to beat Snakebite while hoping results elsewhere go his way if he is to qualify for the O2. The Welshman picked up a point last week in a bad-tempered draw with Daryl Gurney but should fare better this week against Wright, who is without a win in 10 matches. Snakebite has won 12 of his 16 meetings with Price, but it’s The Iceman who has won their last two and who has something left to fight for making him the firm favourite in match one.

Following the draw with Price, Gurney is level on points with fourth-placed Suljovic and this week faces Michael Smith, who drew with James Wade last time out leaving him winless in seven. Superchin beat the Bully Boy earlier in the campaign and, needing a win to progress, can be backed to do so again.

A result for Gurney is likely to put the squeeze on Mensur Suljovic who, after a strong campaign, could miss out unless he overcomes the challenge of Michael van Gerwen. It’s a shame for The Gentle that his two final games in the competition have been against the league’s top two. Having lost last week to Rob Cross — and with a record of only four wins in 16 games against MVG — Suljovic will be relying on results going his way to qualify for London. Given that Gerwyn Price faces Peter Wright, is thoroughly unlikely.

It is also unfortunate for James Wade that his ultimate match will take place against the other of the top two, Rob Cross. While perhaps not as daunting as MVG, this is still a tough match to overcome, although realistically he only needs one more point to reach the play-offs. Of their 11 meetings, Wade has won five and Cross six, so a close game is to be expected. Given Cross’ form right now and playing to secure top spot, it should be a Voltage win.