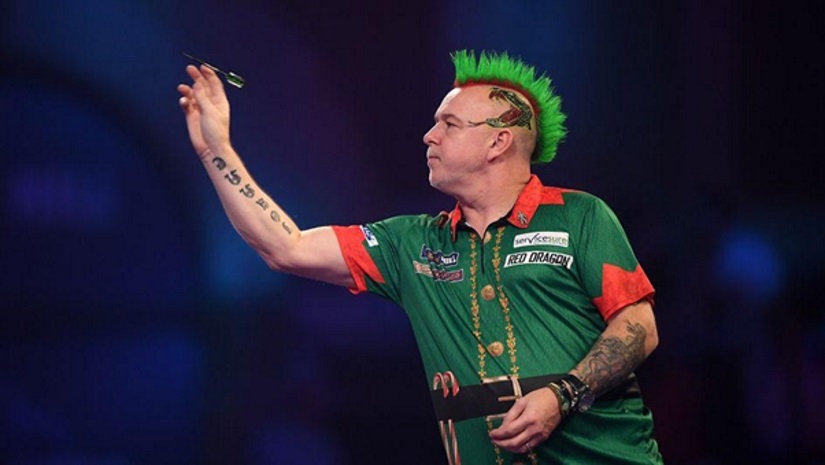 In a stunning opening week to the 2020 PDC Darts World Championships, we have said goodbye to Barney forever, crowned our first-ever female match-winner, seen Rob Cross and Michael Smith fall at the first hurdle and Gerwyn Price and Peter Wright survive by the skin of their teeth. Safe to say, it’s been emotional.

Yes, the tournament has been bust wide open by two of the top five being eliminated early on and Thursday that number nearly became three when number two seed Gerwyn Price survived thanks to some dodgy maths from his opponent William O’Connor in the deciding set.

The favourite from the bottom half of the draw, and the man hotly tipped to meet Michael van Gerwen in the final on New Year’s Day, found himself down 2 to 1 sets in a first to three match and playing well below standard when he was left facing match darts from his Irish opponent. The Iceman was required to win a deciding leg to force the fifth set where he again found himself down 2-1. A hold of throw forced the issue into a tie-break where O’Connor’s numbers let him down.

Miscounting the twos he required, O’Connor instead took aim at two ones which let Price back in, a miraculous reprieve he didn’t really deserve. Nevertheless, the Welshman didn’t turn the opportunity down and broke throw from 75 before sending the Irishman packing with a clinical 13-darter. Also on Thursday, Dave Chisnall defeated Vincent van der Voort 3-1 to move into the next round.

Friday saw much of the same from a festive Peter Wright who was required to play a sudden-death leg against Pilipino star Noel Malicdem. After five wild sets, week one drew to a dramatic close as the great entertainer, Snakebite — dressed as an elf — looked to be another big name heading for an early exit. In the deciding match, Wright found himself 2-1 behind and chasing a close of 302, while Malicdem required only 121. Malicdem then missed his match dart and Snakey stole the leg in dramatic fashion, checking out flawlessly.

The match was typical Peter Wright and it went to a sudden-death game with closest to the bull throwing first. Snakebite found the bull perfectly, then opened up the leg with a 180, a 140 before hitting the one twice, just to worry his fanbase who were now in full voice. The Scotsman then pinned double 16 for a 13-darter. Brilliance and madness in one crazy package as Wright, who fell at the first last year, moves on to the next round.

The first woman win at the PDC World Championshio 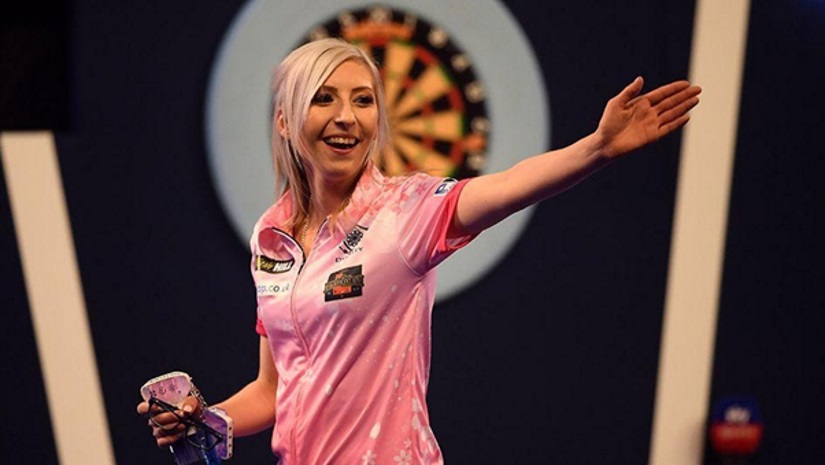 History was made at the Ally Pally this week as Fallon Sherrock became the first woman to win a match at the PDC World Championship, making the global news agenda in the process, even receiving a congratulatory tweet from American tennis legend Billie Jean King.

Beating Ted Evetts 3-2, the 25-year-old Sherrock won £15,000 for that one match, £3,000 more than she picked for winning the BDO World Championships Ladies event outright, while she spent the following morning she met Piers Morgan on a visit to the Good Morning Britain studios, so it wasn’t all good news. At least she got to beat him in a three-dart challenge.

Earlier in the week, Japanese star Mikuru Suzuki, the other competing lady, narrowly missed out on beating Sherrock to it when she just lost 3-2 to James Richardson. On Sunday, the Ally Pally crowd had cheered enthusiastically for Suzuki. Sherrock was treated to much of the same as 2,000-strong crowd rooting for the Milton Keynes star.

Sherrock will now go on and meet Mensur Suljovic this Saturday evening in the second round. As a further reward for her efforts, Sherrock has been confirmed to appear at the 2020 US Darts Masters next June, which has moved from Las Vegas to Madison Square Garden in New York for the first time.

Saturday and the rest of the week

On Saturday, night two of this year’s tourney, the 2018 champion Rob Cross caved to a pathetic 3-0 defeat to Kim Huybrechts. The reigning World Matchplay and European Championship winner and world number two saved his worst performance for the biggest stage of all, managing to land just two legs and even busting from 130 in the third set. A flatlining Voltage averaged a mere 89.64 while he also spurned 11 of his 13 darts at doubles.

A few nights later, Michael ‘Bully Boy’ Smith joined Rob Cross, and Ian White for that matter, on the eliminated list. Smith was shot down by rising star Luke Woodhouse for whom this victory represented the biggest scalp of his career, even accounting for the Players Championship Finals win over Daryl Gurney. Woodhouse averaged 97.81 and hit five maximums, while Bully Boy’s average of 95.69 was well below his usual high standards.

No such concerns showed themselves for world number one Michael van Gerwen. MVG powered through to the third round despite a poor start to the match. The three-time world champion was paired against fellow Dutchman Jelle Klaasen and it was actually Klaasen that took the first set after fighting back from 2-0 down before finding himself 2-1 up in the second set. Mighty Mike then roared into action to take over the match and eventually send his countryman packing with a 3-1 victory.

Gary Anderson will also play in the third round after he cruised through his opener against Brendan Dolan 3-0. The Flying Scotsman showed glimpses of his best as he took the first five legs unchallenged by his opponent leaving many forecasting a whitewash. Dolan quickly pinched a leg but it really didn’t interrupt Anderson’s momentum as he saw out the rest of the match with ease.

For those watching Anderson’s progress, and there will be many after this performance, his route to the semi-final has been made all the easier after the elimination of Michael Smith from his side of the draw.

Raymong van Barneveld bows out for the last time 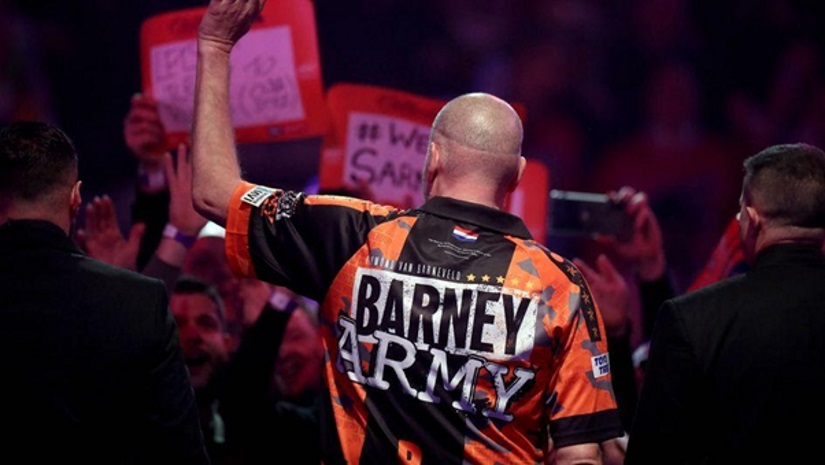 The first week also brought us some sadness too as people’s champion Raymond van Barneveld lost his opening match and now says goodbye to the Ally Pally forever. Darin Young was the man who bought an end to one of the most distinguished darts careers ever with a 3-1 win. The five-time world champion and his millions of Barney Army fans around the world were willing him on to enjoy one last deep run on the biggest stage of all but it wasn’t to be.

In one of the saddest, albeit emotional, post-match interviews ever Barney reflected; “I lost the first round, in my disaster year. I will never forgive myself, never ever. It has been a nightmare end to a nightmare year. The demons won again, I never felt comfortable in the whole match. I’m a loser. Every day is a disappointment in my life. Proud of what? That’s all in the past, I can’t live with myself for this. Never ever. It [legacy] doesn’t matter. I don’t belong at this high level anymore and that’s what I’ve got to tell myself for the rest of my life.” Chin up, Barney and farewell.

A first week in which the big names have taken a hit has had a dramatic effect on the outright betting market. While MVG moves backwards to evens, Gerwyn Price is now valued at 9/2. Gary Anderson’s route to the final has opened up thanks to Michael Smith’s elimination. Naturally, this has brought his price in at Betway to 12/1. The same price is offered on Peter Wright, while Dave Chisnall is now rated at 16/1. Glen Durrant is 33/1 as is James Wade, and Daryl Gurney 40/1, all with Betway.