World Grand Prix Of Darts Off To A Flyer 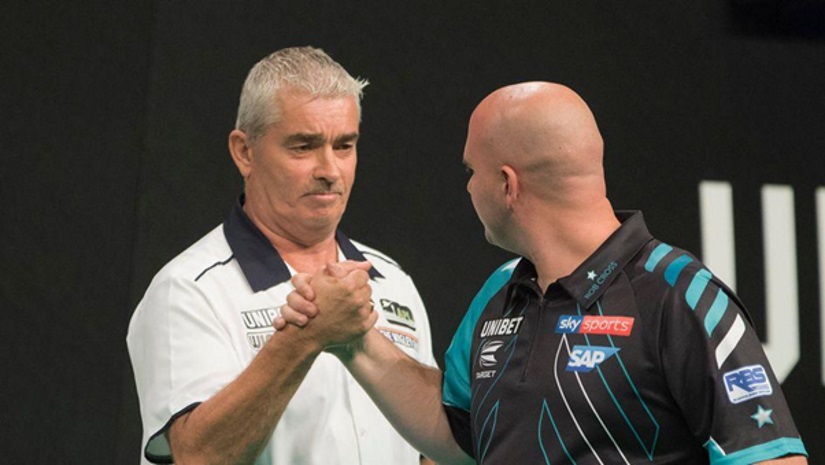 Wednesday sees the World Grand Prix quarterfinals get underway in Dublin, and what a week it’s been so far.

In Monday’s first round, world champion Rob Cross received his marching orders from Steve Beaton, who caused the shock of the World Grand Prix as ran out the 2-0 winner. On the same night, James Wade, Simon Whitlock and Michael Smith all exited the tourney. In their place, Mensur Suljovic, James Wilson and Adrian Lewis all progressed.

On Tuesday, we saw Raymond van Barneveld eliminated at the hands of a rejuvenated Dave ‘Chizzy’ Chisnall who ran out a 3-0 winner. This surprising defeat opens up the draw for field including our pick Gary Anderson, who won 3-0 at the expense of Jeffrey de Zwaan. This was followed by Daryl Gurney beating Ron Meulenkamp 3-2, before Mighty Michael van Gerwen won 3-0 against Darren Webster.

First up tonight is Mensur Suljovic versus Ian White, and despite the latter’s European Tour win in Maastricht recently, I really can’t see him getting the better of Mensur in Dublin. This match is followed by Steve Beaton versus Gerwyn Price in a game that’s very tough to call. Is this the end of Beaton’s good run of form or can he go one match more? The romantic in me hopes that his form continues, so I’ll be backing him at 6/4 with Betway.

Peter Wright takes on Jermaine Wattimena next with the smart money surely being stacked on Snakebite, before James Wilson and Adrian Lewis go head to head. I have to side with Jackpot here as the outright winner price on Lewis offered by Betway — 18/1 — is just too good to turn down.

Looking at the form book, Peter Wright is the one of the most likely players to make a challenge to the Big Two, MVG and Gary ‘The Flying Scotsman’ Anderson. Wright still has to navigate a tricky game against Jermaine Wattimena tonight, but assuming he does so, he stands a very good chance of upsetting the odds over his countryman. The Scotsman performed superbly at the Champions League of Darts last weekend, beating Michael van Gerwen in the semi-finals before losing to Anderson in the final. For the outright win, Peter Wright is worth 11/2 at Betway, while the same online bookmakers have priced Gary Anderson at 7/2.

As usual, Michael van Gerwen is the favourite at evens which won’t have changed after his two flawless victories so far in Dublin. For the superstitious supporters, he won this event in 2012, 2014 and 2016, so could the sequence continue in 2018? More than likely.

We can’t mention the potential winners without talking quickly about Mensur Suljovic. Priced at 10/1 with Betway, The Gentle is coming into the Grand Prix as one of the hottest contenders around and a run for the title in Dublin this week — after making the semi-finals last year — is certainly foreseeable.