In the seventh night of the Darts Premier League, world number one Michael van Gerwen smashed the record for unbeaten televised matches with 44 unanswered games only to lose his 45th to countryman Raymond van Barneveld less than two hours later. 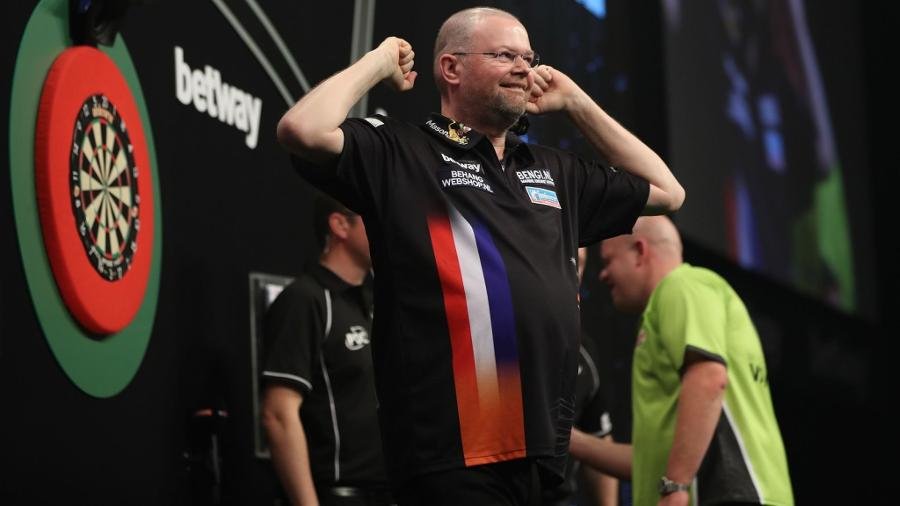 The record, previously held by Phil ‘The Power’ Taylor, was beaten courtesy of a 7-4 victory over James Wade in the night’s opener. The dangerous Dutchman landed eight 180s and closed out in style with a 120 checkout.

The fall of Michael van Gerwen

Mighty Mike was forced to play a double header after forfeiting Exeter’s round five with a back injury and so turned out again later for the night’s closing game against Barney. A second game of the night proved one step too far against an inspired van Barneveld who ran out the 7-5 winner.

Taylor, in inspired form, led throughout as Snakebite consistently missed the doubles, only to stage a brilliant fightback from 6-3 down (including an electric 156 checkout) to make sure the match went all the way down to the wire.

At this point, it looked like those of us who backed the draw would get rewarded until the temperamental Snakebite again failed to finish, allowing The Power to take full advantage and claim a well-earned 7-5 victory.

We were spared the drama of Judgement Night as the relegations of both Kim Huybrechts and Jelle Klaasen were confirmed following defeats to Gary Anderson and Adrian Lewis respectively.

Huybrechts went down with a whimper as a brutal Anderson won 7-2; Klaasen barely did any better as Adrian ‘Jackpot’ Lewis ensured the Dutchman’s elimination by way of a 7-5 victory.

All this means that Barney now moves on to third in the table while MVG replaces Peter Wright at the top.

So, we move on to Cardiff’s Motorpoint Arena for what should have been Judgement Night. However, we know the two players to have missed the cut.

It was always likely be Jelle Klaasen and Kim Huybrechts, although Dave ‘Chizzy’ Chisnall did seem to flirt with the idea for a while. The question now will be whether the eliminated duo, playing only for pride, can raise their game on the way out the door.

In Huybrechts’ case, I cannot see it. He takes on Peter Wright in the night’s opener and I fully expect Snakebite, loser last week, to return to winning ways here. That being said, Snakebite does drop shots with a stunning regularity for such a top player.

Looking for value in the market isn’t easy this week but the Belgian to be the first to break throw isn’t out of the question and well worth considering given the 11/10 price on offer with Bet365, especially if Snakebite starts as slowly and as poorly as he did a week ago.

The second game of the evening presents a different challenge altogether. Other than Barney, there are few players tougher to read than The Power these days as the ageing pair rarely play well two weeks in a row. That said, even on an off day it would be madness to back against Taylor against such opposition.

I think that despite the Dutchman’s brilliant form over the last couple of weeks, including his brilliant win against MVG, Wade might very well just put a stop to the run here. It is probably smarter to leave this one off the accumulator, but there really is no fun in that, so Wade it is.

The best of the rest

Elsewhere, Adrian Lewis, a shadow of his former self despite a win last week, should be no match for Gary Anderson. League leader Michael van Gerwen should definitely come out on top against Dave Chisnall in the night’s closer.

This week’s, accumulator is Wade, Taylor, Anderson, MVG and Wright.

This comes in at a pay-out rate of 11/1 with event sponsors Betway.

Wright, by the way, has drifted out in the overall market following last week’s defeat – his first in the competition.

SkyBet are offering 11/2 on the Scotsman who, although dropping down the table to second last week, remains only a point off MVG at the top.