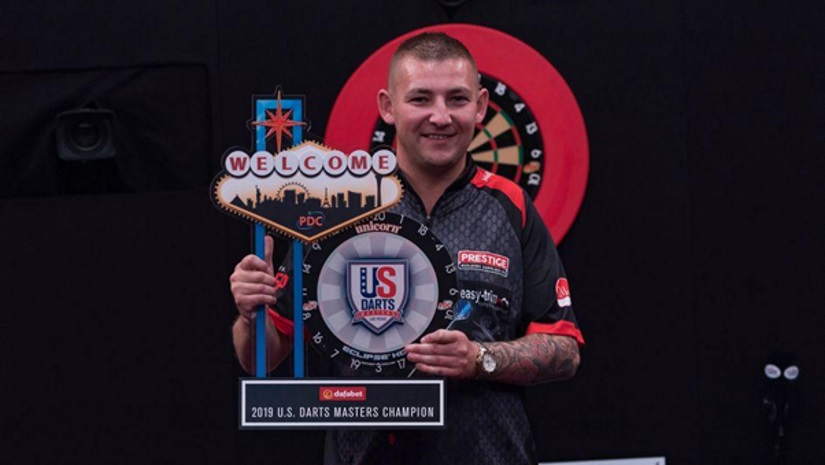 UK Open champion Nathan Aspinall last week collected his second PDC title when he took down the US Darts Masters in Las Vegas by beating the Bully Boy Michael Smith 8-4 in Friday’s final. 27-year-old Aspinall from Stockport was making his World Series debut and saved the occasion to produce a personal best TV average of 106.7. He also managed to land five 180s, while successfully pinning 8 of his 11 darts at doubles.

Aspinall, nicknamed The Asp, couldn’t have hoped for a better start, as he opened with a 10-darter before banking two 180’s on each of his first two visits in the follow-up. Even a bounce out couldn’t stop him as he landed 15 perfect darts in a row. Not to be outdone in front of the Vegas crowds, Smith went on to throw a maximum of his own before checking out for 130 in the next to level the match at 2-2.

Things settled down thereafter with the next three legs going with throw until The Asp moved ahead, winning four legs on the bounce and with them, the second televised title of his career.

It could all have been so different. Earlier on in the day, Aspinall needed to survive a match dart against Peter Wright in the semi-final before winning 8-7 to send Snakebite packing. While Bully Boy started the day with a sweet victory over Michael van Gerwen before steamrolling Gerwyn Price, who had earlier eliminated his old enemy Gary Anderson, to reach the US Darts Masters final.

According to Betway Michael van Gerwen is the most likely to win the competition outright as he has been given the favourite’s short price of 11/10. He is followed in the betting by Gary Anderson, who can be picked up for 5/1. For those fancying Rob Cross to land another tourney, they can get 13/2 on Voltage.

James Wade and Peter Wright are both available for 10/1, while Daryl Gurney is 14’s. Mensur Suljovic is looking to defend the title he won last year in Gelsenkirchen and has a 16/1 price on his head. Of the Local heroes, Max Hopp is the shortest of the set at 50/1, the same price as the last of the PDC eight Raymond van Barneveld. And while a win for Barney is always welcomed, our money this week is going on Gary Anderson at 5’s as he looks to make up for lost time having missed so much of 2019 so far.

Whoop, whoop, the summer’s biggest darts event is not too far away now so it’s timely then that PDC have released the schedule for this year’s World Matchplay Darts, which takes place at the Winter Gardens in Blackpool from July 20 to July 28.

Famously one of the pros’ favourite events, the World Matchplay features 32 players all competing for the Phil Taylor Trophy live on Sky Sports. Round one takes place over three days, including two Sunday sessions. The second round is split across Tuesday and Wednesday, before the quarter-finals are held on Thursday and Friday, with the semi-finals on Saturday before Sunday’s final.

Each game must be won by two clear legs, with up to a maximum of five additional legs being played before a sixth sudden-death leg.

Early prices are available at Betway but we can quickly summarise here; Michael van Gerwen will be favourite, with Rob Cross, Gary Anderson, Michael Smith, Peter Wright and the reigning champion Gary Anderson all following on.

The draw sees Gary Anderson open up against Danny Noppert while newly crowned US Darts Masters champ Nathan Aspinall will play Mervyn King on the same night. Other Saturday clashes include Gerwyn Price versus Stephen Bunting and Rob Cross versus Chris Dobey. 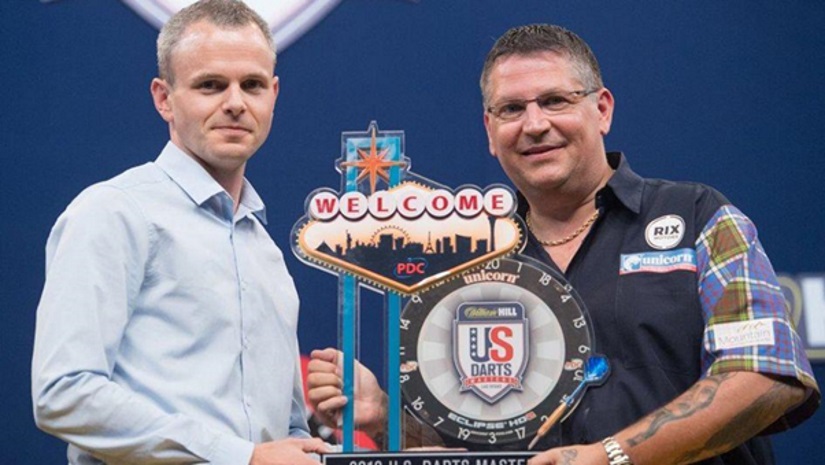 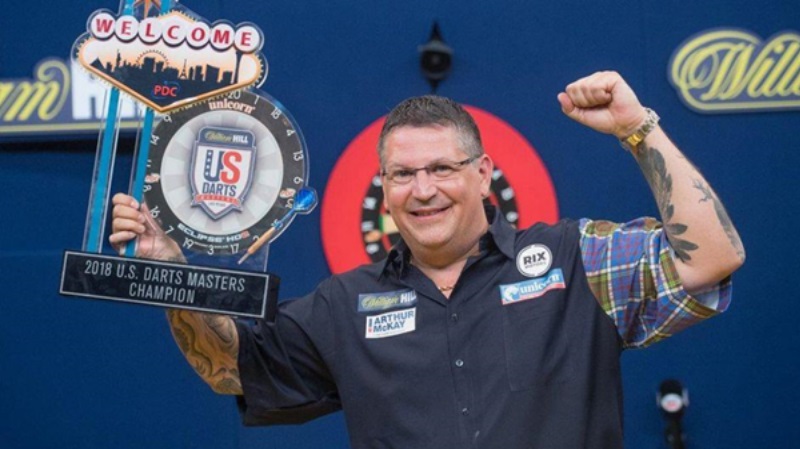 The Flying Scotsman, Gary Anderson, returned to his winning ways this past weekend after winning his sixth World Series of Darts crown in the US Darts Masters final against Rob Cross. Taking place on Saturday at the Mandalay Bay Casino & Resort in Las Vegas, the World number two produced a superb comeback to win 8-4 win over Cross.

Anderson’s road to the title

Anderson, a two-time world champion, showcased his undoubted class with a series of determined performances as he took the title, his first ever win in Vegas. The performance came as he cast aside DJ Sayre easily before moving on to the Canadian youngster Dawson Murschell, who he vanquished in a 8-5 quarter-final win, despite trailing 3-2 early on.

He came up against James ‘The Machine’ Wade — who had earlier beat Michael van Gerwen 8-3 — in the semi-finals in a match that went all the way to a deciding leg despite Wade leading 6-2 at one point. Anderson hit back to level before edging 7-6 ahead only to miss double ten for a 140 checkout and with it, the win. He didn’t need to wait long, which followed shortly after he bagged a 75 to nick the win and move into the final.

Once in the final, World champion Rob ‘Voltage’ Cross soon laid claim to a 3-0 lead, which turned into 4-1. Anderson, however, jumped on the opportunities Cross’ missed doubles presented him, and in a run of seven legs, he leveled and overtook his rival before storming to victory, with a stunning 164 checkout.

Cross’ route to the final was also a tricky one, meeting both Michael Smith and Peter Wright on Saturday’s final day. Smith was dismissed for 8-6, with the pair each landing seven maximums, while Peter Wright was shot down 8-3 in the semi-finals.

The eight PDC stars all now relocate to China ahead of the next World Series of Darts event, the Shanghai Darts Masters, on July 13-14. At the time of writing, no prices have been updated in the sportsbook of the online bookmakers Betway.

The full draw for the biggest darts event of the summer has been made. The 2018 World Matchplay takes place at the Winter Gardens in Blackpool from July 21-29.

Last year Phil Taylor marked his final appearance on his declared favourite stage with a 16th World Matchplay title, beating Michael van Gerwen in the process. This year, MVG is the favourite to overcome the 32-player field and claim the now-renamed Phil Taylor Trophy.

That said, the likes of Rob Cross, Gary Anderson, Peter Wright and Michael Smith will all have something to say about that. Below we have listed the first round, with the 16 seeded players paired with the 16 qualifiers from the one-year ProTour Order of Merit.