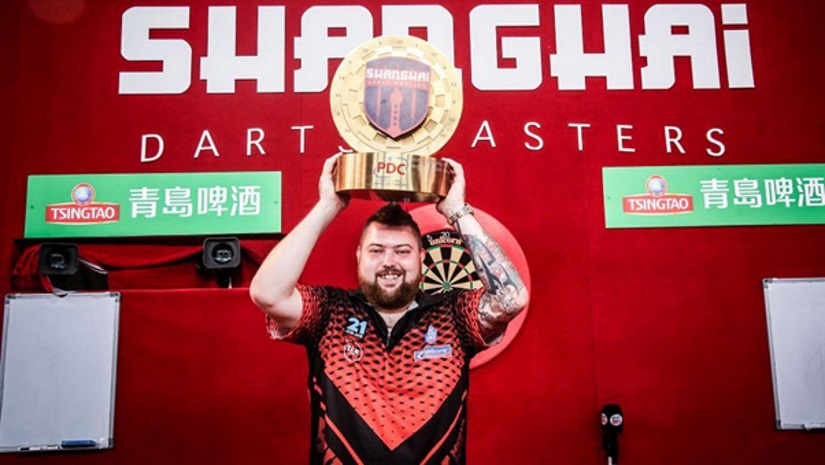 Michael Smith saw off final day competition from both Michael van Gerwen and Rob Cross to win the Shanghai Darts Masters and claim his first ever World Series of Darts title last weekend. Bully Boy seized upon an uncharacteristically dodgy performance from the Dutch world number one to bank an 8-4 victory in the semi-finals. The victory was preceded by a 8-5 quarter-final win over Royden Lam, who had himself sent Gary Anderson packing.

It was his showing in the main event against World Champion Rob ‘Voltage’ Cross where he really shined, beating Cross 8-2. Smith started the match off strongly and before long, his good start had been rewarded with a 4-0 lead over his opponent, who was appearing in his second final in seven days. Cross lost in the US Masters final in Las Vegas a week prior.

Cross closed the gap to within two legs after saving a break of throw, but Smith quickly re-established the gulf by landing a stunning 130 finish, before he nabbed the final two legs to seal the win. Bully Boy now heads to the World Matchplay high on confidence, as he looks to take down his first major darts event.

This weekend, the world of darts gets really get rolling as the sport’s second biggest event, the World Matchplay, gets underway at The Winter Gardens in Blackpool. This event is second only in stature to the World Championship and last year, Phil ‘The Power’ Taylor won his last ever major televised tournament here. He almost followed his Blackpool victory with the World Championships but narrowly lost in the final that would have given him a fairy tale send-off from the game. The reigning champion is enjoying his retirement now and so obviously will not be in Blackpool to defend his crown, but he will be working for broadcasters Sky Sports in the commentary booth.

Matchplay favours consistency above all else, allowing for far more drop shots than can be afforded in, say, the World Championships. Played without sets and purely for leg play, Matchplay is more than any other tourney about applying pressure on your opponent.

It goes without saying that Michael Van Gerwen is the short priced, odds-on favourite, at 8/11 with Betway. Mighty Mike has, after all, contested three of the last four finals here, winning two of them. Once you factor in that the only player to beat him here in the last four years was the absent Phil Taylor, it doesn’t take long to see the reasoning behind his short price.

Elsewhere, Rob Cross will fancy his side of the draw and is a reasonable 7/1 as the third seed. Most pleasingly for Voltage, he avoids Gary ‘The flying Scotsman’ Anderson, who he always struggles to beat. On his side of the draw, however, he is scheduled to come against the familiar faces of James Wade (28/1), Mensur Suljovic and the second seed Peter ‘Snakebite’ Wright, who is available at 9/1 with Betway.

Further down the line up, Mensur Suljovic catches the eye, largely due to the format itself. I’m still not recommending you go against MVG, but keep an eye on The Big Gentle as the week progresses. Mensur, who opens against Steve Beaton, is both the current Champions League of Darts winner and a World Series event winner, which are also leg format events, after all. He is also a decent 25/1 for an outright win here for the bravest of you. For the almost brave, Betway are offering 11/10 for any new winner, which is not bad looking at the field.

The first round is divided over the opening three days, which includes a double session on Sunday and a mouth-watering opening night that will be headlined by the all-Dutch clash between Michael van Gerwen and Jeffrey de Zwaan. One-time finalist Adrian Lewis faces James Wilson in his opening fixture, while Dave Chisnall takes on Keegan Brown. 2018 Premier League finalist and newly crowned Shanghai Masters winner Michael Smith, who can be backed at 28/1, plays Jonny Clayton.

From there, the second round is split across Tuesday and Wednesday, the quarter-finals over Thursday and Friday, with the semi-finals on Saturday before the final on Sunday.

Second Round (Best of 21 legs)