Another week, another title for Michael Van Gerwen as his impressive 2016 form continued with yet another tournament win, this time in the World Series. Yep, last Sunday at Glasgow’s Braehead Arena, the Dutch master took down his 23rd tournament victory of the year as he retained the World Series of Darts. 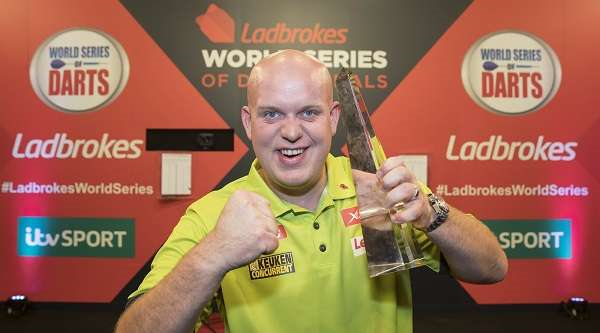 MVG took on Peter ‘Snakebite’ Wright in a repeat of the 2015 final where the Dutchman won 11-10, this time winning 11-9 and claiming the £30,000 first prize. It was a tight affair, however, as Wright, who had defeated Phil ‘The Power’ Taylor in the previous rounds, saved his best for his home crowd, taking an early 4-3 advantage. The lead didn’t last long though, as Van Gerwen claimed seven out of the next nine legs, putting himself 10-8 ahead.

Surprisingly, MVG then stuttered and allowed Wright to get back into a match which had already seen the lead change hands three times. While Wright brought himself level for what would have been his first ever championship title, Mighty Mike dug deep, like the best champions always do, and closed out the match with his ninth 180 before sealing the win on a magnificent double two.

For the Dutch master, this meant his third successive televised title following back to back wins in the World Grand Prix and European Championship. He will be looking to add a fourth this weekend when the Grand Slam of Darts rolls into the Wolverhampton Civic Hall.

Running for nine days from November 12 until November 20, the Grand Slam of Darts is a unique event that recruits 32 players from both the PDC and the BDO. The PDC players qualify through their annual performance in televised events which has led to the inclusion of the following ten stars; Michael Van Gerwen, Phil Taylor, Gary Anderson, Adrian Lewis, Peter Wright, Dave Chisnall, Raymond Van Barneveld, Mensur Suljovic, Max Hopp and Nathan Aspinall.

The opening four days splits the players up into eight groups for a round-robin style opening round where players will score two points for a win and the top two from each group will progress to the knockout stage from the last 16 onwards.

The full draw, groups and schedule have now been drawn up so we can begin to take a look at where the value lies.

It goes without saying that Michael Van Gerwen is the favourite, at 5/6, to defend his Grand Slam of Darts title so let’s leave this one there. Six-time Grand Slam winner Phil Taylor is a tempting 6/1 with Betway while my pick, Gary Anderson, is 7/1 with the same bookmaker.

For the opening day, SkyBet are running an enhanced accumulator on Saturday big shots Phil Taylor, Gary Anderson, Michael Van Gerwen & Adrian Lewis all to win for 11/8. Or, there is the following sweetener based on the afternoon session: James Wade, Peter Wright, Mensur Suljovic, Raymond Van Barneveld & Dave Chisnall all to win at 100/30. Providing you can choose between Suljovic and Van Barneveld, both evens, simply picking the group winners from the favourites will pay around £78 a line at Betway .

With MVG in this kind of form, it really is worth looking at each way bets. We proved this last week when we plumped for Peter Wright at 25/1, who paid out at half the odds for a second place finish. Bear this in mind with Adrian Lewis available at a 22/1 with Bet365 and Peter Wright at 20/1 across the rooms.

Oh, and from the BDO camp, Glen Durrant at 50/1 is the shortest price and can be taken at SkyBet, Bet365 and Betway should you feel an upset is on the cards.

*Order of play still to be confirmed