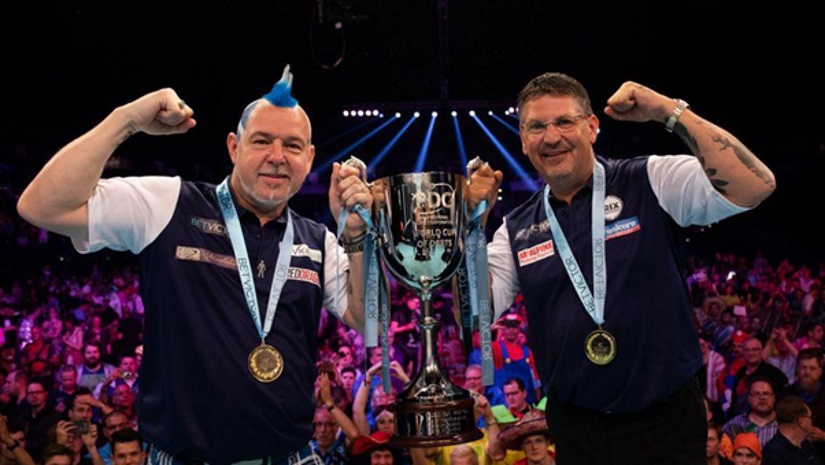 The World Cup of Darts has a new champion after Scotland won the competition for the first time in their history on Sunday night in Hamburg. In a surprise final line up, Peter ‘Snakebite’ Wright and Gary ‘The Flying Scotsman’ Anderson saw off Republic of Ireland’s Steve Lennon and William O’Connor with a 3-1 victory in the final.

The Scottish pair had made the final twice previously, losing on both occasions to England in 2015 and Holland a year ago. In its history, only England and The Netherlands have ever won the World Cup, although it was Ireland that put an end to English-Dutch dominance this year.

On Saturday, Lennon and O’Connor, who were 66/1 at the start of the tournament, shot down the pre-tournament favourites, England’s Rob Cross and Michael Smith in the second round, before taking out Holland’s Michael van Gerwen and Jermaine Wattimena in the semis. Ireland also dumped Mensur Suljovic’s Austria out in Sunday’s quarter-finals.

The Irish pair almost caused an upset in the final too as Lennon won his singles game 4-2 over Gary Anderson. But, in the second matchup between the two pairs, Wright’s average of 96.73 was enough to level the tie as he saw off O’Connor by the same score line.
Scotland then moved 2-1 ahead after thrashing the Irish 4-0 in the doubles before the reverse doubles saw Snakebite defeat Lennon 4-1 meaning Gary Anderson wasn’t required to return to the oche. Scotland had established an unassailable 3-1 lead which put an end to Ireland’s hopes and meant that Scotland would be crowned World Cup winners for the first time.

With the players on a mini-break for a few weeks until they meet in Las Vegas, now is a good time to look ahead to what is coming up over the second half of the year for the PDC. The World Matchplay, second in importance only to the World Championships, is the next big event on the horizon and takes place, as always, at Winter Gardens in Blackpool on July 20.

As you would expect, Mighty Mike van Gerwen has already been installed as favourite by online bookmakers Betway, who rate him as evens. Rob Cross has been priced at 7/1, while Gary Anderson — returning to events and newly crowned World Cup winner — has a value of 9/1.

From here, interestingly, the prices begin to widen. 16/1 on James Wade must tempt some, as will the 22/1 offered on Gerwyn Price and Michael Smith. Time will tell how this weekend’s success will affect Peter Wright, but if he reacts positively, he could well have a very strong second half of the season. Given his appalling 2019 so far, World Cup notwithstanding, prices are longer than previously and true to form, he has a 22/1 price on his mohawked head which might be worth a punt before it drifts in as it so surely will.

Further down the line, Daryl Gurney is 25/1, Mensur Suljovic is 28/1 and Adrian Lewis is 33/1, while you can also get 33/1 on Glen Durrant winning his maiden PDC event.