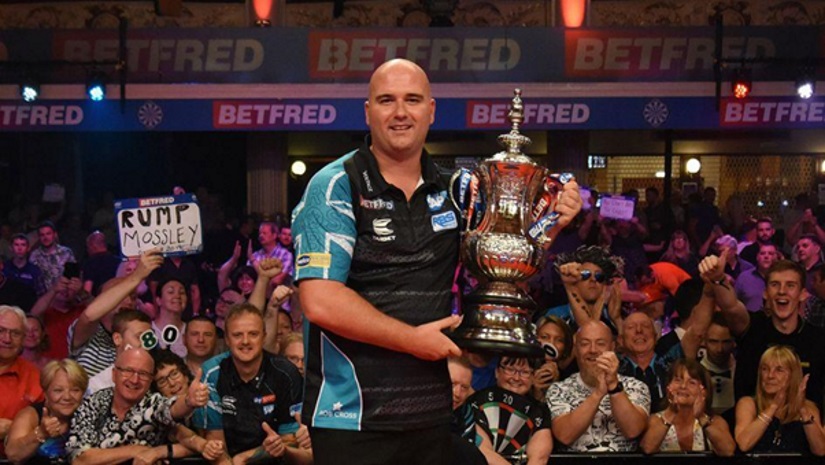 Rob ‘Voltage’ Cross picked up his second ever major title on Sunday when he beat Michael Smith 18-13 in the final of the World Matchplay Darts in Blackpool. The 2018 world champion has now landed the two biggest prizes in the sport, becoming only the ninth ever winner of the Matchplay and the fourth player to win both, despite having only turned professional three years ago.

The final was another low-quality affair with Smith starting poorly and allowing Voltage to race into a huge 9-0 lead, threatening Blackpool’s biggest ever final victory when in 2009 Phil Taylor destroyed Terry Jenkins 16-4.

A look back at Cross’s 2019 World Matchplay Darts win

While this wasn’t the fitting climax that what was otherwise an excellent week’s darts, the crowd were soon to be suitably entertained as another epic comeback was on the cards. When Bully Boy finally got his first leg on the board, he was greeted with a chorus of ironic cheers before clawing the match back to 11-4.

Bully Boy managed to stop Cross running away with an uncontested – if inevitable – victory by landing a 147 checkout plus legs of 12, 13 and 12 to follow. Following the break, Smith managed to land an 11-darter which reduced the deficit still further to 14-11. A brilliant save from Cross, checking out from 110 when Smith had only 16 left, in the next helped to nip Smith’s momentum though. Had Bully Boy got the chance to shot for the 16 and pin it, perhaps that would have been the pivotal point of the contest.

Still, Smith managed to close the gap on his own throw to within two legs, and finally enjoying themselves, the Winter Gardens crowd began cheering Voltage’s six missed doubles. Smith, though, also wasted five of his own before pinning tops for a 20-darter that brought the game to as close as it would ever get. From here, Cross closed out the match and the title by taking down the next three legs, albeit surviving multiple bullseye shots from Smith.

Cross had himself needed to stage a dramatic comeback only 24 hours earlier against Daryl Gurney when he found himself 13-7 down only to win 17-15. In turn, what had been a great week of darts also saw Gurney star in a quarter-final epic against Peter Wright in which Superchin came out on top in a 13-16 thriller.

In the other semi-final, 28-year-old Smith, who is still seeking his first major title, saw off the challenge of MVG slayer Glen Durrant 17-10. The Bully Boy keeps on coming close and the 2018 Premier League, 2018 World Series of Darts Finals and 2019 World Championship runner-up is now 14/1 to go one better and win the World Championship of Darts at the Ally Pally, which starts in December.

For Voltage, he is celebrating his first title of any kind since the Brisbane Darts Masters in August last year. Since then, he has finished second to Nathan Aspinall at the UK Open and again to Michael van Gerwen in the Darts Premier League, a win that would have seen him complete the Triple Crown of Darts if he had beaten the Dutchman. Naturally, Mighty Mike is in the elite group of players to have won the Triple Crown of Darts that also includes Phil ‘The Power’ Taylor and Gary ‘The Flying Scotsman’ Anderson.

For now though, he can enjoy being in the same esteemed company of those who have collected the top two trophies in darts. What’s more, is that he would be the second quickest to have achieved such a feat having taken only three seasons to do so. Phil Taylor, who Cross beat in the 2018 World championship final -– a match that was Taylor’s last professional appearance — managed to achieve both titles within two years but it took Michael van Gerwen eight and Gary Anderson ten.

A look at World Darts Championship

At Betway, they still consider Michael van Gerwen to be the favourite for the World Darts Championships at the end of the year, putting an 11/8 price on his head. Value has been lost on Rob Cross though as his recent win draws his price into a still pretty decent 15/2. Gary Anderson is 9/1 to pick up his third ever World Championship, while Peter Wright is worth 12/1. Current BDO World Champion, Glen Durrant is available at 16/1, Nathan Aspinall 25/1 and Gerwyn Price 28/1. James Wade can be picked up for the same price, while Daryl Gurney is 33/1. Others, including 65-year-old Singapore star Paul Lim, who qualified through a PDC Asian Tour event over the weekend, are available at Betway.