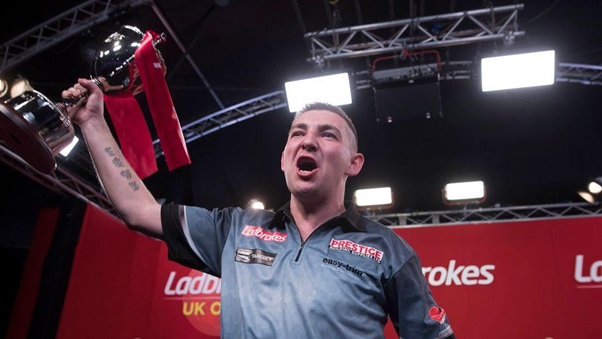 Stockport’s Nathan Aspinall claimed his first ever major PDC title on Sunday when he beat Rob Cross in the final of the UK Open at Butlins Minehead Resort. It was a weekend of surprises which saw early eliminations for Peter Wright, Gary Anderson, and most surprisingly of all, Michael van Gerwen, who only one night earlier suffered his first Premier League defeat of the season.

A shock at the UK Open

The Asp, who saw off Gerwyn Price in a tough semi-final, got his hands on his maiden major trophy to cap a remarkable few months in which he also won his first Players Championship title in September before reaching the World Championship semi-finals in December in his debut campaign. He has also tasted success on the Pro Tour this season when he beat Michael van Gerwen 6-1 in the Players Championship Four.

In the final, the first four legs went with throw and from 2-2, Aspinall reeled off three successive legs before letting Voltage back into the contest with some sloppy finishes. The former world champion closed the gap to 6-5, but it wasn’t to be as Aspinall won the next five legs in succession before closing in spectacular fashion with a 170 checkout.

Along the way, Aspinall, who came into the tournament ranked 34th on the Order of Merit, defeated Toni Alcinas, Christian Kist, Madars Razma, Steve Lennon and Ross Smith before meeting Price in the last four. Aspinall, the fastest to reach the top 16 through a Tour Card entry and the first to win a TV major from outside the top 32 since 2012, averaged 88.72 over Cross’ 84.

In a crazy first night for the “FA Cup of Darts,” Michael van Gerwen crashed out at the first hurdle for the second year in a row. Mighty Mike lost to Jeffrey de Zwaan at this stage a year ago, and this year it was Mervyn King who bettered the world number one. The game marked sweet revenge for King after MVG branded him a “disgrace to darts for not even trying to win” when they last met earlier this season at the Players Championship Three. All this on the night when Steve Beaton knocked out Gary Anderson, Raymond van Barneveld said goodbye to the UK Open following a 10-7 defeat to Simon Stevenson and Peter ‘Snakebite’ Wright was sent packing by Mensur Suljovic.

In a sign of things to come for Michael van Gerwen, a lacklustre performance from the world champion went punished. Just as he did at the UK Open on Friday, MVG played poorly on the Premier League’s fourth night of action and was soundly beaten, this time by James Wade. At 3-2 up, Mighty Mike wasted three darts to take the sixth leg, allowing The Machine to level the scores. Wade, the European and World Series of Darts champion, then began to take over the match, moving two legs clear before landing a 12-dart, 121 checkout on the bull to clinch at least a point. Just 17-darts later, Wade closed out the win, ending with the better average of 95.65 compared to the world champion’s 94.33.

In the second matchup of the evening, Gerwyn Price was held to a draw by this week’s contender, ‘Cool Hand’ Luke Humphries. Despite being a disappointing result for The Iceman, he does at least maintain his unbeaten start to the 2019 Premier League Darts season. In the end, it went down to the wire, with the Welshman taking the final leg to secure his third straight draw. Having raced into a 2-0 lead, it didn’t look like a match that he would struggle. Humphries pulled one back immediately before both players registered 12-darters. First, Price fizzed in a 147 checkout which preceded Cool Hand’s 161 bullseye finish. Price raised his level with a nine-dart finish, thereafter, briefly getting the crowd behind him. Humphries then won the next three legs on the spin, leaving Price needing to win the next leg to level the scores, only for Humphries to guarantee himself at least a draw with a 13-darter in the next. With victory in sight, the contender missed double 14, letting Price back in and saw him take out the required 76.

Cross, Suljovic and Smith with victories

Rob Cross, who reached the UK Open final over the weekend, enjoyed his best week for some time after he beat Daryl Gurney 7-1 in his latest Premier League match. In a one-sided match, Voltage raked up an average of 102.16 and finishing seven doubles from ten attempts to send Superchin packing. With a whitewash looming one leg from home, Gurney — who averaged only 90 — took out an 80 checkout to avoid complete humiliation.

Mensur Suljovic scored his first of two wins over Peter Wright in a week on Thursday when he recorded a 7-4 triumph in Exeter. In what was his first Premier League victory of the season, The Gentle won six legs on the spin after losing in the first to find himself a comfortable 6-1 lead. Snakebite then came into life, hitting dual 180s as part of an 11-darter in the first of three legs to go the Scotsman’s way. That was as good as it got for Wright, despite throwing five maximums to Suljovic’s zero as the Austrian took 14-darts to close out the match.

In the final match of the night, Michael Smith, playing after recovering from emergency surgery, booked a decent 7-4 win over Raymond van Barneveld. Barney initially benefited from Bully Boy’s obvious discomfort, taking an early 3-1 lead, before Smith fought back with the next three to go one ahead. Barney only had one leg left in him from there as Smith went on to bank his first win of the year’s Premier League campaign.

In the first match of the night, we’ve plumped for a revived Rob Cross to beat Michael Smith. I firmly believe Smith will finish higher up the table than his rival tonight but his surgery hasn’t fully healed, and Voltage has looked like he is finding his best form of late. That said, Bully Boy did manage to nick a win from 3-1 down against Raymond van Barneveld to claim his first win of the campaign a week ago. But Cross’ thumping of Daryl Gurney 7-1, plus his victory over tonight’s opponent in the UK Open semi-finals over the weekend – his 10th win in 13 meetings overall – makes him the favourite to take the points this week.

This match is followed by Daryl Gurney and James Wade, who conquered Mighty Mike van Gerwen last week and so goes into this week’s battle on a high. In contrast, Superchin is still to record a win in this year’s competition and was played off the oche last week against a rejuvenated Rob Cross. While Gurney will be looking for a response, The Machine should get the job done.

Gerwyn Price is yet to taste defeat in the Premier League this season. This week he faces Mensur Suljovic, who doesn’t seem to enjoy this format. The Gentle did manage to bank a win seven days ago against Peter Wright, a trick he repeated a day later, but has only won four games in 13 against Price. The Welshman almost struck a nine-darter last week against contender Luke Humphries while he also made the last four in Minehead on Sunday and this form should see him right this week.

Providing he doesn’t implode – always a distinct possibility with Snakebite – Peter Wright can be expected to overcome the challenge laid down by the retiring Raymond van Barneveld in match four. Wright suffered his first defeat last time out and now finds himself outside of the top four. Barney still hasn’t had a win in his last ever campaign and is currently propping up the table. The Dutchman’s confidence is low and Wright should be able to take advantage, especially playing back in Scotland. Yet, it is Peter Wright so we can take nothing for granted. Snakebite at a pinch.

A rare Premier League defeat for Michael van Gerwen last week was swiftly followed by another loss a night later in Minehead. While that should enthuse his rivals, it is a shame for them that the world number one now faces this week’s contender John Henderson. MVG will be determined to put things right in Aberdeen against home favourite The Highlander, and anything other than a win is unthinkable.