All The Favourites Win In Darts Premier League

Following the withdrawal of an already-eliminated Kim Huybrechts, who had suffered a personal bereavement, a reduced card took place last Thursday in Cardiff and offered little in the way of surprises.

Favourites Michael van Gerwen, Phil Taylor, Gary Anderson and Raymond van Barneveld all won their respective games and, to complete the set, Peter Wright was awarded the points for the forfeited Huybrechts match.

The week that was in the Darts Premier League 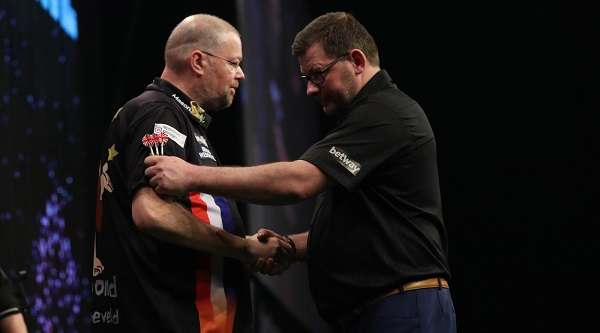 Snakebite was awarded a default 7-0 win for what would have been the opening match against Huybrechts, which meant that the first dart of the night was thrown by Phil “The Power” Taylor against the also already-eliminated Jelle Klaasen.

Klaasen found himself with a 4-1 lead but Taylor proved class is permanent as he fought back with an unanswered run of four straight legs followed by a 180 in the final leg to take the match 7-5 and keep himself in with a chance of a top four finish.

The world number two was the next out at the Motorpoint Arena where he produced arguably the night’s most impressive performance, posting an average of 107.13 as he dismissed Adrian Lewis.

Anderson was in top form throughout; “Jackpot” had no chance as Anderson hit five 180s and a 170 checkout in his 7-3 rout.

Making light of his own admission that at his age he is unable to string a run of results together, Raymond van Barneveld recorded his fourth successive Premier League victory with a never-in-doubt win over James Wade.

Having beaten MVG last week and Gary Anderson the week previous, Barney almost recorded a whitewash against a poor and fading James Wade, who took until the fourth leg before landing a double. However, a Wade comeback was nipped firmly in the bud by the Dutchman, who ran out the 7-2 winner.

Another Dutch winner closed the night in emphatic style as Dave “Chizzy” Chisnall was made to feel the full wrath of a wounded Michael van Gerwen, who had lost for the first time in 45 televised matches a week previous.

Unsurprisingly topping the table, Mighty Mike crushed Chizzy 7-1, helped by an average of 104.25, although the St Helens man did hit five 180s and averaged over 100 himself. However, “Chizzy” was let down by his inability to land the doubles.

From here on out, the remaining eight players will all meet again before a top four is determined. This quartet will progress to Final’s Night at the O2 Arena in London on May 18.

Let’s take a look at this week’s matches and see if we can find some value.

As Wade’s challenge begins to fade, “The Machine” will need a result here in the night’s opener in order to stay in contention. Unfortunately for James, he meets world number one Michael van Gerwen, fresh from an almost-unanswered victory over Dave Chisnall in last week’s closer.

Wade himself fared little better than Chizzy last week, going down 7-2 to an imperious Barney. Like most darts fans, I wouldn’t bet against MVG making it a double Dutch horror show for Wade this week.

Our second Dutchman is up next in what could be a momentous night for darts. This, potentially, could be the last-ever match between darting giants Barney and “The Power”. Obviously, given the quality of these two players and their tendency to win tournament matches, that scenario is unlikely – but the threat remains all the same.

For a whole slew of reasons, this is as tough to call as they come. I’ll leave it up to form and back RVB – although history tells us to never bet against Phil Taylor, especially given Barney’s concession that he cannot play at his top level in back-to-back matches. With a second match later in the evening, the Dutchman may have eyes on an easier tie with James Wade.

Far easier to call (or at least, it should be) is the third match of the evening which pairs the faltering Dave Chisnall with Peter Wright, who was given a bye last week due to Huybrechts’ withdrawal.

Wright has been in decent form over the last month or so and so should emerge victorious here. One 7/2 bet worth taking is this beauty from SkyBet under the match trebles tab:

Much the same will be expected of compatriot Gary Anderson in the following match, where he faces two-time world champion Adrian Lewis.

“Jackpot” unquestionably has the ability to hurt Anderson, but now that we have reached the business end of the tournament, we should expect Anderson to go up a level performance-wise. If he does, there should only be one outcome in this tie.

The evening’s last match will see James Wade and Raymond van Barneveld step out for the second of their double headers in order to satisfy the card following the departures of Kim Huybrechts and Jelle Klaasen.

On the face of it, Barney’s brilliant form of late would, should and does make him our favourite – and yet, given he will have already stepped up to the oche earlier in the evening (and has complained about playing once weekly already), will a second match in as many hours be asking too much? It’s a tricky one but he would be a popular addition to the final four so we’ll stick with Barney.

So then, this week’s accumulator will be MVG, draw, Wright, Anderson and Barney which pays out 22.46 to the pound at Betway.

Barney, by the way, is 14/1 with Bet365 for an outright tournament win. Given his form, an each-way bet which pays a quarter of the odds for a runner-up finish looks very tasty.