Wouldn’t you just know Michael Van Gerwen would pick last week’s match against Gary Anderson to take his clog off the pedal and settle for a draw. With it, he shot my down my accumulator that would have otherwise paid out nicely. Thanks, Mike. 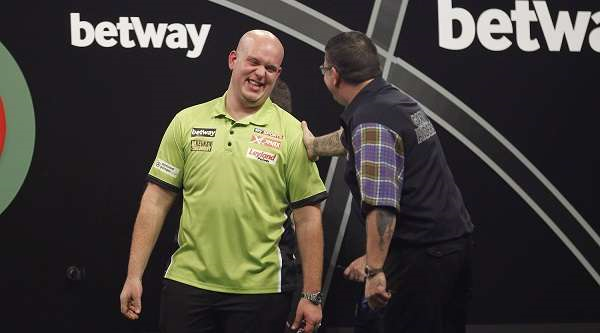 Despite that result, last week’s opening night went largely according to plan. The expected elite, Mighty Mike and Anderson aside, all delivered as intended. Phil Taylor, Peter Wright, James Wade and Raymond Van Barneveld all came away with wins

Barney in particular was made to work hard for his victory, however, as he fought back from 4-1 down to shake off Adrian ‘Jackpot’ Lewis in Newcastle. As mentioned, Van Gerwen failed to get his Premier League title defence off to a winning start but could cheer himself up knowing that he did manage to extend his unbeaten run in PDC competitions to 33 matches.

Six-time Premier League champion Phil ‘The Power’ Taylor began his last ever season as a wildcard pick and took little time to dispatch Dave Chisnall 7-3, while James Wade emerged the 7-5 victor in his opener against Kim Huybrechts. Earlier in the evening, Peter ‘Snakebite’ Wright was the night’s other winner having seen off Jelle Klaasen 7-4.

While last week’s opening night went (almost) as predicted, night two in Nottingham should also hold few surpirses, so long as you can pick wisely from certain games.

Lewis v ‘Chizzy’ opens the night and is one of the tighter games to call. Going on past results, I think Lewis should reclaim enough form at least to overcome Chisnall. The only other question mark surrounds the waning powers of the legend that is Phil Taylor and his opponent James Wade. True, ‘The Machine’ can throw a spanner in the works of The Power’s leaving party, but assuming he leaves the spanner at home and throws darts instead, I’m going to stay loyal to The Power, not quite ready to say goodbye just yet.

At Betway, an accumulator, from earliest start time onwards, picking the following wins (H, A, A, A, A) pays out 12.69 which is where I will be looking this week. Cue MVG Meltdown!

In terms of the overall tournament, last week’s results have done little to alter the prices on offer for the outrights, save for pushing ‘Jackpot’ Lewis out to 33/1 with SkyBet.

Let’s have a quick look at outright relegation instead then. Given the likelihood that Jelle Klaasen and Kim Huybrechts won’t make the last eight, the race is on to see who can finish bottom of the pile. Bet365 are laying 5/4 on the Belgian Huybrechts and 7/4 on Klaasen of the Netherlands.

If I were to pick a droppee from the big six, then I think the best darts betting tip might just be Dave Chisnall. While the odds are shorter on James Wade, ‘The Machine’, when on form, is an impressive chucker and tough opponent. On that point then, I’ll go with an unlikely outsider for an early prexiteer in Dave ‘Chizzy’ Chisnall, at a best price of 9/1 with Bet365 who are also offering 12s on Adrian Lewis missing the cut, following his defeat in round one, if only to make things interesting.