In a great week for bookmakers, four out of last week’s five Premier League matches ended in a 6-6 tie. What this means is that things remain pretty much unchanged at the top of the table where Michael van Gerwen, Phil Taylor and James Wade are all unbeaten as we reach the quarter point of the League stage. 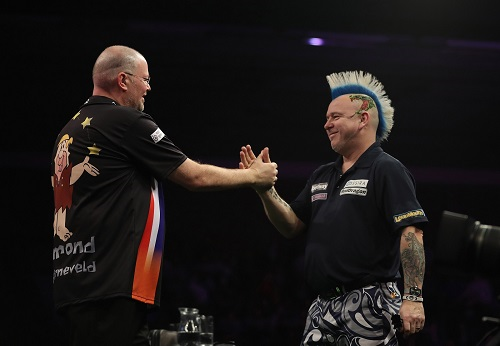 The only result that finished definitively was the fight out between Dave Chisnall and Jelle Klassen which ended positively for the Dutchman leaving Chizzy’s short-lived revival hanging by a thread. The Englishman was unable to avoid the cut last year and could well suffer the same fate this year after dropping the points in Klassen’s first win of the campaign.

So, it’s on to the Westpoint Arena in Exeter for week five where Chizzy is up first and, with Klassen and Huybrechts meeting in the follow up fixture, he will need nothing short of a win. On the previous two nights that he has competed in the opening match he has lost and is unlikely to break that habit here given that his opponent is Dutch legend Raymond van Barneveld. Barney has come out on top five out of their last six meetings and should be stretching that record further.

This is followed by a match that will surely help to shape a relegation battle that looks increasingly likely to include these two, Klaasen and Huybrechts, plus Chisnall. Kim was one of last week’s drawing players in a match against Phil Taylor, while Klassen was last week’s only winner after seeing off Chizzy and so goes into this clash with the most momentum. Even in his defeats he has looked in good shape and this was against MVG, Gary Anderson and Snakebite Wright so I think he has enough to drop Huybrechts here.

The night’s most interesting game comes third when Gary ‘The Flying Scotsman’ Anderson takes on ‘The Power’, who is yet to lose a match this campaign. Taylor, at 5/2 with SkyBet to win the tie, is worth looking into, purely as he has the weekend off, something that cannot be said for Anderson who is the better player these days but will be turning out in the UK Open, the only major tournament that interrupts the Premier League season. There is a quick note about the Open below, but we already know that Thursday will likely impact on some of the weekend’s performances. Even so, this is tough one to split so we’ll put this one down as a draw.

The unbeaten pair of Michael van Gerwen and James Wade step up in match four and, while MVG is the superior talent, James ‘The Machine’ Wade is looking very strong right now. When you filter in the fact that Wade won this tie last season and that Adrian Lewis took points off of the world number one Dutchman last week, any heavy backing on van Gerwen could potentially come back and sting you. Of course, in all likelihood it won’t, this being Michael van Gerwen n’all.

Adrian Lewis and Peter Wright close out the night and with Jackpot losing to Wright in their last three meetings he will be feeling the pressure tomorrow night. While two-time World Champion Lewis has the by far the better career CV, he has been in terrible form of late which is in contrast to his Scottish opponent, Wright who has been steadily improving and is always self-confident if a little too self-critical. Either way I expect it to be all Wright on the night for a Snakebite win.

My Betway treble for the week is Klaasen, van Barneveld & Wright all to win at 9.25/1

One day after Matchday 5 of the Premier League, the players, well, some of them, will be heading off to Butlins in Minehead for the UK Open. Yes, this Friday, the only major tourney to interrupt the DPL, begins before climaxing on Sunday where Michael van Gerwen is 4/7 at Bet365  to win outright. The event will be shown live on ITV 4 and would be a shock if the Dutchman was not to win but hopeful bettors can pick an outright selection from Anderson (6/1) and Wright (12/1) with the rest drifting from 22’s onward at Bet365, where, interestingly, James Wade is on offer at 33/1.

Watch live on Sky Sports from 7pm GMT as well as worldwide through the PDC‘s series of broadcast partners.