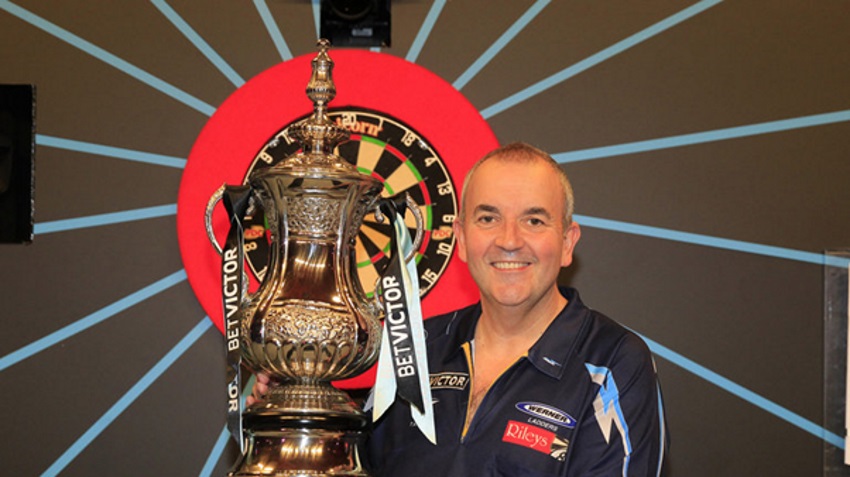 One more for the road for Phil Taylor as he made his glorious bow before impending retirement.

It was the fairy tale ending we were all hoping it would be in Blackpool last Sunday as the greatest darts player of all time marked his final ever appearance in the great ballroom with a championship win. Matching his World Championship tally, victory landed The Power with his 16th Darts Matchplay win.

It was always the win favoured by romantics, but with Michael van Gerwen the current best in the world and in almost unbeatable form for the past two years, most never truly believed it would happen. In fact, Taylor began his campaign last Sunday as a 20/1 outsider, but this being the Winter Gardens, his favourite stage, there was a certain air of inevitability about how things might turn out.

The big change in momentum came in Wednesday night’s quarter final when the big two met, with MVG being cast aside by The Power in surprising and thrilling display which saw Taylor win 16-6. Mighty Mike has barely put a foot wrong in professional darts over the past two seasons, winning just about everything on the table. Here though, he was clearly overwhelmed by such a fanatical crowd as they cheered their English hero. Van Gerwen, who Taylor had branded “stupid” for using a mobile phone during his game with Simon Whitlock, refused to speak to the media afterwards. No matter.

Stoke legend Taylor has been utterly ruthless and dominant in this North-Western venue over the years, as one of only three competitors who have won the event, first held back in 1994. The other two are Dutch pair MVG and Raymond van Barneveld, and it was the latter who became the second victim of Taylor’s run to the final. Famous old foe Barney, went down 11-3 in a somewhat surprisingly comfortable victory.

Fellow Potter, Adrian Lewis was another to fall at the hands of The Power, losing by 17 legs to 9 in the semi-finals, while Gerwyn Price was shot down 10-5 in Taylor’s opening match a week last Sunday.

A legend cements his legacy

All this eventually led to Sunday night’s dream climax as The Power, walking out for the 107th time at this event, met Snakebite in a battle with Peter Wright that went 18-8 in the Englishman’s favour. Wright, hoping to claim his second career TV title, was all that was standing between him and yet another darts record. He was not up to the challenge.

Taylor, in his Matchplay 17th final, averaged 104.24 as he raced to a speedy two leg lead before winning two of the next four while Snakebite foundered. Just a few legs later, the lead, though trimmed, was still massively in The Power’s favour at 8-6. Taylor went on to win the next four legs to move 12-6 up, before Wright landed himself a brilliant but futile 13-darter. By now, 56-year-old Taylor was just four legs away from his record breaking title.

Wright then started to misfire double upon double, and before long, Taylor had landed his seventh 180 to move within touching distance, before victory was secured and history made courtesy of a double 16 in the last leg to seal his 16th title.

The Power himself summed things up, “It’s lovely, it really is and I’ve loved every minute of it. To win a major at my age is fantastic, and I’ve had a tough week when you look at the draw. I’ll miss this place tremendously. I’ve loved it here since the first time I walked through the door. It’s great to win again and it will go down in history, and I’m delighted for everyone who’s supported me.”

A respectfully upset Snakebite added, “Phil is still the best in the world and he’s showed that this week. I’ve watched Phil demolish other players in finals and I was on the other end of that big stick that he normally bashes everyone with but it was a privilege in his last game here.”

Of course, the ultimate dream would be to sign off at the Ally Pally in January with what would be hi 17th World Championship win. Currently. Taylor’s 9/1 with Sky Bet to do exactly that.

What If These Premier League Managers Were Darts Pros?Phil Taylor Takes On Mighty Mike In Blackpool