The Grand Slam of Darts has provided a week of great darts entertainment leaving us with our final 8. 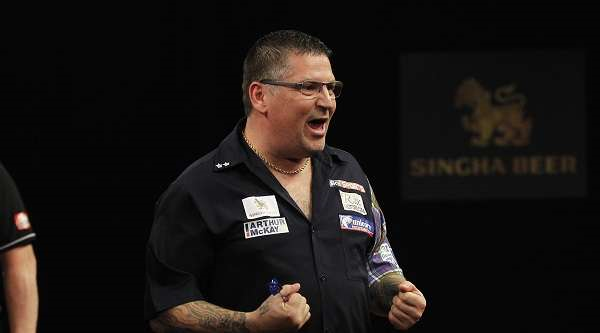 Despite losing 5-0 in what is possibly the shock result of the tournament so far, Phil ‘The Power’ Taylor is into the quarter-finals and will step back up to the oche tonight in the stand out match of the round against Peter ‘Snakebite’ Wright.

It is the second of tonight’s two games, following a brilliant week at the Wolverhampton where almost everything has gone to plan for the big names, Adrian Lewis aside.

A win for Taylor here in game two will likely see him face MVG, who plays in tonight’s first game against Brendan Dolan which could in turn, lead to a thumping semi-final on Sunday.

In the second stream, whose matches play tomorrow, Gary Anderson will meet Barney first up after just about overcoming Danny Noppert, while James Wade will need to see off the challenge from Chris Dobey, who beat Jamie Hughes last night.

In a week that began with the world’s top players doing their own version of the Mannequin Challenge, the action has been brilliant, not least the 5-0 drubbing Phil Taylor suffered at the hands of Darren Webster, even if The Power had already qualified by then.

Unfortunately, the table topper bet I placed last week didn’t hold up, even though I opted for Raymond Van Barneveld over Mensur Suljovic to top Group F, which he did. Indeed, Michael Van Gerwen, Robert Thornton, Peter Wright, Phil Taylor, Gary Anderson, Raymond van Barneveld and James Wade all won their groups as they were expected to. Then, the round robin stage’s last group, Adrian Lewis incredibly came bottom, winning no matches and shooting down mine and everyone else’s otherwise decent bet. Thanks Jackpot!

Robert Thornton was gone by the second round, however, as he met MVG straight out of the groups and was promptly dismissed 10-5. James Wade who topped his group, which included Dave Chisnall, swiftly saw off Benito van de Pas 2-10 while in the last tie of round 2 Raymond van Barneveld dispatched the last remaining BDO representative Glen Durrant 10-7.

MVG is first out tonight and it really shouldn’t take him too long to move Brendan Dolan aside who is 14/1 at Bet365 just to come through this evening’s match. It’s game two that should provide the best action of the night as Peter Wright and Phil Taylor face off for the right to play, in all likeliness, Van Gerwen on Sunday. Taylor is odds on across the board, while Wright can be picked up at 7/4 for a win tonight, which I am toying with.

Both Bet365 and Betway are laying odds of 7/1 for The Power to take the crown and there is every possibility that the overall winner will come from his predicted semi-final face off on Sunday. The second batch of matches, to be played on Saturday, sees both James Wade and Gary Anderson odds on to emerge from their respective games and meet up in the second of Sunday’s semis. For the outright winner, I’m sticking with Anderson, MVG aside, and the Scotsman is 4/1 in all of our partner rooms.

Who Will Win The BDO World Darts Championship 2017?Van Gerwen Cleans Up In Glasgow Ahead Of Grand Slam Defence