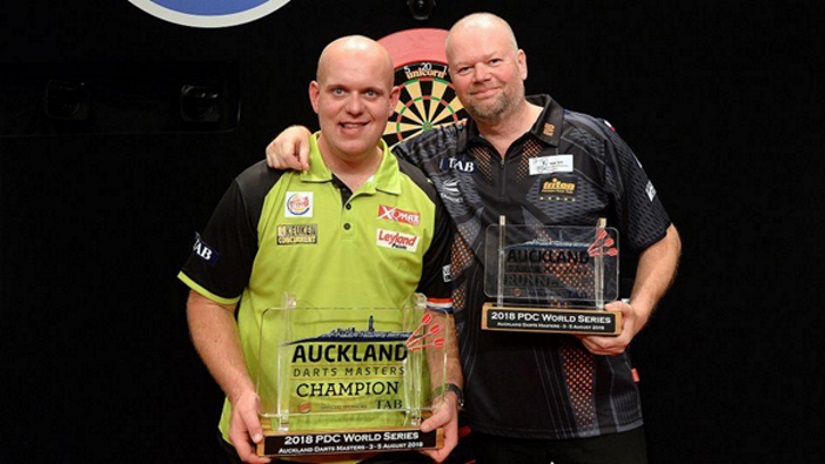 Michael van Gerwen beat his compatriot Raymond van Barneveld in the final of the Auckland Darts Masters last Sunday. The win marked his return to winning ways and put his World Matchplay disappointment behind him during a dominant tournament which saw him win 37 legs and drop just 13.

After crashing out in the first round in Blackpool to another Dutchman, Jeffrey de Zwaan, the world number one thrashed World Cup teammate Barney 11-4 in Sunday’s final at the Trusts Arena. Only one round earlier, MVG destroyed Peter Wright 10-3, aided by an average of 102 plus consecutive checkouts of 170 and 164 in a match that looked to be heading in the direction of a whitewash until Snakebite clawed back a few legs and added a hint of respectability to the rout. All that after his rival had dispatched the World Matchplay champion Gary Anderson 10-4 in Saturday’s quarter-finals.

Other action from Auckland

For Barney, a win here would have been his first solo title since winning the Darts Premier League in 2014 but the former world number one was on the back foot throughout, quickly falling 6-1 behind. He did manage to put together a run of three successive legs to close things slightly, all the while landing five 180s compared to Mighty Mike’s one. The worse of the two averages wasn’t going to stop MVG, however, subsequently reeling off the next five legs without reply, including a checkout of 156.

MVG ended the final with an average of 97.62 over the 93.74 hit by Barney, who was appearing in his second Auckland Darts Masters Final after losing out to Adrian Lewis in 2015.

Barney was also in good form successfully seeing off Aussie Simon Whitlock in their semi-final match, hitting four 100+ checkouts and an average of 103 during a 10-5 victory that set him up in the final against Mighty Mike van Gerwen.

Incredibly, this was van Gerwen’s first World Series of Darts title of the year. Overall was MVG’s 16th tournament of the season and 110th singles title, not including his World Cup victories, which were won in partnership with Barney earlier this year.

Last week’s winner — and quite possibly this week’s too — Michael van Gerwen, is the 8/11 favourite just ahead of Gary Anderson’ 5/1. Rob Cross comes next in the betting at 7/1, while Peter Wright is a decent 10/1, ahead of Michael ‘Bully Boy’ Smith’s 14’s, which is very a very handsome offer. Finally, Raymond van Barneveld’s 25/1 fills an all-Aussie sandwich of Corey Cadby’s 16’s and the 25/1 Betway have laid on Simon Whitlock.

The full draw for the upcoming Champions League of Darts was made recently, along with the schedule for the BBC-televised event, which takes place at The Brighton Centre on September 22-23. The format of the event is based on two groups of four, with the top two progressing to the semi-finals.

In the group stage, the players play each other once in a best of 19, with two points awarded for a win. The top two in each group will progress to the semi-finals, where the group winners will play the runners-up of the other group over 21 legs, with the two semi-final winners then meeting over a 21 leg final. The eight players making an appearance this year are Michael van Gerwen, Peter Wright, Rob Cross, Gary Anderson, Daryl Gurney, Simon Whitlock, Dave Chisnall and last year’s shock winner, Mensur Suljovic.

The Austrian defied pre-tournament odds of 40/1 a year ago when he beat Gary ‘The Flying Scotsman’ Anderson 11-9 to win his first major televised title, in a tourney in which he also beat tournament favourite Michael van Gerwen, who was knocked out in last year’s group stage. Can we expect similar upsets this time around? We will publish prices nearer to the event.