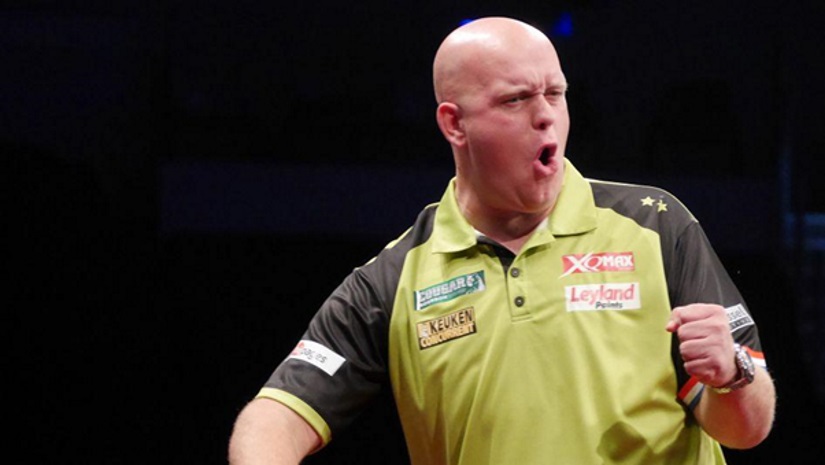 Michael van Gerwen beat James ‘Lethal Biscuit’ Wilson 8-6 at the German Darts Championship final in Hildesheim over the weekend to claim his seventh victory of the European Tour and his 17th title of the season so far.

Van Gerwen, who hit a 103.56 tournament average across the weekend, raced to a 3-0 lead in the final before the Yorkshireman notched up a tidy 44 to land his first leg.

MVG no match for Wilson

After MVG’s strong start, Wilson then wired the double 16 that would have rewarded him with a break of throw. Instead, the mistake allowed a clinical Mighty Mike to step up to land duel checkouts of 118 and 154 and open up a daunting 5-1 lead. Wilson wasn’t about to roll over and he soon dragged his way back into the match by claiming the next two legs on the spin to find himself at a more respectable 3-5 deficit. The fightback wasn’t to last however, as MVG soon impressed his dominance on the game once more to move within a leg of the title at 7-3.

True to form, Wilson refused to go down without a fight and amazingly reeled off three successive legs to give world number one a serious fright. Not that it showed on Van Gerwen, however. He merely shrugged it off and finally put an end to Wilson’s resistance with an 11-dart leg to lift the German Darts Championship for a second time.

Wilson’s strong performance against MVG was even more remarkable given that his Dutch opponent had only dropped one leg in his previous four matches combined after thrashing Cristo Reyes and Martin Schindler each 6-0 and Joe Cullen 7-0 in the semi finals. Only Dave Chisnall managed to claim a single leg against Mighty Mike in their quarter final match, in which he too was shot down 6-1.

Wilson’s route to the final saw him overcome hard fought ties against Jermaine Wattimena, Jonny Clayton, Robert Thornton and Ron Meulenkamp 6-2. He then overcame the odds to drop Mensur Suljovic 7-4 to set up his first ever European Final in what was a very strong performance for the 46-year-old who last year played under the nickname “The Jamie Dodger.”

Coming up this weekend — September 7 to September 9 — we have the Dutch Darts Championships at the MECC in Maastricht. Suitably for Holland, one of their own is the standout favourite. Michael van Gerwen can be picked up for a best price of 8/13. It’s hard to see where his main challenger will come from, especially considering he will be on his own turf with his own army of fans in full support.

The second favourite is Peter Wright at a much more attractive 5/1, although he has had a messy 2018 and any faith in him has been severely tested this year. Enjoying a much better year is Mensur Suljovic, who can be backed at 12’s. Considerging that Betway’s each-way terms for this event pay out at 1/3 of the odds for the first two places, it’s probably worthwhile looking into backing the runner-up, for which Mensur stands a great chance.

Elsewhere, James Wade can be picked up at 22/1, before Adrian Lewis’ 25/1 and Daryl Gurney’s 28’s. Other potential long shots include Dave Chisnall at 28/1, Gerwyn Price and Simon Whitlock, who are both at 66/1 with online bookmakers Betway.