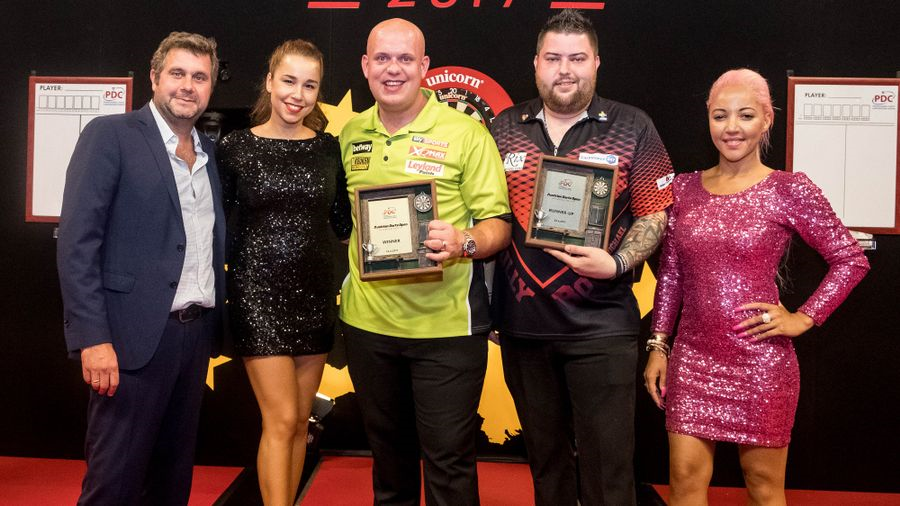 Michael Smith was the latest victim, seen off after a fine display in which Mighty Mike ran out the 6-5 winner.

For the Dutchman, this was his third European title of the season so far, having landed wins in both Jena and Hamburg already in 2017. This time, MVG took home £25,000 for his dismissal of former World Youth Champion Smith.

Merseyside resident Smith enjoyed success in Gibraltar last month when he won the Gibraltar Darts Trophy, his second win of the year, which moved him into the top 11 players in the world.

Here, though, the 26-year-old was no match for MVG despite initially opening up a 2-0 lead against the world’s best player – even scoring a 13-darter featuring a 180 as he broke his brilliant opponent early on.

It wasn’t to last, as van Gerwen hit back to level. Smith remained upbeat and defiant when many others would crumble before an imperious van Gerwen on a mission. The Englishman hit 86 on the bull to stretch his lead to 3-2 before landing a magnificent 170 checkout to move even further ahead.

Mighty Mike isn’t one to tolerate such uprisings, though, and before long had struck back once again, this time courtesy of a 14-darter. Crucially, Smith then missed an all-important shot at the top allowing MVG to land yet another 13-darter, before going one better with a 12-darter in the deciding set to secure his 17th career European Tour win.

It’s back to Germany for this week’s European Darts Open event, specifically the Ostermann Arena in Leverkusen.

The matches run from Friday to Sunday and the betting for is shaping up as follows.

No money to be made with Mighty Mike

As ever, there is little-to-no value on Michael van Gerwen who is 4/7 at Bet365, just ahead of Peter Wright at 4/1 with the same sportsbook.

“Snakebite” has gone quiet of late following a decent first half of 2017.

An early exit in Vienna last week only compounded his humiliation from the Darts World Cup a fortnight earlier when Scotland, for whom he paired with world number two Gary Anderson, bowed out early following a defeat to Singapore.

If the popular mohawked Scotsman is your pick, then know this: he is a half point higher in Betway’s book than any other; you can find him at 9/2.

Sadly, there is no book running on which hairstyle Wright will be sporting on Sunday but with America’s Independence Day just days away, there is a good chance he might be stars and stripy.

For anyone that might be thinking Michael Smith might go one better this time around or, at the very least, equal his Austrian heroics of last week, Bet365 are listing him at 33/1, which is decent enough for an each-way punt.

The same almost applies for James “The Machine” Wade who is a sturdy 40/1, as is Kim Huybrechts. While the book runs longer, I wouldn’t look beyond these chuckers if I were you.

Inside of these prices, you’ll find Dave Chisnall, 18/1, Mensur Suljovic, 20/1 (both at Betway), and Adrian “Jackpot” Lewis who is currently available at 28/1 with both Bet365 and Betway.

Snakebite Bites Back: Peter Wright Wins Ninth PDC Title Of 2017Who Are The Best Darts Players Of All Time?