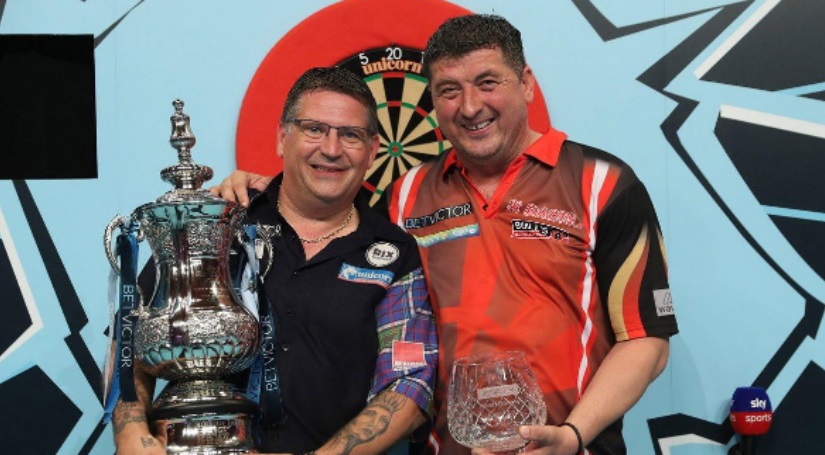 Our pre-tourney outsider darts betting tip Mensur Suljovic came close to winning the World Matchplay Darts event, the biggest of his career thus far. Ultimately his efforts came up short after losing Sunday’s final to Gary Anderson, who can now claim to be a Triple Crown of Darts winner.

In what was one of the greatest televised finals and the longest in Blackpool history, The Flying Scotsman won his first World Matchplay after defeating The Big Gentle 21-19. With his victory, Anderson becomes only the third player to achieve the feat. Anderson joins Phil Taylor and Michael van Gerwen to land the Triple Crown, which is made up of the World Matchplay Darts, the World Championship and Darts Premier League.

47-year-old Anderson had appeared on the brink of victory at 17-13 ahead before Suljovic reeled off four successive legs, including a 121 checkout on the bullseye, to ensure a thrilling battle in which both players needed to win by two clear legs. It was actually the Austrian who scored heaviest throughout the final with an average of 104.43, while Anderson landed 101.41. Both players hit 14x 180s.

Suljovic then moved 18-17 ahead before Anderson hit back to restore parity. The following two legs went with throw, but only after Anderson’s dart hit the bull wire which would have won him the title but instead bounced out to allow Suljovic to seize momentum with a superb 11-darter.

The match reached its conclusion when Anderson landed the double eight after Mensur dropped two attempts at 40. Anderson then rounded things off with a 15-darter on double 10.

On his way to glory, Anderson defeated Raymond van Barneveld before shooting down Joe Cullen with a magnificent nine-dart finish in the quarter-finals. On Saturday, he got the better of Mighty Mike’s conqueror Jeffrey de Zwaan, who also dispensed of Dave Chisnall and Adrian Lewis. His epic win on Sunday was his second TV major title of the season after the UK Open in Minehead back in March.

For Suljovic, this was his third major final and despite defeat, he will be really pleased to have pushed one of the game’s all-time greats to the limit. In making the final, Suljovic reached his first World Matchplay final after a hard-fought 17-13 victory over Peter Wright. Prior to this, the Austrian saw off Darren Webster, Ian White and Steve Beaton.

The players now head Down Under for the next three weeks for the World Series which starts in Brisbane this Friday. The following two weekends will see players attend the Melbourne Darts Masters and the Brisbane Darts Masters.

The Wizard, last seen losing 16-5 to Peter Wright in Blackpool, is in a positive mood ahead of his visit home. The top-ranked Australian star, now seventh in the world, will be among the 16-players at the Trusts Arena from August 3-5. The remaining eight players — drawn from the Oceanic pool — are Corey Cadby, Cody Harris, Warren Parry, Haupai Puha, Tim Pusey, Tahuna Irwin, Mark McGrath and John Hurring.

None of locals are expected to offer much of a challenge to the eight players from PDC; however, and it goes without saying that Michael van Gerwen is the hot favourite at 4/5, while fresh of the back of his triple crown win is Gary Anderson, second favourite at 5/1.

Backers of Rob Cross will be pleased to find him available at 6/1, while Peter ‘Snakebite’ Wright fans would have to consider the 10’s offered by Betway to be excellent value. If you are considering backing an Aussie, take note of the 20/1 offered on Corey Cadby and the 40/1 price on Simon Whitlock’s head. Rarely, over the past few years, has Gary Anderson looked in as good a form as he showed last week and, at 5/1, I think he keep his form up a little longer even after the long journey south.