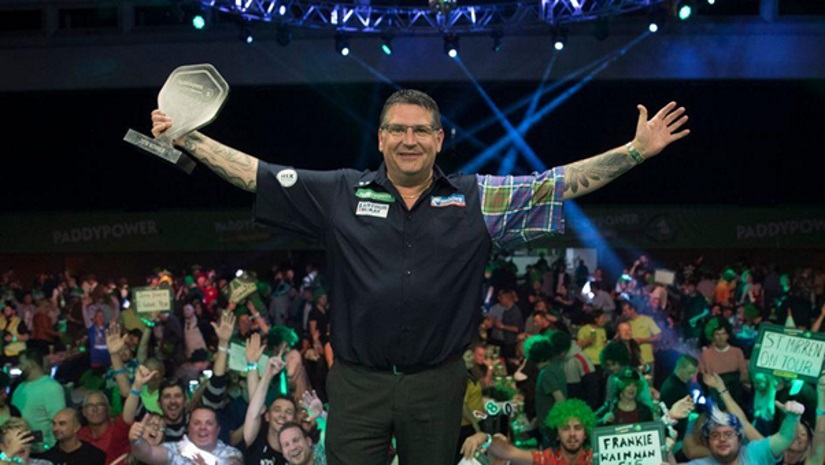 As we predicted here last week, the world number three Gary ‘The Flying Scotsman’ Anderson shipped the Champions League of Darts in Brighton on Sunday. Trouncing a much-improved Peter ‘Snakebite’ Wright in the final, Anderson won his third major TV event of the year having already claimed the UK Open and World Matchplay.

Only moments earlier, Anderson eliminated last year’s victor Mensur Suljovic 11-4 in the semi-final and in the process avenged his 2017 final defeat in the same tourney. Anderson topped his group after surviving two missed match darts from Michael van Gerwen in the deciding leg of their last group match that would otherwise have sent him packing. Instead, he qualified with the Dutch superstar to go into the knockout stages of the competition at the expense of Daryl Gurney, who just missed out despite his 10-7 win over Dave Chisnall.

This meant that Group A’s runner-up, MVG, lined up in the semi-final against Peter Wright, who came second to Mensur Suljovic’s in Group B. In the semi-final, Wright produced a brilliant effort to come from 8-5 down to see off MVG in an 9-11 victory, landing three 10-dart finishes on the way. This was a pleasing weekend for Wright, who has never made it out of the group stages in either of the previous two years of the event.

Gary Anderson, who has also won two World Championships and two Premier League crowns in his career, returned to the oche for the final where he was far too good for Wright. Banking a 140 checkout straight out of the gate, and breaking Snakebite’s throw three times, he soon raced into a commanding 6-1 lead. Wright fought hard to bring the game back to a 4-7 scoreline before Anderson reeled off the next four legs, closing out the game with three ten-darters and a 65% checkout to land his first ever Champions League title.

The PDC’s third longest-running televised event, the World Grand Prix, is due to take place at the Citywest Hotel in Dublin from September 30 through October 6.

The 32-player field has now been confirmed, and reigning champion Daryl Gurney will be there to defend his title. Alongside Superchin will be the world’s top 16 players plus the 16 qualifiers from the ProTour Order of Merit.

The World Grand Prix features a sets format and a unique “double-start” rule, which means players must both begin AND end every leg with a double throughout the entire event.