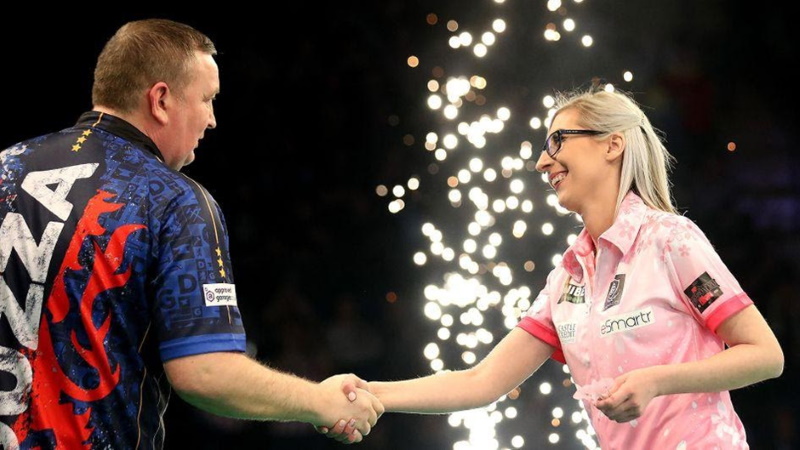 All eyes were on the Queen Of The Palace Fallon Sherrock as she stepped back into the PDC spotlight on Thursday. Shockwave Sherrock was taking her turn as the latest challenger and actually came within two darts of yet another history-making moment by almost beating Glen Durrant, which would have been by far her biggest scalp yet.

A hugely under pressure Duzza managed to salvage a draw with the last throw of his darts meaning Sherrock, who had the fans firmly on her side, had to settle for a 6-6 draw against the former BDO World Champion.

Odds on favourite Durrant wasted five darts with the match at 3-2, allowing Sherrock to break first before she raced ahead 4-3. Before long, she stretched her lead to 5-3 as Duzza looked like wilting under the pressure of a match he admitted beforehand he was dreading and his missed doubles soon began to stack up.

With defeat looming, Duzza managed to dig deep and recompose himself and, with a 1art hold of throw, brought himself back in the match before wasting three more shots at double 16, allowing Sherrock to book herself a draw on her next visit. With two legs remaining, Duzza began to save his blushes and took the last two of the match, staving off defeat with one and banking a draw with the other when he finally found the elusive double 16 with his last dart in hand.

A recap of Night Two

Peter Wright was dealing with an ankle injury during his match up with Gary Anderson. Snakebite, whose usual pre-game dance was much hampered and shortened, picked up the unusual injury lifting his wife Jo’s suitcases out of the car on arrival at their hotel. Nevertheless, despite his pain, he had enough about him to take a share of the points in this all Scottish and good-natured affair.

In a high-quality game, both World Cup winning partners averaged above 100, but it was the limping Wright who took the initiative when he moved into a 4-2 lead after landing five maximums. Anderson came back into the match though and before long had moved 5-4 ahead thanks to a 15-darter. As the game moved forward on throw, Anderson went 6-5 ahead, ensuring he would at least get a draw but Snakebite landed his sixth 180 of the match before the deciding leg before checking out on 101 to share the spoils.

The following game of the night provided the fans with the night’s third draw as Gerwyn Price staged a superb comeback from 6-2 down against Michael Smith. Bully Boy was throwing brilliantly in the early stages and The Iceman, who himself was throwing well and averaging over a ton, simply couldn’t live with his opponent, who took out the next three legs. Price managed to keep his hopes alive in the following leg, and as the Welshman was hanging in there, Smith missed two match darts in the 10th to let Price off the hook. Having somehow survived, Price turned the game on its head completely and the two-time Grand Slam of Darts champion completed his comeback when he landed a lifesaving 14-darter.

After three draws, there was no such charity on show in the final match of the night where Michael van Gerwen absolutely annihilated Daryl Gurney in a 7-1 riot. The five-time champion is the only player left in the mix with a 100% record and averaged 105.05 while pinning seven of his 11 attempts at doubles.

Mighty Mike opened up proceedings with a 13-darter which he followed up with a 104 checkout as he aimed to exact the 11th whitewash in Premier League history, which also would have been MVG’s fourth, as he breezed to a 6-0 lead. Gurney avoided such an indignity by taking the seventh, but there was no way back for Superchin as MVG takes his seat at the top of the table.

In Night 2’s opener, Rob Cross claimed a 7-5 win over Nathan Aspinall. It was a tight match and level as late on as 5-5, before Voltage turned on the afterburners in the final leg, so much so that commentator Wayne Mardle joked he’d now moved into Lincolnshire. With double 16 waiting, Voltage spurned all three efforts and should really have been punished by The Asp. The newcomer left himself with 54 to allow Cross another visit and three more chances, the first two of which were also wasted by the former electrician.

Voltage’s fifth missed dart landed awkwardly and completely obscured the chucker’s view forcing him to step widely to the right, hence the Mardle gag, but from there landed the miracle shot that had somehow evaded him from the far easier oche before closing out the match in the final leg with a 12-dart break of throw.

Night 3 of the Premier League Darts takes us to the Motorpoint Arena, Cardiff. As we stand with two weeks gone, the league table has a familiar look to it with Michael van Gerwen sitting top of the pile, Glen Durrant is in second and Rob Cross is third.

It’s Voltage, who is first out, as he takes on world champ Peter Wright. Snakebite is still to win a game after his two Premier League bouts so far, having lost to van Gerwen a fortnight ago and then a draw with Gary Anderson last week. In truth, he played well in both games and was unplayable at times, but Cross has come firing out of the blocks this season and this could well be the third match for Wright in which he fails to win. I don’t think he’ll lose though so this tight affair could possibly end in a share of the spoils. Snakey is the number one 180 chucker in the competition so far this season with 10 so there is a market there for his fans to exploit if they so wish. Wright is 5/6 to score the most 180s again with Betway.

Challenger Jonny Clayton takes on Michael Smith next in a matchup that could be a tougher fight for Bully Boy than the others will face when they take on a local contender. That’s because, of all the challengers competing in the Premier League this year, no one is ranked higher than the world number 16. This, plus the vociferous home support cheering on their fellow Welshman, means Smith definitely has his work cut out this week. Last week, he was imperious for long periods in a game he somehow let slip against another Welshman, Gerwyn Price. If he maintains that form he should just about take the points here too.

Michael van Gerwen goes up against Nathan Aspinall in the follow-up. MVG has a perfect record so far with two wins out of two while The Asp has a win on the board also. It’s hard to make a case for Aspinall here though in his bid for a second win as Mighty Mike is in such form and will almost certainly make it three from three.

The crowd will be cheering – which makes a change – for The Iceman in match four as Gerwyn Price steps out for his match with Daryl Gurney. While neither player has won a game in this year’s Premier League, Price can at least take heart from the fact that he hasn’t lost either. Superchin, on the other hand, has lost both so far and was on the end of a whooping last week only narrowly managing to avoid a whitewash. Price should get his first win here and I think he will.

We close the night with 2nd placed Glen Durrant and Gary Anderson, who sits in 4th. Anderson has been the more consistent in his two games, following up his victory over Gurney by tying with Peter ‘Snakebite’ Wright a week ago in Nottingham. Duzza was excellent in his first week but was shaky last week against Fallon Sherrock as he let the pressure get to him. He held his nerve to fight back and draw the game and a tie wouldn’t surprise this week in the Welsh capital either.