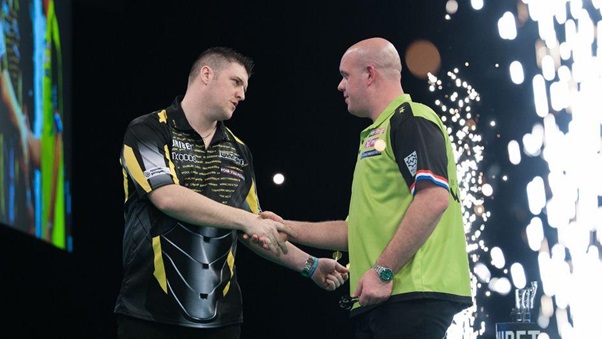 There was a shock result in Berlin last week when Michael van Gerwen lost in a surprise 7-5 defeat to Daryl Gurney on night seven of Premier League Darts. It is the second time in a row that the Northern Irishman has enjoyed victory over van Gerwen, having also triumphed in the memorable Players Championship Finals match back in November.

Things started off by Mighty Mike taking the opening two legs before Superchin pulled back the next two to draw level. MVG raised again in leg five but still couldn’t escape Gurney, who won the next two to move into the lead for the first time. Soon after, he doubled his lead before MVG closed the gap to one leg at 4-5. An 86 checkout guaranteed Gurney a point before van Gerwen landed a 93 to send the match into a 12th leg where Gurney hit double top on throw to beat the Dutchman. Gurney closed with an average of 98.71 compared to MVG’s 98.54 but hit two fewer 180s with four.

Recap of other Night 7 action

League leader Rob Cross kicked off the night with a 7-4 victory over Gerwyn Price. It was the second defeat in a row for Price, who up until last week, was unbeaten in the League this season before losing to MVG in Berlin. Voltage, who averaged over 100 for the sixth time this season, finished on Thursday with a mark of 104, opened with a 13-darter to break The Iceman’s throw and take an early advantage before holding his own in leg two. The Welsh Grand Slam of Darts champion then got on the board himself as he chucked an 86 checkout before another 13-dart finish from Cross saw the 2018 World Champion restore his lead. Cross followed this up with a finish on double nine to go 4-1 ahead, before Price broke back, only to lose the next as Cross moved into a 5-2 lead. Price took the next two legs before Voltage came back to take the final two legs for himself, and with it, the top spot in the table.

The next pair out were James Wade and Peter Wright> In true Snakebite fashion, Wright once again conspired against himself to snatch a draw from the jaws of victory. In a match that should have been done and dusted much sooner, Snakebite found himself 5-2 up before long. By the eighth leg, Wright missed three darts at double allowing Wade to get back into the match. Despite missing numerous opportunities to do so, Wade would get more chances as Wright continuously refused to close out the leg. Finally, at the third time of asking, The Machine took his chance and kept his hopes alive. With momentum building, a 65 finish got Wade to within one of his opponent, courtesy of another two more misses from Wright, before the Scotsman would miss yet again leaving Wade to level the match with a shot at double 10. Wade then made it four legs on the spin to move into an unlikely lead before Wright finally rediscovered his aim to salvage a point from a game that should never have been in doubt. In the end, Wright averaged 98.93 compared to Wade’s 98.42.

Mensur Suljovic produced a dominant display in match four as he saw off the challenge from Michael Smith to bank a 7-2 win. It was Bully Boy who took the opening leg with a 75 finish, but that was before the Austrian replied by reeling off five in succession to leave Smith well and truly stunned. Smith did manage to respond in leg seven with an 86 checkout, but a 77 finish from The Gentle took him to within one of victory, which he sealed one leg later.

Raymond van Barneveld finally got off and running in his final Premier League campaign after he beat the latest contender German Max Hopp 7-3 in Berlin. After finding himself a leg down, Barney moved clear in the match before Hopp won back-to-back legs to close the gap to 4-3. From there, Barney seized momentum and produced a moment of genuine magic to take out 170 to inspire a closing finish that went unchallenged. Although the former World Champion remains bottom of the table, his upturn in form, coupled with this week’s doubleheader in his native Holland is well-timed and might even inspire the mother of all survival fights with Judgment Night looming on Thursday after Wednesday’s fixtures, both of which will take place in Rotterdam.

The latest odds to finish bottom on Judgment Night with Betway – before the first of this week’s two nights of action – are as follows.

Raymond van Barneveld is favourite for the drop at an odds-on price of 2/9 and with Daryl Gurney and Michael van Gerwen standing in his way you can see why. Last year’s runner up, Michael Smith is next in line at 7/1, one point lower than Daryl Gurney’s 8/1. From there, the prices drift with Gerwyn Price rated as 50/1, James Wade 100/1, Mensur Suljovic and Peter Wright also available at 100/1.

Gerwyn Price’s impressive start to the campaign is officially over now that he has suffered back-to-back defeats to both Michael van Gerwen and Rob Cross. Smith, on the other hand, is in the midst of a relegation battle after losing dramatically to Mensur Suljovic 7-2 in Germany. There is now only point separating Bully Boy from bottom-placed van Barneveld, who won his match last week. It is a closer relegation scrap than expected and especially surprising given Smith’s second place finish last year. It is still mathematically possible for The Iceman to exit the competition himself this week but extremely unlikely given he hadn’t lost until a fortnight ago, albeit his campaign has been littered with draws. In his latest battle, he can be backed to overcome so we’re going with Price to win in the opener.

The second match of the evening brings us our latest contender in the form of Dimitri van den Bergh, who faces off against James Wade. The Machine has enjoyed a patchy return to Premier League action and was lucky to snatch a point last week against Peter Wright. On form, he is still a formidable opponent and should have more than enough to see off the challenge from Van Den Bergh.

Match three pits Rob Cross against Mensur Suljovic with Voltage now showing himself to be one of the top two players in the world right now. Sitting top of the league by two points and with confidence riding high, Cross should have too much in his locker for The Gentle, who has quietly installed himself as an outside chance for glory. Following three wins in his last four, Mensur now sits in fourth place but any progress is likely to be stalled on Wednesday.

An out of form Michael van Gerwen is out next against Peter Wright with neither player managing to secure a win last week. Van Gerwen failed to take control of a match he led 2-0 as he lost 7-5 to Daryl Gurney while Snakebite blew a lead when throwing for the match against James Wade. However, the Dutchman’s confidence received a boost on Sunday when he beat Rob Cross 8-6 to win the European Tour title, while also hitting a nine-dart finish in his semi-final success over Suljovic. Draw specialist Wright has tied four of his seven matches so far and would love a similar score in the first of this week’s doubleheader events but a return to his homeland for MVG means he is unlikely to get it.

Raymond van Barneveld gave his survival bid a much needed shot in the arm last week in Berlin and now has two nights back home in Holland to pull off a miraculous great escape. The first of these is against Daryl Gurney who last week beat Mighty Mike van Gerwen. All logic says this should be a fairly straightforward win Superchin but romance, not to mention the home crowd, might dictate a win for the departing Dutchman.