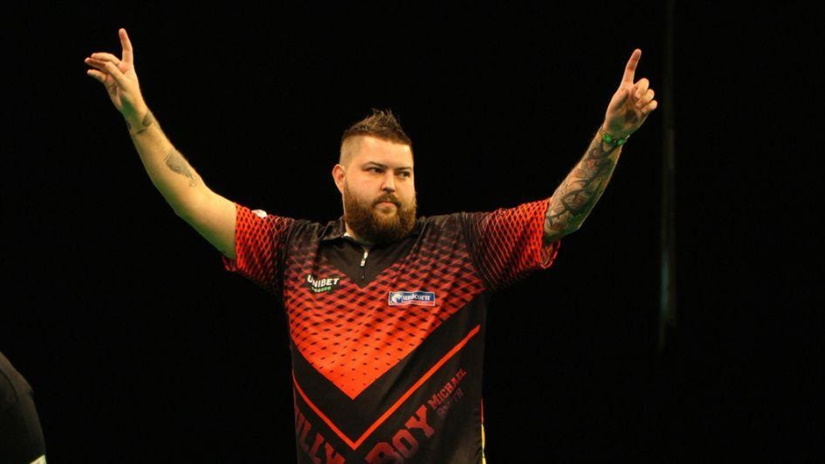 Michael Smith hit the ninth televised nine-darter in Premier League of Darts history and the first of his career during his 7-5 victory over Daryl Gurney in Dublin. It was a perfect leg that was hit in reply to Gurney going 2-1 up after his own impressive 11 darter.

Despite how it sounds, it was overall a low-quality match where both players averaged down in the 80s and there were four 20 dart legs in the match not that Bully Boy will mind. The man from St Helens joins Raymond van Barneveld (2), Phil ‘The Power’ Taylor (x3), Simon Whitlock and Adrian ‘Jackpot’ Lewis (x2) in the esteemed nine-darter club after he found the perfect leg for the first time since Lewis in 2017.

In an exciting battle of the debutants, Nathan Aspinall came out on top as he inflicted Glen Durrant’s first defeat of the Premier League season in a 7-5 win. There is a growing feeling and momentum behind The Asp, not least after he beat Michael van Gerwen a week ago. His dismissal of Duzza will do nothing to stop the chat. For those interested, The Asp is available for outright league victory at 10/1 with betway.

In truth, both players struggled to find their best form in a tight match that opened the night in Dublin. Aspinall, who averaged down in the low 80s and soon found himself trailing 3-1. By the fifth leg, The Asp started to show his teeth and clawed his way back to 4-4 before unleashing a stunning 129 finish to edge ahead. Duzza did claim one back before Aspinall picked off the board in the remaining few legs to see out the match.

Gary Anderson got back to winning ways after he closed out a 7-5 win over Rob Cross. The Flying Scotsman averaged 97.77,  but Voltage managed to hang in there for the most in a match that went all the way to a decider. Come the ninth, which Anderson branded as tripe post-match, the Scot landed an 85 checkout to complete a whopping 24 darter to take a 5-4 lead, but only after Cross had wasted two shots at the double. Soon after, the two-time Premier League champion saw off the 2019 World Matchplay champ with a match-winning 14 darter that gave him the points.

Michael van Gerwen once again occupies the summit of the Premier League table after he inflicted swift defeat on this week’s contender, Irishman William O’Connor, who received a hero’s reception from the Dublin crowd. The 33-year-old Magpie would later go on to say the night was the greatest night of his life despite the 7-4 scoreline. O’Connor posted a strong enough average of 95.31, particularly given the lack of quality on show elsewhere with more established chuckers this week, while Mighty Mike recorded 97.62.

Gerwyn Price ended his run of three successive draws against Rob Cross, Michael Smith and Daryl Gurney in dramatic fashion by beating the world champion 7-1. In truth, Peter Wright was woefully out of form and The Iceman wasn’t required to break a sweat as he hit a lone maximum in a disappointing affair that should have been a class battle of the big guns but proved to be little more than a practice match for the Welshman.

Night Five in Exeter gets underway with a clash between two more than capable players who have yet to show us their best in this year’s tourney. Rob Cross has fared better than his opponent this week, Daryl Gurney, but not by much and Voltage’s averages have been well below what he would have been expecting. The Hastings man has shown a battling spirit and can at least boast the better head-to-head record with Superchin who simply hasn’t got going at all this season and as such is on to lose again this week.

The league’s only undefeated player steps out next as Gerwyn Price takes on Glen Durrant. Price was in fine form last week, cruising to a 7-1 win over Snakebite, although Snakey’s average of 83.59 made it all too easy for The Iceman. Duzza has done well so far in his maiden Premier League campaign but unless he improves his finishing from last week he is going to struggle against Price, who is playing as well as anyone right now.

Peter Wright and Nathan Aspinall go head-to-head in the third match of the night in a match that will have the world champion worried. Not only is The Asp the inform player of the two but he has won on three out of the four occasions the pair have previously met, including their only ever televised meeting at the 2019 US Darts Masters in Las Vegas.

In their most recent meeting earlier this season, Aspinall hit a nine-darter in a spectacular 6-4 victory. Aspinall is also in the middle of prepping for his first career title defense of the UK Open, which gets underway in Minehead on Friday. In his last two Premier League matches, Aspinall has won 7-5 twice, seeing off Michael van Gerwen and Glen Durrant and now finds himself at the top of the table, three points above Wright. In contrast, Wright froze in front of The Iceman and almost got whitewashed. To that end, expect The Asp’s venom to be stronger than that of the Snakebite.

Luke Humphries is this week’s challenger as he comes up against Gary Anderson, who has been both in and out of sorts this season making it hard enough to predict which version of the two-time world champion will show up, let alone predict the outcome of his matches. That being said, the Flying Scotsman should have too much for Cool Hand, who reached the quarter-finals at the Alexandra Palace in each of the last two seasons. He has only been featured in two other televised tournaments, the UK Open and the Players Championship Finals and will likely just be looking to enjoy the limelight.

The final match of the evening sees the two Michaels – Smith and van Gerwen – take to the oche. While MVG is the undeniable best player in the world, Smith can take heart from hie nine-darter against Daryl Gurney last week in Dublin, even if the match itself was poor. Will this perfect leg set up the Bully Boy to break his televised tourney duck at the UK Open this weekend? 20/1 at bet365 says he just might. Mighty Mike isn’t playing particularly well or badly this season and is sitting top right now but he’s not quite his normal formidable self of old and Smith is good value to maintain his current momentum.

Play At The Bet365 Casino Before March 8th To Get Your Share Of 200,000 Free SpinsNathan Aspinall Beats Michael van Gerwen In Cardiff