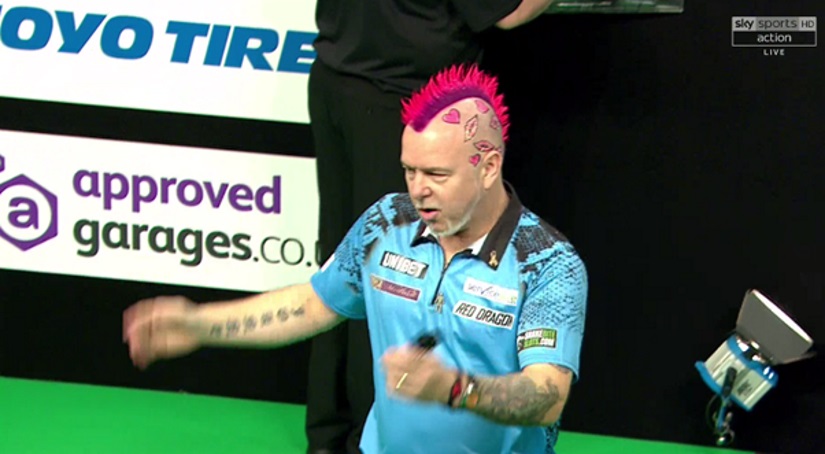 Night 2 of the 2019 Darts Premier League season got underway with a stalemate between Peter Wright and Michael Smith at the SSE Hydro in Glasgow last week.

Smith won the match’s last leg to salvage a 6-6 draw in the night’s opening match after letting a 4-1 lead slip away. Ahead by three, he looked set to move up 5-1, only to miss a dart at tops to give Wright an unlikely route back into the game.

A Valentines-themed Snakebite duly made him pay with a 60 checkout as part of a 15-dart break, only to see Smith break straight back. The Scotsman then produced a 64 checkout before holding to reduce the gap to 5-4. The two previous League runner-ups then split a sloppy leg in which Smith wasted six darts at doubles while Wright misfired three of his own before finally landing the match-leveling leg. Snakebite moved ahead to clinch a point and a likely win, only to see Smith fight back and hold on to his own throw to share the points.

A recap of Night 2

In other action from Night 2 of the 2019 PDC Premier League, Rob Cross scored his first win of the new season after coming from a 3-1 deficit to beat James Wade 7-4. Just as he did a week ago, Voltage averaged over 100 while The Machine scored a respectable 100.81 and one more maximum with both players landing 50% of their doubles. Cross moved ahead 5-3 after a superb 85 finish on the bullseye sent him two clear before guaranteeing himself at least a point with a 72 checkout. Wade was to take another leg before Voltage clinched the victory to move up the table.

Match three of the night produced another draw after Raymond van Barneveld came back from 5-2 down to rescue a point against Gerwyn Price. Price was given a hard time by the Glasgow crowd who haven’t forgotten his antics, which earned him a reprimand against Scots’ favourite Gary ‘The Flying Scotsman’ Anderson. In contrast, the soon-to-be-retiring Barney was cheered adoringly throughout his farewell performance in the city.

The atmosphere didn’t bother the Iceman who is getting used to these kinds of receptions, soon finding himself in the lead despite losing the opening leg. Price took out 107 before an 11-darter and a 120 checkout put him 3-1 up. The Welshman then banked a 14-darter before Barney claimed another leg for himself. A 13-dart break of throw was to follow for the former rugby player who then checked out for 82 to guarantee at least a draw and what looked to be a certain win. Unfortunately for Price, he wasted the first match dart that came his way as he couldn’t find tops to let Barney off the hook. Barney then went on a match-levelling run that included Price missing another match point, much to the delight of the fans.

Week 2’s contender, Glen Durrant was soundly beaten on his Premier League debut where he lost 7-3 to Daryl Gurney. The match marked Superchin’s his first victory of the season after he produced a doubles masterclass against the former BDO man. Duzza was standing in for Gary Anderson, producing a 99.89 average and four 180s. It wasn’t enough against Gurney, who successfully hit seven from nine attempts at a finish, ending the night with an average of 100.05.

The final match of the night saw Michael van Gerwen, already the only player to have a 100% record in the Premier League of Darts, bank a 7-3 win against Mensur Suljovic. The performance was hardly vintage form from MVG but was still enough to win comfortably, as he averaged just shy of 100 compared to his opponent’s 101.07. Mighty Mike missed 10 of his 17 attempts at doubles, but the Gentle wasted seven of his ten. This will never be enough to beat the Dutchman, even if he is playing slightly out of form. The world champion is looking to win the title for the fourth year in a row and has topped the table in each of his six Premier League seasons. Ominously, he already occupies first place in the table, with daylight opening up over Rob Cross and Gerwyn Price. Combine this fact with the absence of Gary Anderson this year and MVG already looks a champion in waiting.

The third night of the Premier League takes place at the 3Arena in Dublin on Thursday and opens with a match between Gerwyn Price and James Wade. After surrendering the last four legs to Raymond Van Barneveld and blowing what should have been a certain win, there is every chance that Price could be deflated going into this week’s game. On the other hand, Wade will be looking to bounce back from his defeat to Rob Cross. Wade has the upper hand between the two, having won his last three meetings against the Welshman. I wouldn’t want to take a draw off the table either but will plump for James Wade to beat Gerwyn Price.

Surely this will be the week when Peter Wright finally gets a win to his name. Snakebite faces off against this week’s Contender, Irishman Steve Lennon. Wright earned himself a decent point last week when under extreme pressure, he staged a comeback from down 5-2 against Michael Smith. The 25-year-old Lennon will benefit from the home support in Dublin, but this is still a big step up for him, and the weight of the occasion could see him struggle. Add that to the fact that Smith has lost all three of his previous matches against Wright should mean we can count on Snakebite to deliver the win here.

Michael Van Gerwen steps out next against former world champion Rob Cross. Already, Van Gerwen looks certain to finish at the top and could do so unbeaten, especially given the absence of his closest rival Gary Anderson. Last week in Scotland, the Dutchman beat Mensur Suljovic without breaking out of first gear, which must have his rivals worried. For those considering going against the favourite, Cross is starting to look more like his old self, but Mighty Mike looks unbeatable right now, even when using half his powers.

Match four sees Michael Smith take on Daryl Gurney. Northern Irishman Gurney should be able to count on support from the home fans. A week ago in Dublin, Smith cited the crowd as one of the factors in blowing a 5-2 lead against Scotsman Wright. With that in mind, Superchin could have the edge in the tough-to-call encounter. That said, despite Gurney showing signs of a return to form by beating Glen Durrant in his last outing, Bully Boy wants to prove that he is one of the best players in the world right now. Head to head, he has also won six of his ten meetings with Gurney, and I would expect him to add to that tally here.

Raymond Van Barneveld and Mensur Suljovic close out the action in Dublin in what will be another tough match. Barney looked a beaten man against Gerwyn Price before stunning The Iceman with four consecutive legs to save a draw and his supporters, of which there are many. He hopes that his fans will provide the lift-off the Dutchman needs to kickstart his last ever Premier League campaign. In contrast, Suljovic seems to struggle in league games and hasn’t really improved on last year’s dismal showing so far this season. During that campaign, Barney beat The Gentle 7-5 and could be in line to repeat that this week.