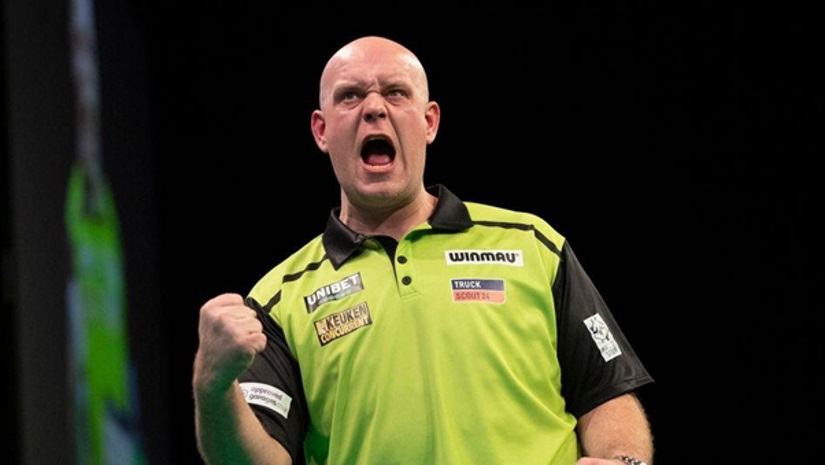 Michael van Gerwen put his early-season shaky form behind him to beat world champion Peter Wright 7-5 in a thriller of a World Championship rematch on Premier League opening night.

Wright followed his Ally Pally triumph by winning the season’s first tourney, The Darts Masters, last week and initially looked in good shape in front of the Aberdeen crowd. Snakebite raced into an early 2-0 lead thanks to a 14-darter and a 120 checkout but will rue not making it three after he missed a hat trick of darts at tops to let the world number one back into the game.

Wright repeated the trick in the fourth leg which proved to be the only invitation the Dutchman needed to get back on level terms. The game then went with throw as both players produced high-quality darts before Mighty Mike took out the remaining two legs to get his campaign off to a winning start.

A review of Night 1

In the night’s opener, debutant Glen Durrant got off to a winning start with a 7-3 victory over 2018 runner-up Michael ‘Bully Boy’ Smith. Duzza had been a part of the previous season’s league as one of the nine challengers but has this year been promoted to a full-time Premier League player. His one game last season also happened to be in Scotland when he lost to Daryl Gurney in Glasgow. There were no such problems this time around as he landed nine doubles while Smith, who lost in the Masters final a week ago, wasted five of his eight attempts.

The Flying Scotsman made his return to DPL action on Thursday after missing out a year ago. Much to the delight of the 7,000-strong crowd in Aberdeen, Gary Anderson managed to turnaround a potential defeat when he fought back from a 5-4 deficit against Daryl Gurney. Superchin was the subject of boos which seemed to work after he missed eight darts at a double plus later on another shot at tops for what would have been a point. These dropped shots allowed Anderson to level the match with a 13-darter before scooping the remaining legs also.

Another debutant took part in the night’s fourth fixture as Nathan Aspinall took on this week’s contender John ‘The Highlander’ Henderson, playing in front of his home crowd. This was a crowd that would leave disappointed, however, as The Asp ran out a 7-3 winner in front of 7,000 fans in Aberdeen. Last year, Henderson managed to bag himself a 6-6 draw with Michael van Gerwen but such a result – and payday – wasn’t to be this year as the UK Open champion was simply too good.

Gerwyn Price just about managed to salvage a draw from his 6-6 draw with Rob Cross. It was a match that never looked like it would get away from The Iceman as he landed three successive legs in just 39 darts, including a brilliant 124 checkout, to take a 4-2 lead. This preceded Voltage securing four legs on the trot including a 100 checkout in a 12-darter to go 6-4 up. The Grand Slam of Darts champion then forced and won a deciding leg to take a point.

Thursday sees the second round of Premier League games, brought to you from the Motorpoint Arena in Nottingham. Dubbed the Sherrock of Nottingham, Fallon Sherrock, who became the first woman to win a match at the PDC World Championships in December, will this week become the first female to play in the Darts Premier League, if only as a local challenger. As ever, the games will all be broadcast live on Sky Sports and the action gets underway from 19.00 GMT.

As we stand, the two new boys – Glen Durrant and Nathan Aspinall – are out in front, although with one match played each so far this isn’t saying much. The Asp is one of the first out on the night as he takes on Rob Cross who recorded an average of 100.10 during his 6-6 draw with Gerwyn Price in Aberdeen. Aspinall banked a decent win but only hit a low average of 89.19 which surely won’t be enough against Voltage.

He is capable but will definitely need to up his game against Cross who I believe will record his first win in the league this season.

Match two pits Gerwyn Price against Michael Smith in a match The Iceman will surely look on as a must-win. Price can be happy with the manner of his draw with Rob Cross a week ago, even if he probably should have won. Bully Boy, however, blew his chance against Glen Durrant and could be heading for two defeats in as many matches.

It’s an all Scots affair for match-three where Gary Anderson meets Peter Wright. Anderson already has a win under his belt after he critically dismissed Daryl Gurney. Wright, however, chucked his chance of a win away when he had MVG on the ropes a week ago.

Snakebite can at least take heart from winning five legs and actually outperformed Anderson in most of the key stats in Aberdeen, hitting the most 180s and having the highest checkout at 6.00, which is enough to tempt me to get behind the world champion this week too.

It’s time for Fallon Sherrock next in a match her opponent, Glen Durrant, admits he is dreading. Duzza should be expecting the crowd to back the underdog and so knows that the crowd will be against him but it shouldn’t impact his ability to take maximum points here.

Duzza should win but for Sherrock fans to find value, back Sherrock to once again produce the highest checkout, as she did in all three of her World Championship matches. For fans of the Queen of the Palace, such an outcome is worth 13/8 at Bet365.

Daryl Gurney and Michael van Gerwen close out the night in a match that it is hard to see the Dutchman losing. Gurney was off his game last week in his defeat to Anderson which is not the form you’re looking for with MVG incoming. Hope can be found in the fact that Mighty Mike lost both of his league matches with Gurney last season before knocking Superchin out in the semi-finals and much the same should be expected this week in Nottingham.