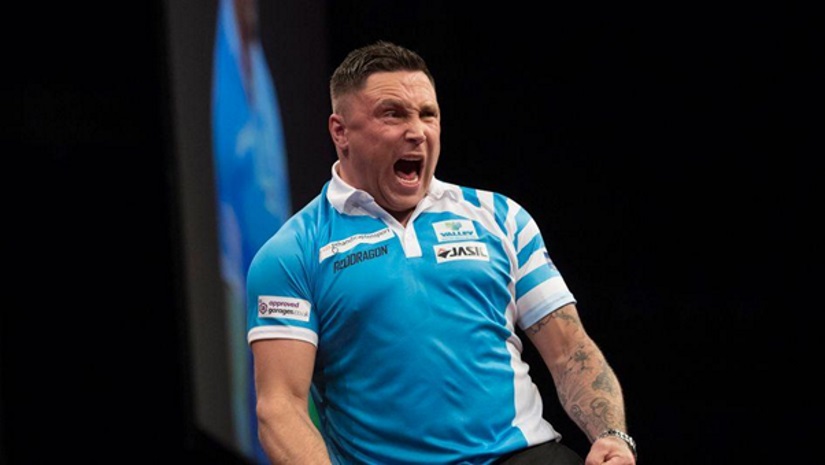 For once Gerwyn Price enjoyed the support of the crowd as the Welshman beat Michael Smith 8-5 in Cardiff last week.

It was an inspired performance in which the former rugby player hit back-to-back 170 checkouts at the Motorpoint Arena. The first of checkouts drew The Iceman level after Bully Boy had hit a 170 checkout of his own when taking the third. The bottom-placed Smith badly needed a win and forced his way in front twice more only to see The Iceman peg him back again. This was followed by arguably the leg of series, which featured four successive 180s from the pair before Price came out on top. From there, Price had little trouble from a deflated Smith before he closed out the match with an 11-darter.

In the battle for first place, Michael van Gerwen is now in the driver’s seat after putting challenger Rob Cross firmly in his place with an 8-2 demolition job. Voltage started stronger, breaking immediately and racing into a 2-0 lead thanks to an 80 checkout, before the match switched completely as MVG took over. After Voltage missed his shot at tops in the third, Mighty Mike made him pay with a 13-dart break of throw before punishing him completely and reeling off the next seven legs. This left Cross to go the rest of the night without getting another shot at a double.

The scoreline was repeated in the match between James Wade and Peter Wright with The Machine coming up the victor. Wright was woeful again and caused Wade, who remains third in the table, little to no problems. The Machine won five legs in succession from 3-2 up, and before The Machine chucked his match-winning double, Wright had missed eight of his own, which included four in that final leg. Wright, who is famous for switching his darts between — and sometimes even during matches — was using a new wobbly set which made absolutely no difference to his form as he succumbed to his fifth loss of the campaign.

The night’s final match was a playoff battle between Mensur Suljovic and Daryl Gurney with the Austrian just about managing to come out on top in an 8-5 victory. The result gives The Gentle a two-point lead over Superchin as he moves into 4th place with London looming. It was another scrappy affair and either player could have won.

Indeed, Gurney wasted 19 of 24 double attempts that would have made all the difference. He even blew a bullseye attempt for a 170 checkout in the third. It provided Suljovic with the opportunity he needed, duly replying with a close from 100 in 14 darts. Things were all square after six legs before Suljovic landed back-to-back legs in 13 and 14 darts, which established a two-gap lead that would last long enough to guarantee the Austrian a point. Gurney did manage to pull one back but Suljovic soon got himself over the line by taking the following leg and with it the match.

With The O2 just a month away now, Mensur Suljovic is firmly in the hunt for a playoff spot in fifth place as he shares points with James Wade and Gerwyn Price. In contrast, Michael Smith, who was the 2018 runner up, is currently bottom and another defeat last week only further dents his chances. Suljovic beat him 7-2 on night seven and with it all to play for, the Austrian could well repeat that scoreline again here in Birmingham.

The night’s second match features the challengers Rob Cross and Gerwyn Price. 2nd place Cross was on the wrong end of a spanking a week ago, while Price — currently in 4th with 14 points — defeated Bully Boy. In truth, come the end of May, I would expect both players to make the final four based on current form, but as things stand this week should see Voltage spark back into life and take the points. That said, don’t be surprised to see the unpredictable Iceman threaten the 2018 world champ who has won four of their six meetings.

The only things unpredictable about Peter Wright right now are his hair colour and choice of dart. His Premier League form has been nothing short of woeful for a man of his talent with little chance of making it to the playoffs. Superchin, on the other hand, is still in the hunt, even if he can be considered an outsider. Both players lost last week but Gurney at least held his own in defeat and should beat Snakebite, who left Cardiff embarrassed at the hands of James Wade.

Finally, Michael van Gerwen takes on James Wade, who is one of three players sitting on 14 points. Mighty Mike stamped his class and his authority on the league last week as he squashed Rob Cross and averaged 107 almost without reply. In contrast in his match, Wade averaged only 94 but still won out 8-2 — the same as MVG — and will be in confident mood having won three PDC titles relatively recently. The Machine also beat Van Gerwen in the Premier League earlier on this season, but the Dutchman will have too much for him on this occasion.