Just days after winning the UK Open, Peter Wright beat James Wade to go one point clear at the top of the Premier League, a move that saw SkyBet bring him in slightly to 5/1 for the outright tournament win.

“Snakebite” carried his UK Open form into the night’s second match and instantly chucked himself into a 5-1 lead which, despite a decent attempt at a comeback from Wade, was enough to see the Scotsman home as he finished off a 7-5 in Glasgow. 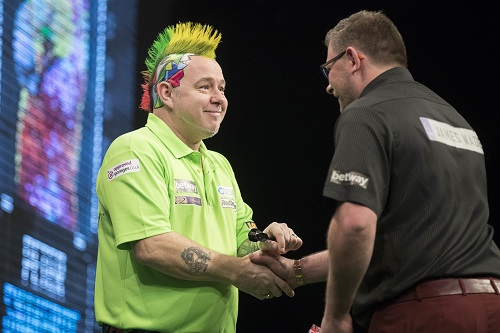 Earlier in the evening, Adrian Lewis inflicted a surprise defeat on Phil Taylor, giving The Power first loss of the season. Meanwhile, Michael van Gerwen just about made a winning return from injury at the SSE Hydro.

Jackpot’s 7-4 victory, by far the biggest shock of the night, gives his survival hopes a lift. Even though he was unlikely to get drawn into the bottom scrap, his form has fallen short enough at points this season that relegation remained a threat. Now a mid-table finish looks more likely.

Michael van Gerwen returned this week following a back injury that saw him withdraw from week six and the UK Open. He found the going tough however as Kim Huybrechts proved a tough nut to crack. Crack he did though as MVG eventually ran out the 7-5 victor to move a point behind Wright in the table with a game in hand.

The Glasgow crowd helped roar Gary Anderson to a 7-3 win in the fourth match of the evening. Anderson now moves into the table’s third slot following his dispatch of Dave Chisnall. Chizzy was outclassed on the night (and almost on the embarrassing end of a whitewash) but, thanks to help from the other matches taking place remains three points clear of the drop zone.

Thursday’s last match saw Raymond van Barneveld produce a brilliant fightback after finding himself 4-1 down to Jelle Klaasen. Seemingly out of nowhere, Barney dug deep and threw a checkout of 154 to launch a run of five straight legs which led him to victory and banish Klassen to the bottom of the table.

The best darts bets for this week

James Wade steps out for the night’s opener against bottom-placed Jelle Klaasen. Save for last week when he was neatly put down by an increasingly impressive Peter Wright, Wade has looked in fine form this season and there should be no reason whatsoever that he won’t return to winning ways here.

It’s actually Wright that is next out on Thursday as he looks to play in another near-certain game against Dave ‘Chizzy’ Chisnall. Chizzy showed something of his better game a fortnight ago when he won two in one night. Because he has played a game extra (courtesy of MVG’s back injury), he gets next week off and so will want to enter hiatus on a high, meaning this could be more complicated than it first looks. That said, I’ll be sticking with Snakebite for game number two.

The first of two big hitter encounters is up next when Raymond van Barneveld meets Gary Anderson. Barney is a hard one to call these days whereas Anderson has barley dropped a shot all league long. There will always be a part of me reluctant to go against the Dutchman and, given home crowd advantage, I’ll err on the side of caution on this one and call it a draw.

At Bet365, you can pick up 94/4 on Barney being the first player to break his opponent’s throw. While I am calling the match a draw, given Barney’s skillset, I definitely think that price is too good to turn down.

Second from bottom Kim Huybrechts takes on Adrian Lewis next with Jackpot fresh from taking the scalp of Phil ‘The Power’ Taylor a week ago. Lewis has found himself hanging just above the relegation zone over the last few weeks and, even with a game in hand over Chisnall, his safety looks less than certain. Should he win here, and I think he will, then he should be able to breathe a little easier.

Finally, the night closes on a classic matchup between Phil Taylor and Michael van Gerwen. The champ returned to action with a narrow win last week and now boasts the only unbeaten record in the league. He also sits three points off the top of the table with a game in hand and, with the Dutch crowd behind him, will be looking to see off the old rival one more time.

Taylor, though, has won the last three meetings between the two and often raises his game when pride is at stake. For this week’s accumulator bet, I’m going with one line on Wade, Wright, Draw, MVG and Lewis.

This pays out at 43.17/1 at Betway so is obviously well worth considering!