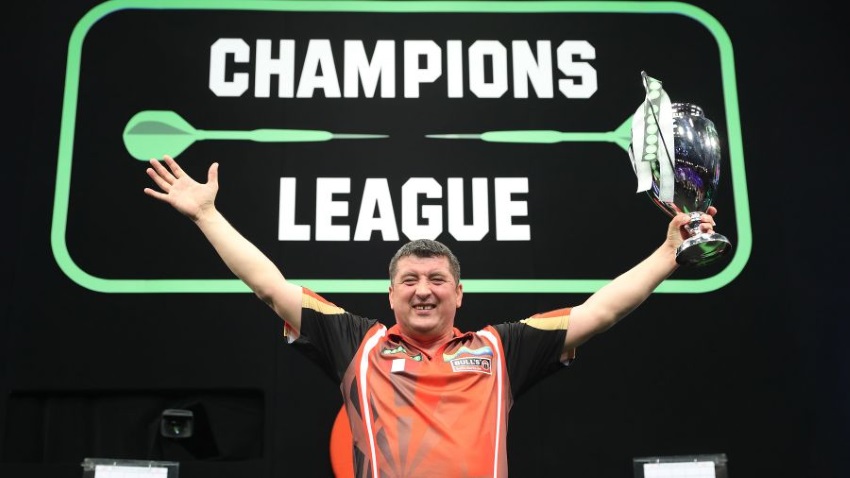 Serbian-born Austrian Mensur Suljovic recorded a remarkable tournament win last weekend in Cardiff when the 40/1 outsider took down this year’s Champions League of Darts live on the BBC.

The Gentle’s win, his first major event victory, came at the expense of world number two Gary Anderson who he defeated 11-9 in the final on Sunday night.

Unlike his opponent, who is a veteran of such events as a two-time World Champion, it was only Suljovic’s second major televised final. Suljovic’s previous final appearance came last year at the 2016 European Championship where he was roundly beaten by MVG. Fortunately for Suljovic, the gulf in experience didn’t show this time around.

The road to victory

In an admittedly scrappy final, Anderson did at least post an improved average, up from their first meeting in the group stages, and beat Suljovic’s 87.85 with 98.03. Ultimately, Anderson didn’t have enough to beat the underdog, who took 11 of his 30 attempts at double and finished on his favourite double 14 to win the tournament, checking out at the second attempt. Surprisingly, Suljovic has now beaten Anderson in four of their last six meetings.

On his way to the final, the 45-year-old also took out Raymond van Barneveld with a 160 check out on his way to a 11-9 win in the semi-final stage.

In the other semi-final, Gary Anderson brought an end to the outgoing Phil Taylor’s Champions League of Darts career with a 11-6 victory. For his part, earlier in the tourney, The Power had knocked out Michael van Gerwen 10-5 in the group stages. Taylor also recorded wins against Raymond van Barneveld and Adrian Lewis to top the group and take his place against Group B runner up, Anderson in the semis.

PDC Director Rod Harrington has now tipped Suljovic for Premier League Darts selection after hailing him as the most improved player on the circuit over the past two to three years. With his victory, he also now a 50/1 longshot at Betway to win the PDC World Championship at the end of the year.

The next big televised major is the World Grand Prix, which takes place at Dublin’s Citywest Hotel from October 1-7 and will be broadcast on Sky Sports. Before this event, players will travel back to Germany for this weekend’s International Darts Open at the Sachsenarena, Riesa.

Last year’s International Darts Open was won by, wait for it, Mensur Suljovic, his previous PDC title win. To repeat the feat this year, he is a 9/1 second favourite in the betting with Betway, a decent darts betting tip given his current form.

With no Michael van Gerwen or Gary Anderson, world number three Peter ‘Snakebite’ Wright is the favourite at 3/1 at the same sportsbook. Third seed Daryl Gurney is a best price 11/1 shot at Betway, while Bet365 lists Rob Cross next at 10/1, before the 12’s offered by Betway for Dave Chisnall, which could encourage some action.

With a major now under his belt, Suljovic is the form man going into the tourney so is as likely a winner as anyone. However, the major talent remains Peter Wright, but his early season form has long since deserted him, failing to even make it out of the groups last weekend. That said, no Phil Taylor, Adrian Lewis, Raymond van Barneveld or the world’s top two opens things up considerably. Such a long price favourite is always worth backing, especially if brings anything close to his A-game to Germany this weekend.

Further down the line, both Rob Cross and Dave Chisnall should be watched closely. Also, keep an eye out too for Kim Huybrechts who, at 25/1 with Bet365, is well worth an outside, each way punt.