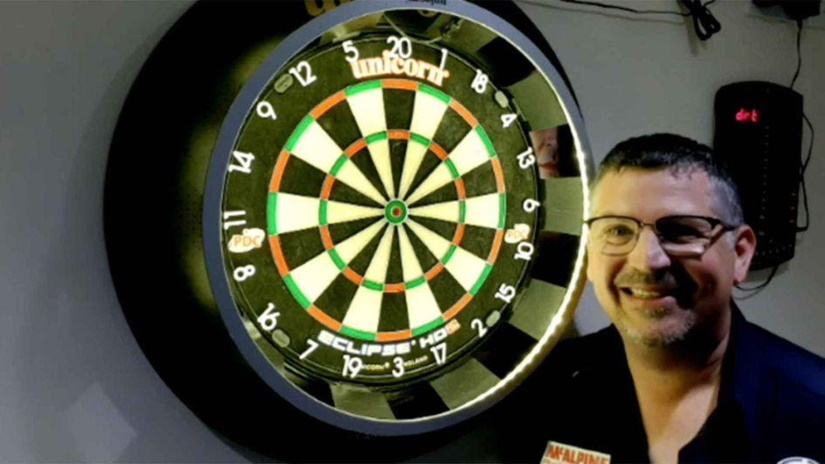 After 31 consecutive nights of darts, we have our names and fixtures for the second round play-off groups of the PDC Home Tour. World champion Peter ‘Snakebite’ Wright will open proceedings on Tuesday 26 May when he takes on Ryan Murray.

Wright required a second chance at qualification in order to see him through after he failed to top his group a month ago. Now, the Scotsman has been grouped with Murphy plus Jelle Klaasen and Cristo Reyes.

There are eight groups from which the top two will go through to two semi-final groups which will be contested on June 3-4, before a four-man Championship Group final on Friday 5 June. Round Two will again be played in a round-robin format with all matches are played at the best of 11 legs. Group winners will be allocated a group determined by ranking order. Any players that cannot, for whatever reason, complete their fixtures will be eliminated.

One player who finally got his Wi-Fi up to the 2020 standard is two-time world champion Gary Anderson will go in Group Three alongside Luke Humphries, Jamie Lewis and Nick Kenny. Anderson amused plenty of people on social media when he revealed his crappy Wi-Fi would stop him competing on the PDC’s Home Tour. Thankfully, Anderson has now changed internet provider and the old boy made it through and will now compete in the next round.

Anderson will be joined there by World Matchplay champion Rob Cross who will play Ryan Searle, Luke Woodhouse and Daniel Larsson in Group Five. While there’s no Michael van Gerwen, Michael Smith, Daryl Gurney or Gerwyn Price, who blew another chance at qualifying after losing his second chance games. Dave Chisnall, Nathan Aspinall will also both be in competition this week.

Viewers on the PDC’s YouTube channel were able to see Nottinghamshire cricketer Alex Hales hit an eight darter, admittedly in a game of 301, but still lose to out to boxer Dave Allen who won all of his matches to become the champion of the play at home games.

To win the group, bet365 have unsurprisingly installed the world champion as the ½ favourite but I can see an upset occurring in this group, most likely to come from 9/2 Jelle Klaasen. Cristo Reyes is always dangerous which could tempt some to take the 11/2 on his head, while Ryan Murphy has been priced at 8/1 to top the group on Tuesday night.

As for Wednesday’s Group Two, Glen ‘Duzza’ Durrant is the clear favourite according to bet365 and we’re not going to argue with that conclusion. Even though games played in living rooms, sheds or wherever are not the same as live arena darts, clearly Duzza should top this group even taking into account the likes 12/5 shot Stephen Bunting who managed a draw against Rob Cross as the Liverpudlian local hero in the Darts Premier League in what seems like a lifetime ago. Mike DeDecker and Alan Tabern have been priced at 11/2 and 10/1 respectively.

The Flying Scotsman is back for Group Three having fixed his internet connection issues at his not so Scottish home in the Somerset countryside. Despite being landed with a tough group that includes Luke Humphries (13/5) and Jamie Lewis (11/2), bet365 have priced Anderson as the odds on favourite to win the group at 4/6. 11/1 hopeful Nicky Kenny will also play in this group.

As the bet365 5/6 group favourite, Chizzy takes sort of centre stage next Friday in a group where he is expected to be challenged by the likes of Damon Heta, who has a 12/5 price on his head, and Darren Webster, who has been priced up at 9/2. Geert Nenties is the 10/1 outsider of the group that looks like it should be Chizzie’s to lose.

2018 world darts champion, Rob Cross is the 10/11 group favourite for Group Five. Voltage is joined in the group by Ryan Searle, with betting odds of 11/4, Luke Woodhouse, who is capable of throwing a surprise or two and who bet365 regard as a 16/5 chance, plus 10/1 hopeful Daniel Larsson.

Sunday sees Group Six start and finish and pits Chris Dobey against Joe Cullen, who have been priced up as 23/20 and 7/4 respectively. Martijn Kleermaker and Jeff Smith make up the numbers and have both been priced up at 6’s by bet365 but the battle for qualification should be between the PDC pair The Rockstar and Hollywood.

Your favourite, and we must say a really rather clear favourite, for Group Seven is Nathan Aspinall. The Asp has been priced up by bet365 at an odds on 8/11 and should top this group or at the very least qualify with the minimum of fuss. Jose De Sousa is the 5/2 second-favorite, ahead of Jamie Hughes (4/1) and Jesus Noguera (18/1).

Jonny Clayton is the favourite for Group Eight at 7/5, a few points higher than German chucker Max Hopp who is worth 11/5. While Hopp is dangerous, Clayton should be able to see this one out given that BDO start Scott Waites and Carl Wilkinson finish off the group. Waites has been chalked up at 13/5, while Wilkinson can be picked up at 8/1.

Venue: Every bloody where

Play at Bet365 Poker by signing up here