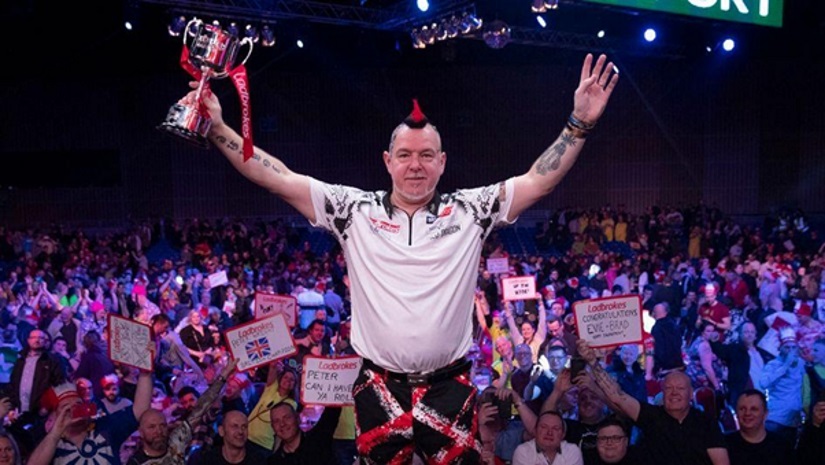 Peter Wright won his second major title in a month and third solo title of his career after he beat Michael Smith in the Masters final at the Marshall Arena in Milton Keynes last weekend. Wright, once a regular final loser, emerged victorious after a dramatic 11-10 victory over Smith, himself now becoming the new regular final loser, to win his second televised tournament in a row.

Snakebite, 50, began the new season how he finished the last but needed to survive three match darts in the deciding leg to do so. A clearly crushed Bully Boy was himself seeking his maiden major title after being a losing finalist in the World Championships, World Matchplay and the Premier League in the last couple of years. He can at least take inspiration from Wright’s turnaround in fortune. After all, Snakebite had lost 10 of his previous 11 finals before finally securing his maiden PDC title, the UK Open, in 2018, almost two years before his World Championships win.

Twice Snakebite established a three-leg lead, at 5-2 and 8-5, only for Bully Boy to reduce the deficit to 8-7. Smith then took out a checkout of 130 to complete a 15-darter to bring the game level but missed tops for a break of throw in the follow up which allowed Wright to creep ahead once more. Snakebite then missed the chance to move two ahead when he missed three clear darts at double 16 for a 10-8 lead.

Bully Boy then landed an 11-darter to take the match into a deciding leg before finding himself looking at a checkout of 98 with Snakebite far behind on 287. With the match his to lose, Smith managed to do exactly that by landing a mere 58, leaving tops for the finish. Agonisingly, he missed all three attempts after the Snakebite’s visit of 171 and would not get the chance to return as Wright cleared up in his next visit to take another major title.

On his way to the final, Wright took care of Joe Cullen on Saturday night before recording the first-ever Masters whitewash against Dave Chisnall and overcoming World Cup-winning team-mate Gary Anderson in the semi-finals. Winner of the previous five events, Michael van Gerwen was eliminated in the first round when he was defeated 6-10 by Jonny Clayton.

The Premier League Darts gets underway again on Thursday making its first stop in Aberdeen. The first night throws up a potential predictor for how the tournament might play out as a whole when Michael van Gerwen takes on Peter ‘Snakebite’ Wright in the opening night’s show-stopper. This tournament will ask some truly tough questions of Wright, particularly about his long term consistency. After back-to-back major wins, we now know that he is capable of producing regular tournament wins, but the Premier League is a weekly event from now until mid-May. Too many sloppy weeks can prove costly as Snakebite found out this time last year.

As the pair meet this weekend, Wright is full of confidence, unlike MVG who went in round one of the Masters. But confidence will fluctuate over the following four months which is something for Snakebite backers to remember before jumping on Betway’s 13/2 outright price. As for the Dutchman, he comes into the tournament as the even-money favourite at bet365 and with some justification too. He is the four-time reigning champion and has won five Premier League titles overall. Mighty Mike has also won the league section of Premier League darts in all seven of the seasons in which he has competed. In the Van Gerwen vs The Field market, you can back anyone else to triumph at 10/11 with Betway.

The other obvious contender to topple van Gerwen is Gerwyn Price. Price, who disappointed at the Masters last week, was looking very strong at the end of the 2019 season and worked his way up to number two in the world. The Iceman lost in the semi-finals of the World Championship to Wright but before that he won the Grand Slam of Darts for the second year running while also making the final of the Players Championship. Last year, he came fifth in this competition, missing out on London but his season grew not long after that and he is now one of the stellar names on the tour. Again, this tournament, more than any other, will pose the tough questions but bet365’s 6/1 looks interesting to say the least.

Former two-time league champion Gary Anderson beat Price in Milton Keynes on Saturday and, while his back still throws up questions, you can never rule out The Flying Scotsman. Anderson was unable to compete last year so he would love to put on a show on his return and is the best price of 12/1 with Betway.

Rob Cross is out of form right now and has been since the summer when he scooped the World Matchplay. A win in this tournament would give Voltage the Triple Crown, albeit not in the same year. So long as he can stay in touch in or around the top four, his form could return in time for London so his price of 12/1 is not to be sniffed at.

Much the same could be said for Michael Smith, who came second in 2018, one of four times he has been a losing finalist. Like Wright, you feel the good times will come eventually and Bully Boy has all the tools needed to do great things in the sport. Betway is offering 22/1 on Smith for anyone interested. Debutant Nathan Aspinall is 20/1 with Betway who has priced both Daryl Gurney and Glen Durrant, another newcomer save for a contender appearance last year, at 28/1.

At the opposite end of the table, bet365 consider Daryl Gurney to be the 5/2 favourite to be relegated. Debutants can often struggle in their first Premier League season and the same bookmaker have priced Glen Durrant at 11/4 and Nathan Aspinall 11/2 to bow out on Judgement Night in Rotterdam.

Above prices available at Betway

As for this week’s fixtures, Michael Smith and Glen Durrant are first up. For Durrant, this is a first but for Smith this is familiar territory. Following his strong showing at the Masters where he missed three tournament darts, Smith will surely bounce back strongly. He is after all used to getting over final disappointments. Three-time BDO world champion, Durrant performed solidly in his maiden PDC season last year, reaching numerous semi-finals but that may not be enough here and Bully Boy should be favoured for the win.

Gary Anderson and Daryl Gurney follow up to the oche for match 2. Anderson will have the Scottish crowd on his side and looked good during his Masters quarter-final demolition of Gerwyn Price so is the strong favourite for this tie. Any hope for Superchin can be found in his relatively strong record against The Flying Scotsman, who he has beaten eight times. That said, he has also lost eight times to this opponent, which will likely read nine by the time they are finished here.

An absolute blockbuster of a match on night one as world champions collide. The current world champ, Peter Wright is unstoppable at the moment, winning back-to-back trophies, the first of which changed his life forever. This, of course, was his New Year’s Day Ally Pally win over tonight’s opponent Michael van Gerwen, which he hasn’t looked back from. Another player to enjoy home support, Snakebite can beat MVG again here – if not in the overall tournament – especially given Mighty Mike’s problematic switch to his new Winmau darts, something Peter Wright knows all about. The Scot has won two of their last three encounters and MVG suffered an early exit to Jonny Clayton in the Masters. That though will sting and Snakebite could well feel the Dutchman’s wrath. Time will tell.

Nathan Aspinall meets John Henderson the first of nine challengers (contenders/local heroes) next. Aspinall’s growing reputation was further demonstrated with a strong performance at the Masters where he lost 11-10 in the semi-final to Michael Smith. Scottish Henderson will have the home fans rooting for him but Aspinall has more than enough to silence the crowd and get his debut DPL season off to the best possible start.

The last match of the night pits Gerwyn Price against Rob Cross. Price lost badly to Anderson at The Masters over the weekend so he will need to bounce back, something he is more than capable of. Voltage has been playing poorly for some time now and will need to find some form or he could face a tough tournament. He does have the quality to turn things around at least. The head-to-head between these two reads six wins each, but the real detail is that The Iceman has won four of their last five meetings and, as one of the favourites for the tournament, will want to get off to a great start.

It will be interesting to see how the crowd reacts to Price, given the boos that followed him venue to venue 12 months ago. At the World Championships, the dissent was rightly dimmed but his tetchy exit at the hands of Peter Wright (a Scot) and his previous beef with Gary Anderson (also Scottish) could see the noise against him grow once again. This could provide an avenue of hope for Rob Cross to get at least a point as the Darts Premier League gets rolling in 2020.