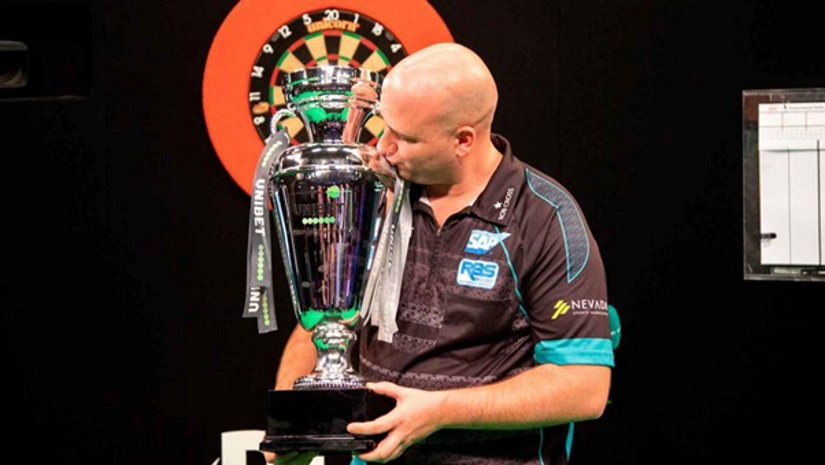 Rob Cross picked up the third major title of his career last weekend when he beat Gerwyn Price 11-6 in the final of the European Championship in Gottingen, Germany. Previously, the 2018 PDC world champion was runner-up in the Premier League and UK Open before winning the esteemed World Matchplay in Blackpool in July.

Earlier on Sunday Voltage saw off both Ricky Evans and Daryl ‘Superchin’ Gurney before playing out a fairly routine win against a disappointing Iceman. A seemingly subdued Price was never really in the final past the earlier sets and once Cross had established a two leg lead, the result was really only ever heading one way.

Cross landed five 180s and averaged 93.12 compared to Price’s lacklustre 84.51, allowing Voltage to break a four-match losing streak against Price, who for the first time, seemed to wilt in front of the crowd’s boos which normally inspire him.

In fairness to the Welshman, he may simply have been exhausted given the grueling shift he had put in in order to battle and overcome both Vincent van der Voort and Michael ‘Bully Boy’ Smith earlier in the day.

As for Voltage, he’ll now head into the remaining majors – this week’s World Series of Darts Finals, Grand Slam of Darts, Players Championship Finals and the World Championship – in good shape and good spirits, which will please his fans.

This week sees the World Series of Darts Finals at the AFAS Live in Amsterdam from November 1-3. Following Saturday’s second round, the tournament concludes across two sessions on Sunday, with the afternoon’s quarter-finals followed by the decisive evening session, which will include the semi-finals and final.

Draw wise, US Masters champion Nathan Aspinall will play Poland’s Krzysztof Ratajski in the first round, with the winner to face Daryl Gurney. German Masters finalist Gabriel Clemens will take on Jermaine Wattimena, before one of them will play Dutch legend and five-time World champion Raymond van Barneveld in what will be his final televised event in the Netherlands ahead of retirement.

Three-time champion Michael van Gerwen leads the 24-player field in an event that is the climax of the five international World Series of Darts events held worldwide in July and August.

James Wade is the defending champion and is rated by Betway at 22/1 to defend his title. Mighty Michael van Gerwen is unsurprisingly the 11/8 favourite to win yet another TV title, this one in his homeland, so will be in confident mood. The Machine, who beat Michael Smith in last year’s final, will play either Wayne Jones or Jonny Clayton as the number one seeds enter into proceedings on Day Two.

Recently-crowned European champion Rob Cross is next in the running at 7/1 while Peter ‘Snakebite’ Wright is 8/1 ahead of 10/1 shot Gary ‘The Flying Scotsman’ Anderson.

Both Daryl Gurney and last week’s runner up Gerwyn Price are priced at 16/1, while you can get 20/1 on both Dave Chisnall and Mensur Suljovic, also at Betway.

QUICK GLANCE AT THE WORLD SERIES OF DARTS FINALS