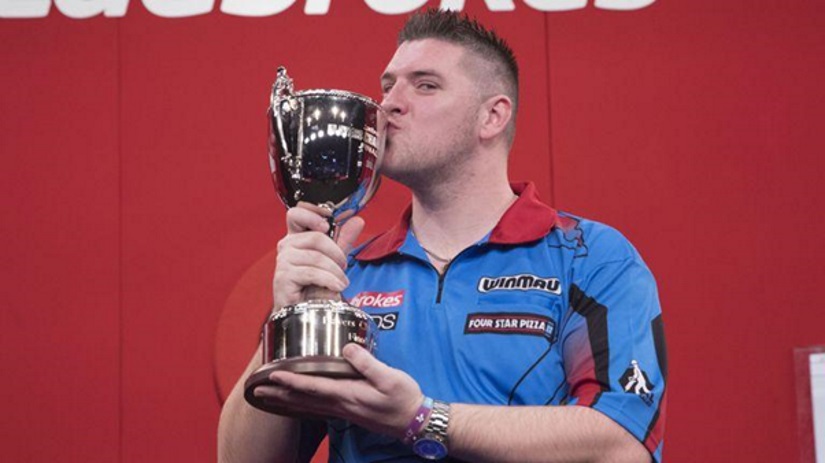 Daryl Gurney claimed the second televised title of his career on Sunday after he overcame Michael van Gerwen 11-9 in the Players Championship Finals final. Superchin averaged 96 compared to MVG’s 100 in a tight match that could have gone either way at almost any point, but Gurney held his nerve to see out the win and pick up his second win since the 2017 World Grand Prix.

Van Gerwen, who has won this event on the last three occasions, went into the match and the tournament as the favourite, which only intensified after he beat Gary Anderson 11-9 in an epic semi-final earlier in the evening.

Northern Irishman Gurney, who beat Danny Noppert 11-3 in the semis, proved himself to be stubborn opponent however and managed to keep the score level at 6-6 as the opening 12 legs all went with throw. MVG was the first player to make a break, beating Gurney’s throw in the 13th, only for his rival to break back immediately and then maintain his own throw to move 8-7 ahead.

Mighty Mike then hit back hard with back-to-back leg wins and looked to be the likely winner only to uncharacteristically miss the double 16 allowing Gurney back in with a chance. It was a chance he took nicely thanks to an 88 checkout. He then chucked a 13-darter to move one leg away from victory, which he he soon claimed after landeding a brilliant bullseye finish to take out 85 and win the tournament at the Butlin’s Minehead Resort.

A preview of the PDC Darts World Championship

The next event on the calender, of course, is the 2019 PDC Darts World Championship, the biggest event of the year. The draw and schedule for the event, which will take place at the Alexandra Palace from December 13 to January 1, has been set, so players can begin planning their route to darting immortality.

This year’s event will see the largest field in history with 96 players entering the tournament rather than the usual 72. The extra 24 qualifiers include, for the first time ever, two female contenders in Anastasia Dobromyslova and Lisa Ashton. The 32 seeded players from the PDC Order of Merit will all enter the event in the second-round and have been drawn to play a winner from the 32 first-round matches.

Reigning World Champion Rob Cross and Lakeside Women’s Champion Lisa Ashton will headline the opening night of the £2.5 million event, kicking off 16 days of top darts action. Voltage, as Cross is known, will play the winner of the tournament’s opening fixture between Jeffrey de Zwaan and Indian Qualifier Nitin Kumar. Making her Ally Pally debut, Ashton will take on Dutchman Jan Dekker, also on the Thursday.

By day two, twice World Champion Gary Anderson will kic off his campaign looking for his third title and will play one of Paul Nicholson or Kevin Burness. World number one Michael van Gerwen enters the event on Saturday December 15 to play either Alan Tabern or Raymond Smith, while former finalist Peter Wright, gets going on the Sunday, as does Dave Chisnall.

The retiring five-time World Champion Raymond van Barneveld begins on Monday December 17 against one of Matthew Edgar or Darius Labanauskas, while last week’s winner Daryl Gurney steps up to the oche for the first time on Tuesday December 18. James Wade, Michael Smith and Simon Whitlock all get chucking on the Wednesday and two-time World Champion Adrian Lewis opens his bid for a third Ally Pally title on Thursday December 20. Also on the Thursday, Steve Beaton, Stephen Bunting and Mensur Suljovic kick off their campaigns, one day before Gerwyn Price goes on the Friday, which concludes the second round.

As always, the third round is split on the side of the Christmas break, with the fourth round being played on December 27-28 before the quarter-finals on December 29. The semi-finals will take place on Sunday December 30 and will be followed on Tuesday January 1 by the final ,where the last two standing will battle it out for the Sid Waddell Trophy. Early prices are available now at Betway but our darts betting preview will be here next week.

Third Round (Best of 7 sets