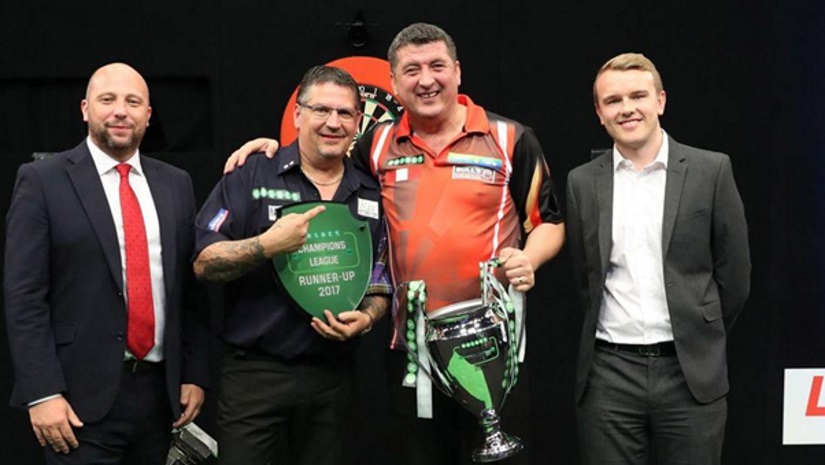 The next big PDC event on the sporting calendar is the Champions League of Darts which is set to be broadcast on the BBC on September 22 and 23. While we await betting prices — and indeed any action whatsoever this week — we give you a sneak peak as organisers have made the draw for the tournament that will be played in Brighton one month from now.

After the first two editions of the Champions League were staged in Cardiff the tournament has now relocated to the Brighton Centre to replace Brighton’s hosting of a Premier League night. Locals will now have the pleasure of seeing the PDC’s leading eight players all competing in a live televised event.

At the draw, the chairman of the PDC, Barry Hearn, talked of his pride in bringing the tourney to the South Coast and how popular the event has now become.

A look at the draw

The draw itself threw up some great opening ties. World number one Michael van Gerwen was naturally seeded in Group A and is joined there by recent World Matchplay winner Gary Anderson, 2017 World Grand Prix champion Daryl Gurney plus Dave Chisnall.

This means that in the opening match of the 2018 event Mensur Suljovic will face-off against world champion Rob Cross, who will be making his Champions League debut. This match will lead into Peter Wright going head to head against Simon Whitlock, followed by a Gary Anderson and Daryl Gurney battle and lastly, Michael van Gerwen versus Dave Chisnall.

The round-robin phase continues in the second session on Saturday evening before play carries over into Sunday afternoon, where the top two players from each group will compete for the title in the semi-finals and final.

Saturday, 22 September (18:30 BST)
There will be four matches consisting of the winners of the first group plus the two losers from both groups.

Sunday, 23 September (13:00 BST)
There will be four matches consisting of the remaining group matches, deciding on the top two qualifiers from each group.